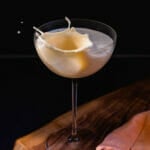 Everyone loves a Brandy Alexander: creamy, sweet and boozy! Mix up this classy dessert drink recipe with brandy and Creme de Cacao.

Want to mix up a Brandy Alexander? It’s easier than you think…and a creamy, boozy delight. This sophisticated cocktail wasn’t on our radar until we started mixing up dessert cocktails along with our regular fare. And my, is it fantastic! This simple cocktail is equal parts creamy, intriguing, and delicious: a mix of Cognac with cocoa liqueur. It’s almost like a grown up version of the White Russian…and we’re here for it!

Ingredients in a Brandy Alexander

The Brandy Alexander is a dessert cocktail made with equal parts brandy, creme de cacao liqueur, and heavy cream. The first printed recipe for an Alexander was in a 1916 cocktail book, The History of Mixed Drinks by Hugo Ensslin. The original recipe used gin instead of brandy. Over time, brandy or Cognac became the liquor of choice. It’s now on the list of the International Bartender Association’s IBA official cocktails, meaning that it has an “official” definition. The modern Brandy Alexander recipe is equal parts:

Note: You can also make a frozen Brandy Alexander by substituting 2 scoops vanilla ice cream for the heavy cream and blending it in a blender. This is a traditional variation on the Grasshopper and Mudslide as well. Of course, we prefer the traditional cocktail shaker version!

Why is it called Brandy Alexander?

Great question! The exact origin of the drink’s name is unknown. But the most popular theory is that it was invented by bartender Troy Alexander at a New York City restaurant.

Apparently, Mr. Alexander created a special white drink to honor of Phoebe Snow, a fictional marketing campaign character invented to promote a clean burning type of coal used in train travel. Her white dress inspired the creamy white look of the drink! (Of course, we now know that coal is one of the highest polluting fossil fuels on the planet…but we digress.)

Let’s talk more about each of the ingredients…shall we?

Creme de cacao is most famous for its use in the Grasshopper, but the Brandy Alexander is a close second. Despite it’s name, there’s no cream in it at all! Here’s a little more about this specialty liquor:

You can use any type of brandy in a Brandy Alexander recipe: but the top of the line is Cognac! Cognac is a type of French brandy, a liquor made from distilling wine. There are several grades of Cognac that designate how long it’s been aged:

Watch out, bottles of XO can be upwards of $200! No need to go that high-end, of course. You can use a mid-priced VS or VSOP Cognac for this cocktail.

How to make a Brandy Alexander (basic steps)

Once you’ve got your Cognac, creme de cacao and cream, there’s nothing to a Brandy Alexander! It’s a traditional shake and strain cocktail.

And that’s it! Let us know what you think of this Brandy Alexander recipe and what occasion you serve it for. It’s one of our favorite creamy dessert cocktails!

The inspiration for the Brandy Alexander may go back much further than 1916: it’s possibly related to a drink from the 1680’s! It reminds us of a drink Milk Punch, made with brandy or bourbon, milk, sugar, and vanilla extract. The drink was first written down in 1688 in Scotland, and the first mention in a cookbook was in 1711. It’s even traditionally garnished with grated nutmeg!

The combination of dairy with Cognac and flavors of vanilla and chocolate can’t be disputed here. Milk Punch is a traditional New Orleans drink, so it’s possible that the inventor of the Brandy Alexander took inspiration from sipping on that cool creamy beverage.

Want more with brandy or Cognac? Here are a few brandy cocktails that are full of flavor:

When to serve a Brandy Alexander

The Brandy Alexander is a dessert cocktail that’s perfect when you need a sweet treat. Try it for a:

Everyone loves a Brandy Alexander: creamy, sweet and boozy! Mix up this classy dessert drink recipe with brandy and Creme de Cacao.