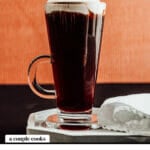 This Mexican coffee recipe is a variation on Irish coffee with a Mexican spin, starring Kahlua, tequila and cinnamon. It’s stunning!

Here’s our new favorite variation on the classic Irish coffee, and it’s a stunner. Try this Mexican Coffee! If you were looking for a traditional Mexican way to serve coffee, this is not it. It’s a classic cocktail variation, much like the Mexican mule or the Bloody Maria. Sure it’s basic, but it’s darn delicious. Mix two Mexican liqueurs into coffee — tequila and Kahlua — and you get an irresistibly delicious spin on spiked coffee. Top it with cinnamon, and it’s hard to beat.

What’s in this Mexican coffee?

This Mexican coffee recipe is one of many spins on the classic Irish coffee. Irish coffee is coffee with Irish whiskey, and you can swap in all sorts of liqueurs to create new drinks. The concept is called carajillo in Spanish: and it’s popular in Spain and other Latin American countries like Mexico, Colombia and Cuba. In fact, it’s a more traditional Mexican coffee recipe (see below).

The Triple Sec orange liqueur is reminiscent of a margarita, and adds a lot of depth and nuance to this drink. You won’t be able to put it down!

Looking for a more traditional spin on Mexican coffee? Try this Carajillo recipe! Carajillo is coffee spiked with Licor 43, a Spanish vanilla liqueur, and it’s a popular after dinner drink in Mexico. This specific variation is a spin on classic Spanish carajillo, which uses brandy instead of Licor 43. After tasting it, Licor 43 is absolutely worth the splurge: the way it pairs with coffee is simple perfection.

Triple Sec vs Cointreau: which to use?

This Mexican coffee is delicious with tequila and Kahlua: but add Triple Sec and it’s over the top delicious. Triple Sec is an orange liqueur that’s used in classic cocktails, the most famous of which is the classic margarita. But Cointreau is also often used, and is a popular ingredient for the margarita as well (some say it makes the perfect margarita). What’s the difference between Triple Sec vs Cointreau?

For the homemade whipped cream: a few tips!

To make a next-level Mexican coffee, please promise us that you’ll use homemade whipped cream? Cool Whip absolutely will not do here (and that’s an order!). It’s actually very easy to make at home, and takes just a few minutes to whisk up with a bowl and spoon. Here’s what to know:

There are many variations on spiked coffee related to this Mexican coffee recipe! Here’s a recap on some of the variations we mentioned earlier, and some other favorites:

Want more coffee cocktails? There are so many. Try the Espresso Martini, White Russian, Coffee Martini and more.

When to serve Mexican coffee

This is one classy classic cocktail! It’s best as an after dinner drink, but you can serve it anytime. Try it as a:

This Mexican coffee recipe is a variation on Irish coffee with a Mexican spin, starring Kahlua, tequila and cinnamon. It’s stunning!