Cream of Coconut vs Coconut Cream 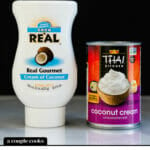 What’s the difference between cream of coconut vs coconut cream? Here’s how to make sure you get the right ingredient for your recipe.

Cream of coconut vs coconut cream: what’s the difference? We’re glad you asked. Because while they might sound like exactly the same thing, they’re anything but! There’s a distinct difference between the two products. They are not interchangeable! Here’s what to know about when to use each.

Cream of coconut vs coconut cream: the differences

What’s the difference between these coconut products? Here’s a breakdown:

They are not interchangeable!

Coconut cream is unsweetened and very thick; cream of coconut is very sweet with a syrupier texture. This means that recipes that call for each are optimized for sugar content.

The original piña colada recipe calls for cream of coconut, but some pina colada recipes may call for coconut cream and simple syrup. Make sure to read your recipe closely, because if you substitute the wrong one, you’ll end up with a bitter or overly sweet drink.

What can you make with coconut cream?

What can you make with cream of coconut?

Cream of coconut is often used in tropical drinks, the most famous being the Classic Piña Colada. It’s also used in the Painkiller, Coconut Martini, and the Blue Hawaiian.