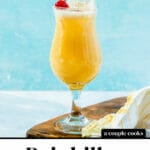 The Painkiller cocktail is like a piña colada…but better! This tropical pineapple drink features aged rum, cream of coconut and orange.

So you love piña coladas? Then you absolutely must try a Painkiller cocktail! This 1970’s tropical drink is a spin on the classic piña colada, but even better. It stars aged rum, cream of coconut, and orange juice, which add intrigue and nuance to this sophisticated drink. Top it off with a little grated nutmeg, and wow! Both Alex and I raised our eyebrows in appreciation after first sip. It’s fruity, tropical, and just darn tasty. Sip these on the patio or by the pool, or in the winter when you’re dreaming of summer sun.

What’s in a Painkiller cocktail?

The Painkiller cocktail was invented in the 1970’s in the British Virgin Islands at a bar called Soggy Dollar Bar. It was originally made with Pusser’s Rum, a type of rum made using the British Royal Navy recipe. The drink was trademarked in the 1980’s so that if it’s included on a menu, it should include the traditional Pusser’s Rum. Of course if you’re making it at home, you can use any type of aged or dark rum! Here are the ingredients you need for a Painkiller cocktail:

The most important thing about these ingredients: make sure to buy “cream of coconut,” not coconut cream. What’s the difference?

What if you accidentally buy coconut cream for the Painkiller? You can save your drink! Use ½ ounce coconut cream and ¾ ounce simple syrup.

Many rum cocktails use white rum or dark rum. But the Painkiller cocktail uses a whole other category of this liquor: aged rum or golden rum! Aging rum for a few years gives it a complex flavor. Golden rum can have notes of vanilla, coconut, almond, citrus, or caramel. The aged rum that we used here was Brugal Añejo Rum.

Can’t find golden or aged rum or don’t have it on hand? You can substitute dark rum and the drink will work. You can also use white rum, but it’s not quite the same. It does work in a pinch!

Top it off with grated nutmeg!

It’s a minor detail, but the garnish of this drink really does take it over the top. Buy whole nutmeg, then used a microplane or grater to grate a little on top. Nutmeg has a warm, aromatic flavor with undertones of clove. Other drinks that use grated nutmeg on top? The Milk Punch or Brandy Alexander: two creamy drinks that are similarly delicious.

There are so many more great cocktails starring pineapple juice! Once you buy a jug for this recipe, you’ll simply have to make more! Here are some of our favorite tropical pineapple cocktails:

When to serve a Painkiller cocktail

The Painkiller cocktail is a tasty spin on the pina colada! It’s great as a:

The Painkiller cocktail is like a piña colada…but better! This tropical pineapple drink features aged rum, cream of coconut and orange.

*To convert to tablespoons, multiply the ounces by 2 (½ ounce = 1 tablespoon).