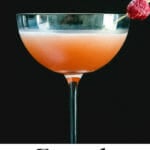 Here’s a sophisticated cocktail that’s calling your name: the French martini! This martini is hardly related to the classic dry martini at all. It’s a fruity and balanced, featuring a fancy French black raspberry liqueur and pineapple juice. Each sip is so intriguing and nuanced, it’s hard to put the glass down! This one’s become a favorite over here. Here’s how to make the perfect French martini!

What’s in a French martini?

The French martini is a fruity spin on a vodka martini made with raspberry liqueur and pineapple juice. It might seem like a retro classic cocktail, but it was invented in the 1980’s by New York bartender Allen Katz. It’s gone on to become a sort of modern classic! This cocktail makes the list of International Bartender Association’s IBA official cocktails. That means it has an official definition of how to make it. The ingredients in a French martini are:

Don’t want to spring for Chambord? The Clover Club is a similar cocktail made with raspberry syrup and gin!

How to make a French martini (2 basic steps!)

It’s so easy to make a French martini, there’s barely anything to it! This drink follows the basic “shake and strain” model for cocktails:

What’s Chambord? Is it worth buying?

The French martini is a drink for adventurous home bartenders because it requires a special ingredient: Chambord! It’s got a beautiful gold and purple round bottle that makes you feel like a professional bartender. But what exactly is it? Here’s what to know:

The French martini is a flavored martini: it’s nothing like a classic! The classic martini is made with gin and dry vermouth. It’s extremely dry and and can be polarizing to some. Flavored martinis are a modern invention: built on the vodka martini. Most of them drop the vermouth…so they’re hardly a martini at all! Here are some of our favorite martini recipes, both classic and flavored:

If you love a French martini, you might like these France-inspired cocktails! Here are a few more to know:

When to serve a French martini

This French martini is sophisticated and memorable. It’s great as a:

Here are more of the best vodka cocktails to use up the rest of the bottle: