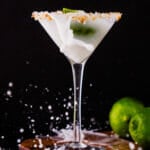 This coconut martini is creamy and dreamy, featuring vodka and lime juice! Add a toasted coconut rim and it’s perfection.

There’s something about the tropical creaminess of coconut that makes it perfect for cocktails. It’s best known for the classic piña colada, but we’ve got a more unique spin on it that you’re sure to love. Try the Coconut Martini! Inspired by our popular coconut margarita, this one features vodka instead of tequila and my is it tasty! It’s cool and creamy, with a toasted coconut rim that makes every sip more irresistible.

What’s in a coconut martini?

The coconut martini is a spin on the vodka martini using cream of coconut and vodka. Vodka martinis have essentially nothing to do with a Classic Martini, except for the glass. A dry martini has just gin and vermouth, and tastes intensely dry with a burning finish. Vodka martinis, on the other hand, are just an excuse to pair sugar and vodka. You can essentially make a vodka martini of any flavor, like watermelon, chocolate, coffee, or raspberry.

There are two vodka martinis that are officially on the list of International Bartender’s Association IBA official cocktails: the lemon drop martini and espresso martini. All other vodka martinis are up to the bartender. So here’s our original spin on a coconut martini:

Make sure to grab cream of coconut! Here’s why:

The most important thing to note about making a coconut martini: use cream of coconut! Avoid using coconut cream, which is unsweetened and not intended for cocktails. Here’s what to know about this ingredient, and you can read more at Cream of Coconut vs Coconut Cream:

More with cream of coconut? Try popular coconut cocktails like the Piña Colada, Painkiller, Chi Chi, or Bushwacker. And of course, don’t forget the Coconut Margarita!

What if you accidentally buy coconut cream?

How to make a coconut martini: basic steps

Got the right ingredients? Let’s make this coconut martini! Here are the basic steps (or jump to the recipe):

When to serve a coconut martini

The coconut martini recipe is fun and festive, with a lightly tropical, creamy flavor. Serve it as a:

This coconut martini is creamy and dreamy, featuring vodka and lime juice! Add a toasted coconut rim and it’s perfection.