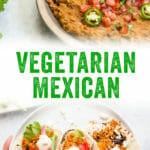 HHere are all the best vegan and vegetarian Mexican recipes: from tacos to enchiladas to refried bean dip! Perfect for eating plant based.

You might immediately think of carnitas and taco meat, turns out the Mexican style cuisine is perfect for loading on the veggies. Why? The spiced, tangy, and savory flavors present in this style of cooking bring huge flavor to plant based eating. Tacos, enchiladas, nachos, tostadas and more can easily be made vegetarian by using refried beans, lentils, and even jackfruit as a stand in for meat. Load on the beautiful veggie toppings and you’ve got a seriously plant based meal. Here we’ve rounded up all of our favorite vegetarian Mexican recipes — you’ll notice that we have so many, we’ve highlighted 15 and then just kept going! So keep reading until the end.

Before we start: this is not a list of authentic Mexican dishes! Most of the recipes below are inspired by Mexican flavors and style. For authentic Mexican style recipes, head to this list at Saveur. See also: Easy Mexican Recipes and 20 Tasty Mexican Appetizers. 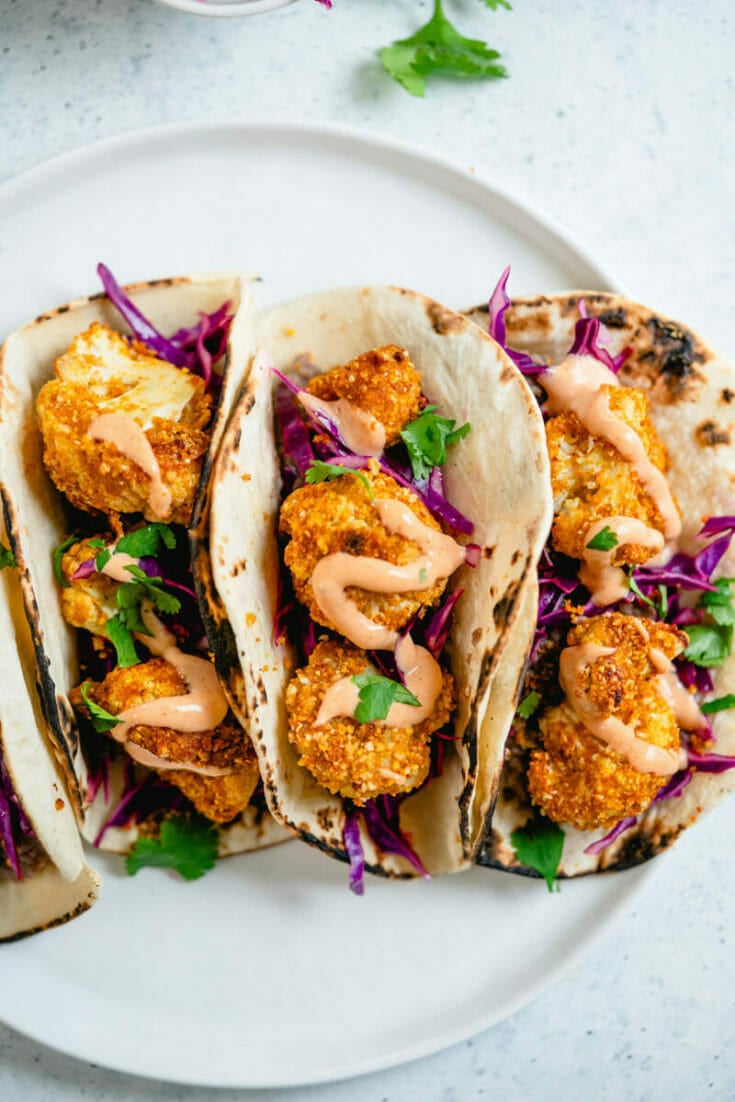 These crispy cauliflower tacos are like a vegetarian fish taco, and they've become one of our most popular Mexican-style vegetarian recipes! The charred taco is filled with breaded cauliflower (baked, not fried), refried beans, and a silky sauce. They’re all about one thing: big flavor!— even without the meat. 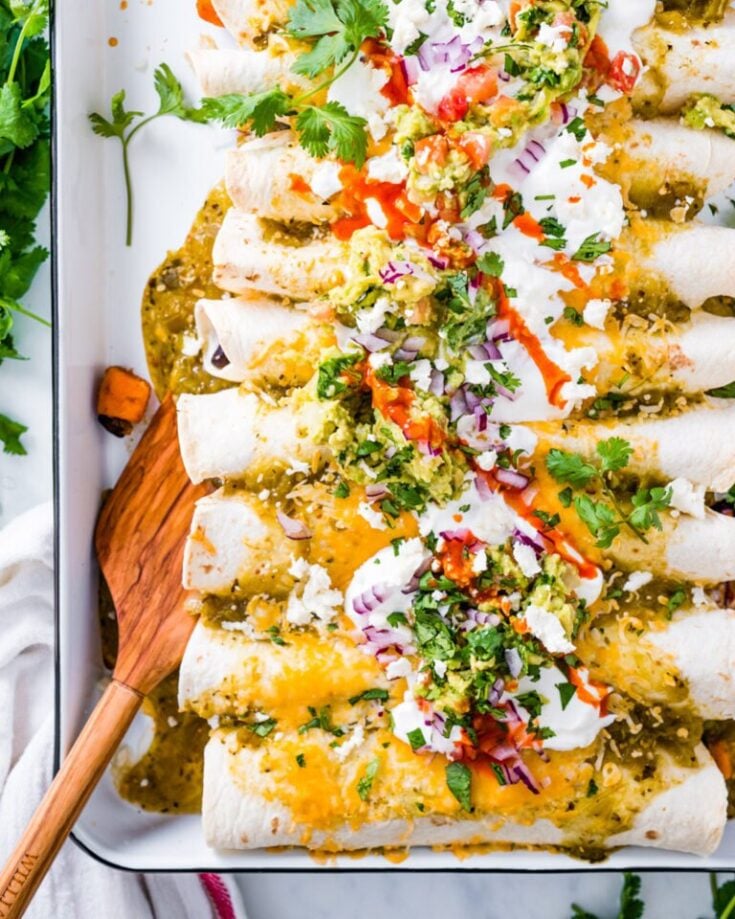 Next up in our vegetarian Mexican recipes: sweet potato black bean enchiladas! MY, are they delicious! The sweet potato filling is a stroke of genius combined with savory black beans. It makes these vegetarian enchiladas super satisfying, even for meat eaters! They’re smothered in salsa verde and Colby cheese. 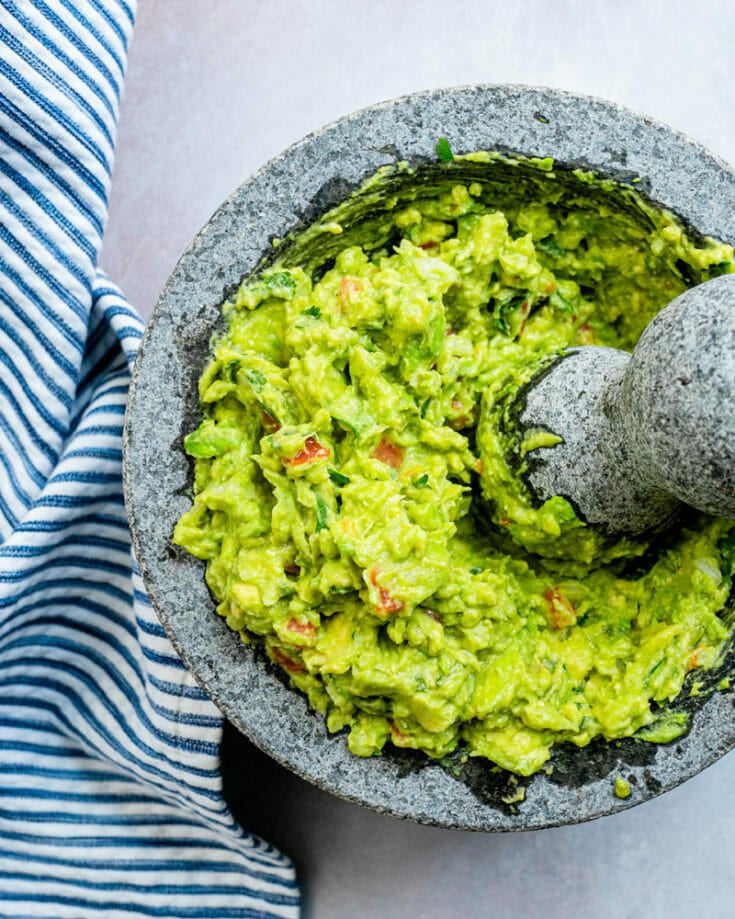 It’s a home run every time! When we serve it, a chorus of “Wow’s” fill the room. (Really. Not hyperbole!) What makes it so great? It’s classic and has the perfect balanced flavor: perfectly savory, creamy, and tangy. Serve this classic vegan Mexican dip with tortilla chips and your guests — and you — won’t be able to stop eating it. 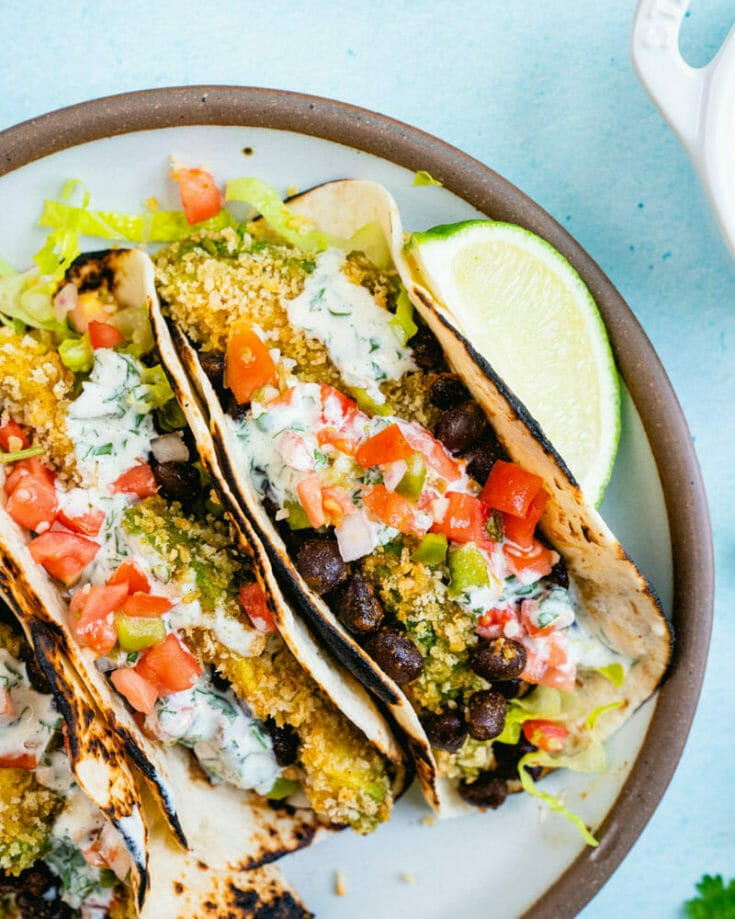 These crispy avocado tacos are destined to be your new favorite vegetarian Mexican recipe! You’ve got avocado fries, breaded and baked in a hot oven until crispy. Then top that with spiced black beans, pico de gallo, and the refreshing crunch of romaine lettuce. Drizzle on a creamy lime and cilantro sauce, and it’s heaven on a plate. It tastes like restaurant tacos, but it’s easy to whip up in your kitchen. 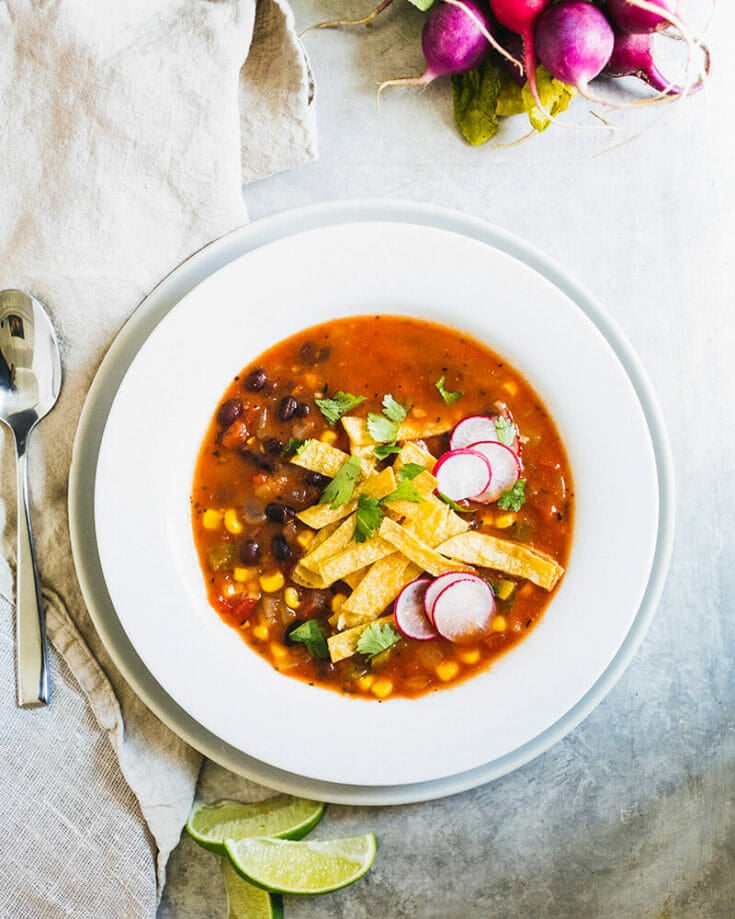 Here's one of our favorite vegetarian Mexican recipes because of the intense flavor it packs in just over 30 minutes! The secret here is adobo sauce from a can of chipotle chilis: it brings in a smoky flavor without adding too much heat! It's filled with black beans, peppers, and corn, and topped with homemade crunchy tortilla strips. It's a crowd pleaser every time. 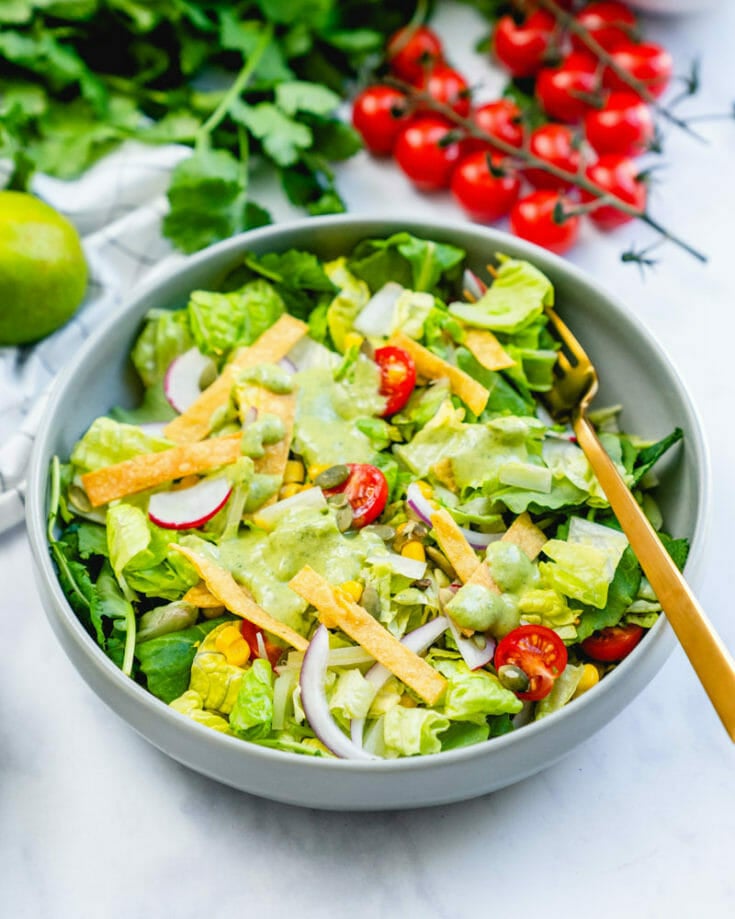 This Mexican salad is a chopped salad with Latin-style flavors: colorful veggies, cilantro lime salad dressing, and tortilla strips. It all combines into a super-flavorful dish that can be served as a side, or dressed up to work as a healthy main dish salad. It’s got 3 dressings to choose from, based on your tastes (easiest, easy and vegan). 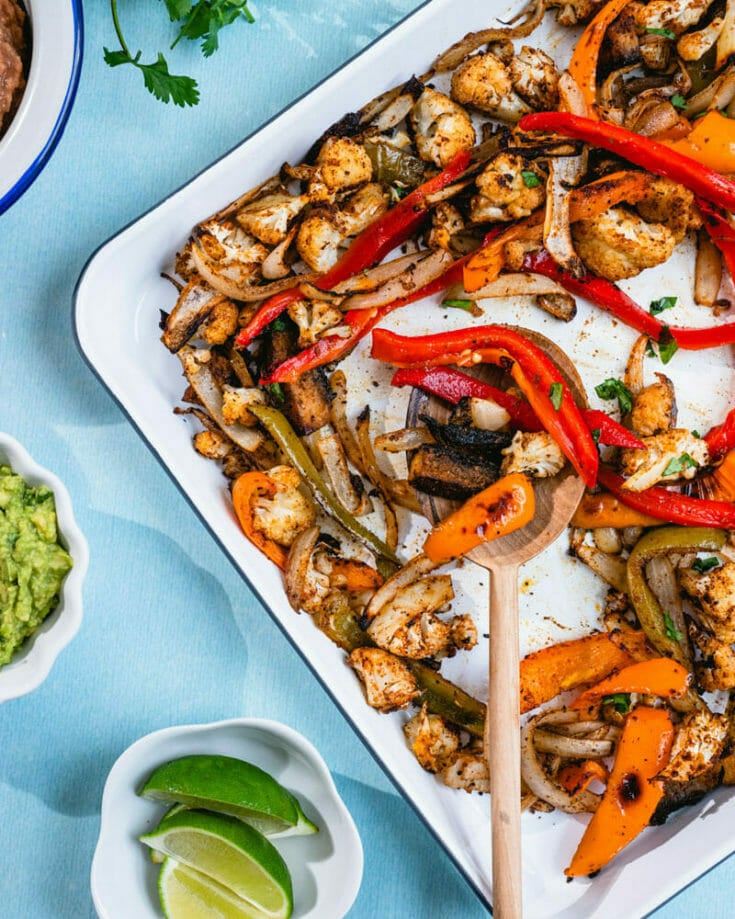 Vegan Fajitas (on a Sheet Pan!)

There’s no such thing as too many easy dinner ideas. So let us present our new favorite: these incredible vegan fajitas! Everyone loves this meal, even meat eaters. It’s a great way to make a fun healthy dinner where no one notices there’s no meat! Roast up lots of veggies on a sheet pan with spices, and serve with refried beans and “guac-ish,” a super fast version of guacamole. 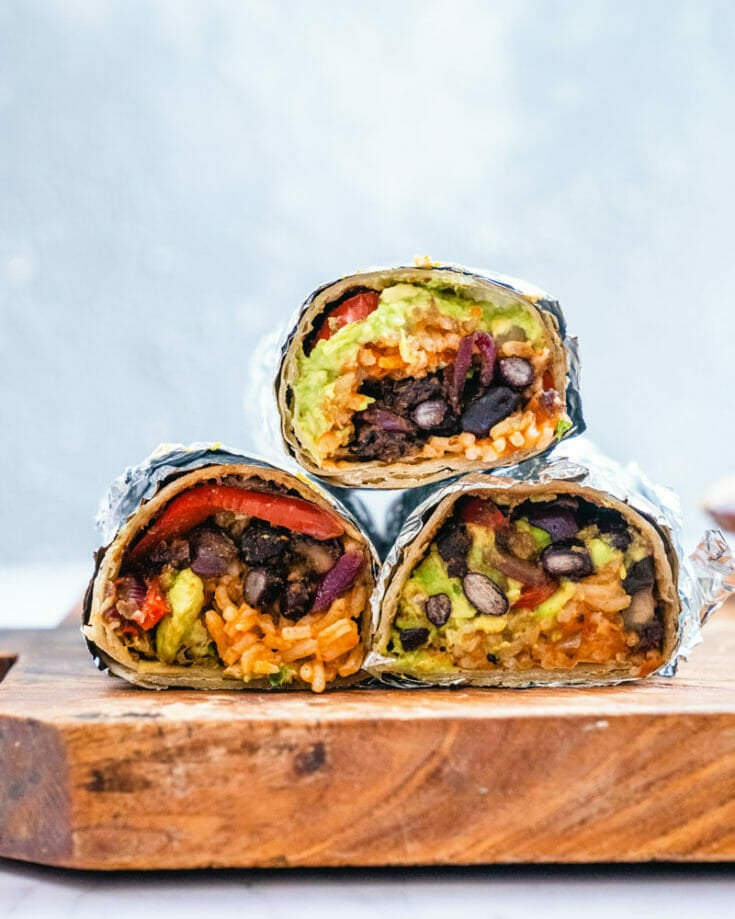 Something about all those tasty fillings snuggled cozily into a tortilla makes a burrito irresistible. This burrito is packed with flavor from Spanish rice (aka Mexican rice), seasoned black beans, peppers and onions, and mashed avocado. Even better, step it up with a zingy vegan sauce. 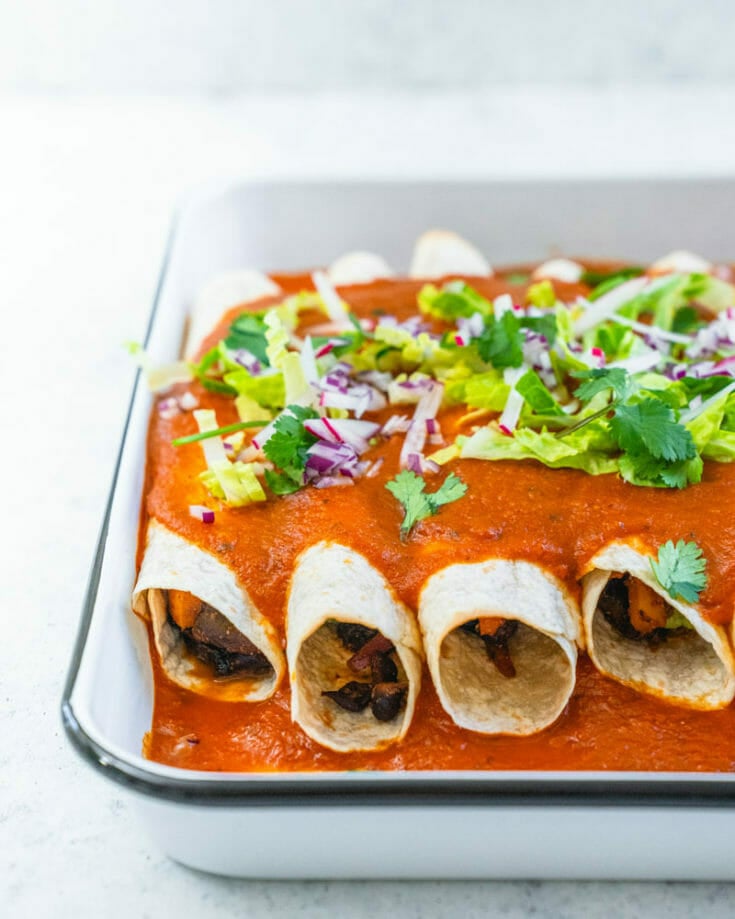 WOW is all we can say about this black bean enchiladas recipe! It tops the charts as one of our most crowd-pleasing plant based recipes…ever. Tortillas are wrapped around a veggie filling oozing with flavor, and it’s all doused in a zesty homemade enchilada sauce. With the crunchy veggie topping, this dish looks simply incredible. It tastes even better than it looks! 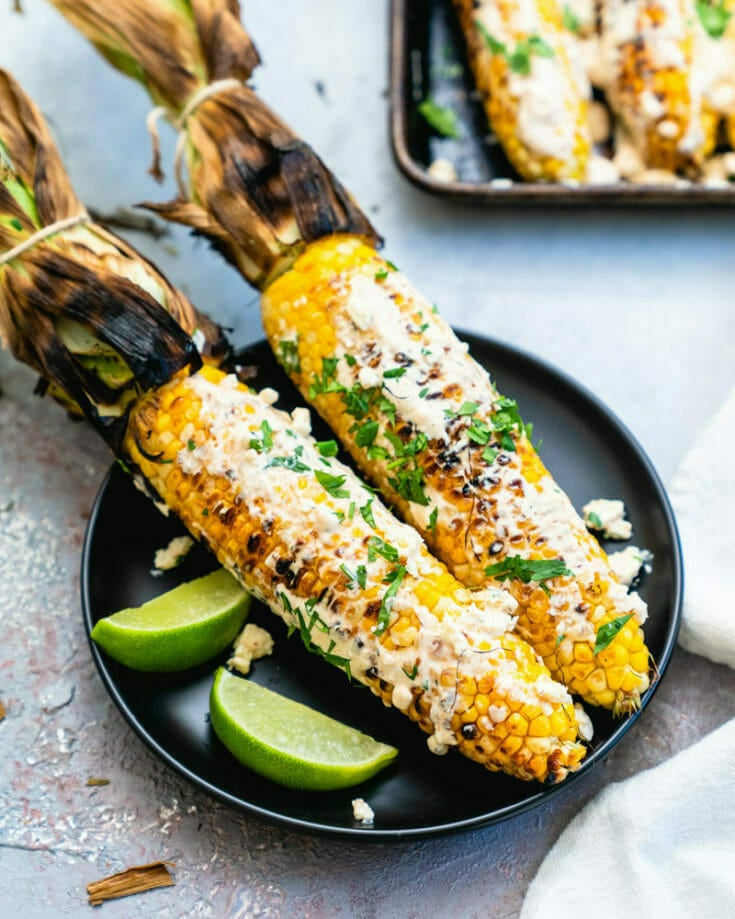 What makes elote (Mexican grilled corn) so irresistible is the contrasts of flavors and textures. Sweet corn is charred to smoky perfection on the grill. Then it's slathered in creamy mayo and sour cream sauce, seasoned with chili powder, and topped with chunks of feta or queso fresco cheese. The crunch of the corn against the creamy, messy sauce is pretty much to die for.

This refried bean dip is seriously tasty, but guess what? It has no cheese to speak of. Somehow it’s just as satisfying as a cheesy Mexican dip, without the extra calories. This one uses our Instant Pot refried beans, stovetop refried beans, or canned refried beans, mixed with green chilis and cumin. Top it with salsa fresca and it's a healthy spin on a bean dip that's seriously satisfying. 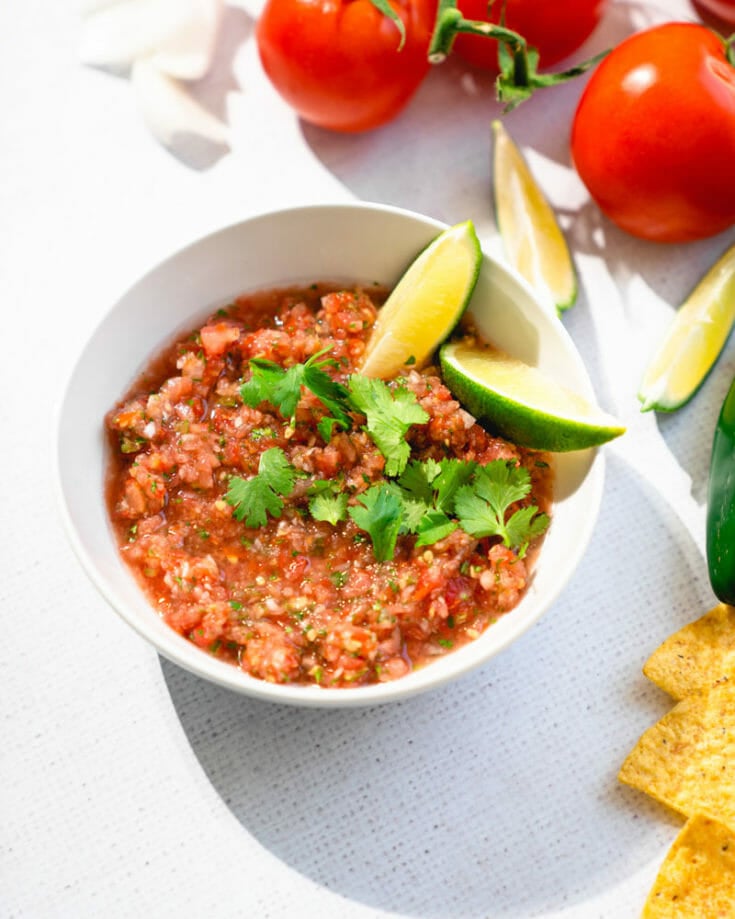 This salsa is classic but so savory and good, you won't be able to stop dipping chips! It's a classic salsa fresca: a tomato salsa using fresh tomatoes, onion, garlic, and jalapenos. It's tangy, it's savory, it's a little garlicky, and it's 100% WOW. 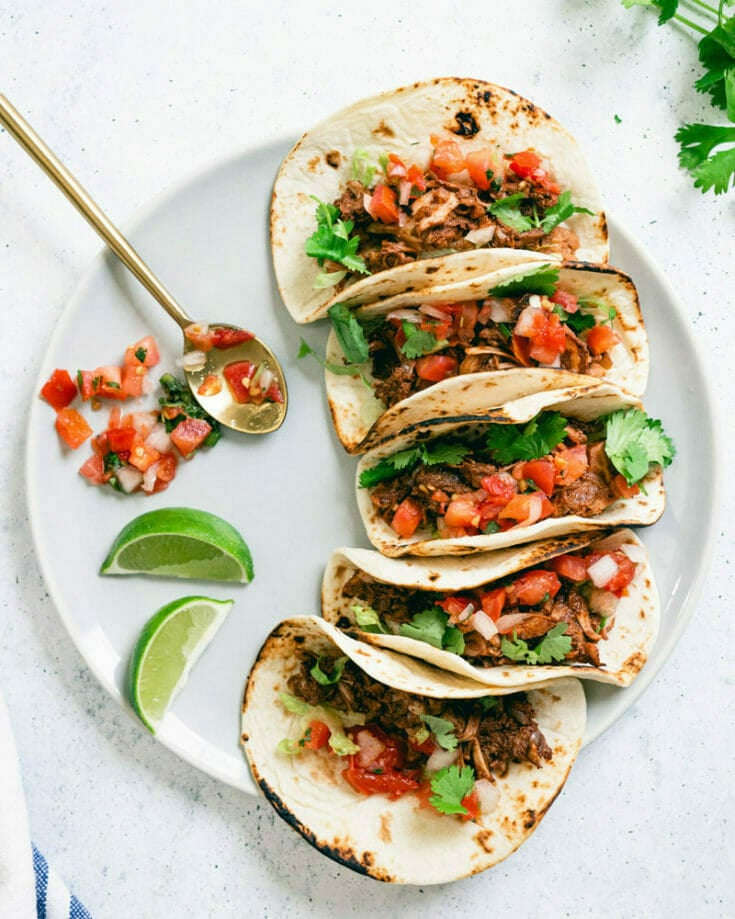 A fruit standing in for meat? We know, sounds a little odd. But turns out this tropical fruit magically mimics pulled pork in a way you'd never dream! This meaty filling is flavored with adobo sauce (from a can of chipotle peppers), tomato paste, cocoa powder, cumin, and oregano. Add salsa and serve with our easy refried black beans, and you've got dinner. 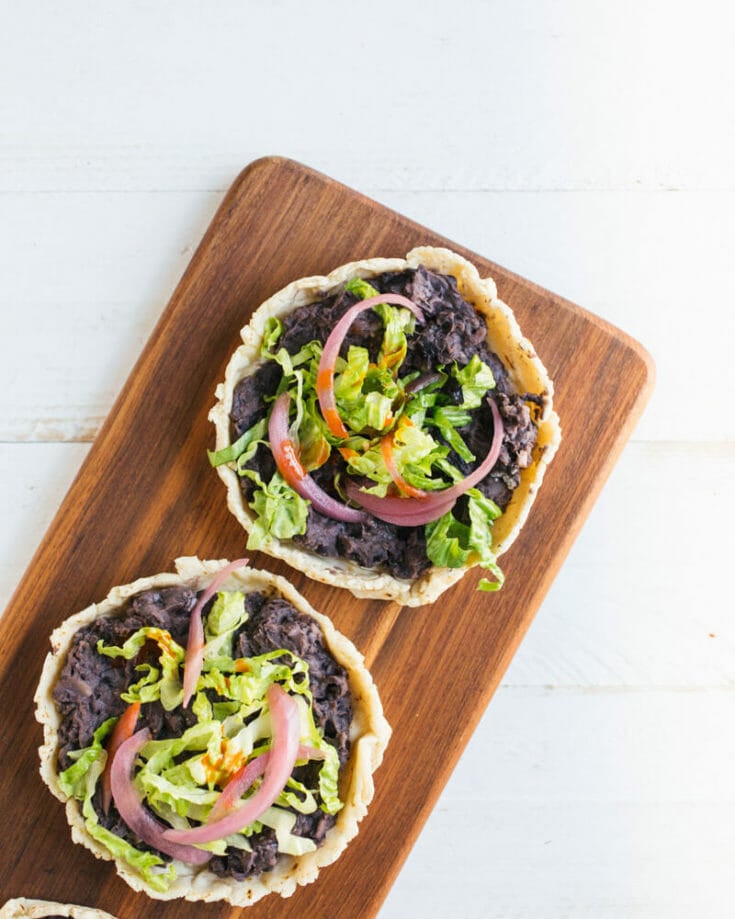 What are sopes? Sopes are a sort of thick tortilla with upturned edges, topped with meat, beans, and sauces. They’re actually quite simple to make at home, not nearly as fussy as making homemade tortillas. Tortillas can be difficult to press thin enough, but sopes are intentionally thicker and easier to press. Spread with refried black beans or pinto beans, then sprinkle with bright pink pickled onions and a bit of crunchy romaine. Then dollop away with cilantro lime crema, Mexican crema or cashew cream. Delish! 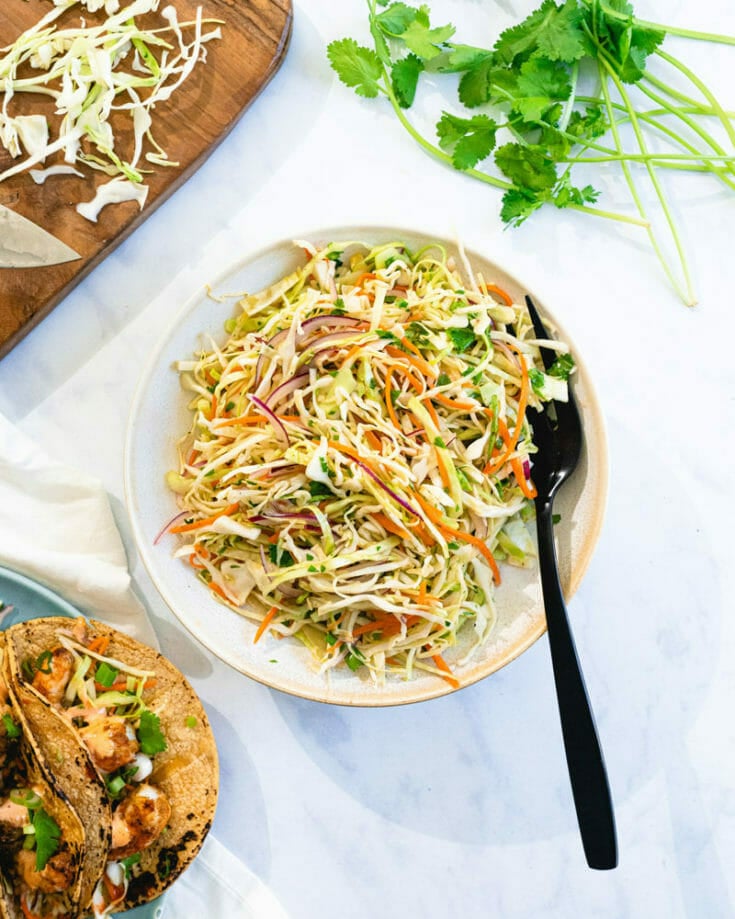 Here's a healthy spin on coleslaw that’s little lighter and fresher. This Mexican coleslaw recipe has no mayo, and instead focuses on fresh flavors: crunchy cabbage, red onion, cilantro, and cumin. It’s got both cumin seed and ground cumin for a double hit of flavor. Oh–and it doubles as a taco topping. 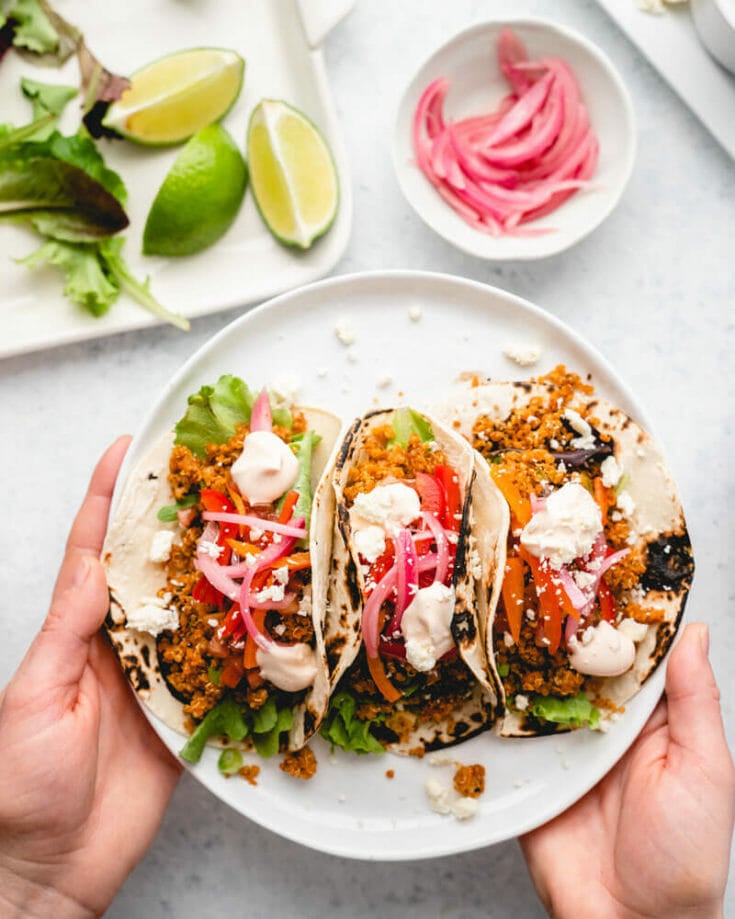 Another favorite in our vegetarian Mexican recipes...quinoa tacos! Quinoa…as a taco filling? Yes, these tacos are a bit outside the box, but they’re supremely tasty. The quinoa filling is toasted and mixed with taco spices and lime. Combine it with a bell pepper slaw, spicy sour cream (or cashew cream), and feta cheese, and you’ve got a new level of delicious. Oh and pickled red onions for color and crunch! 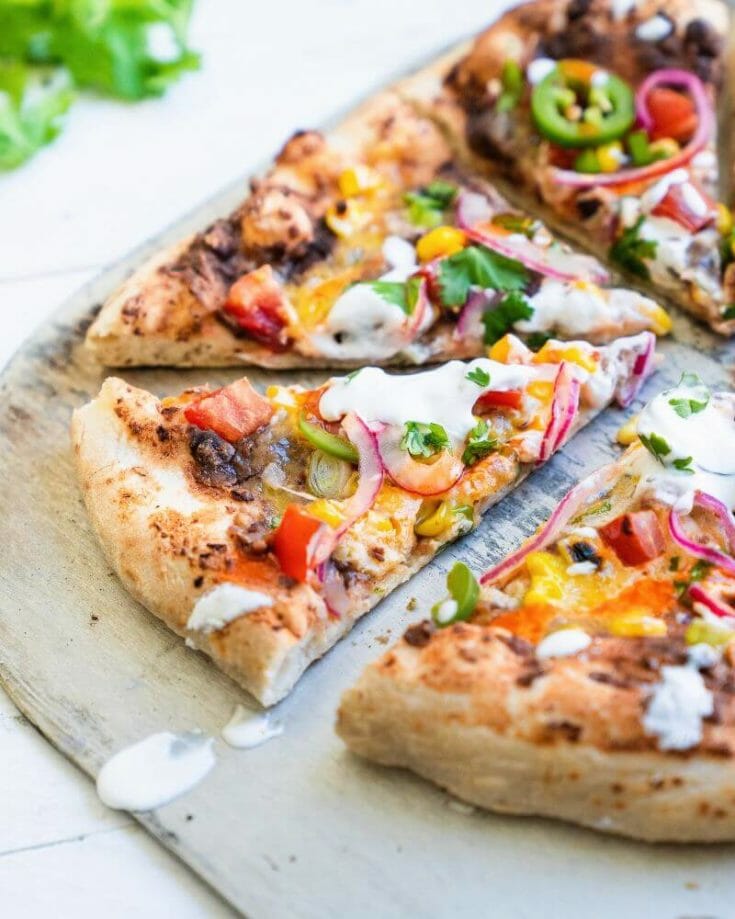 Here's vegetarian recipe that's not traditional Mexican, but a fusion: Mexican pizza! Why not combine the best of Italian and Mexican flavors into everyone's favorite food? Instead of tomato sauce, you'll use a layer of refried beans. To with Monterrey jack and cheddar instead of the typical mozzarella. And then layer with toppings: veggies, corn, cilantro, and the spicy crunchy of pickled jalapeños and onions. And then a little sour cream and hot sauce for good measure! 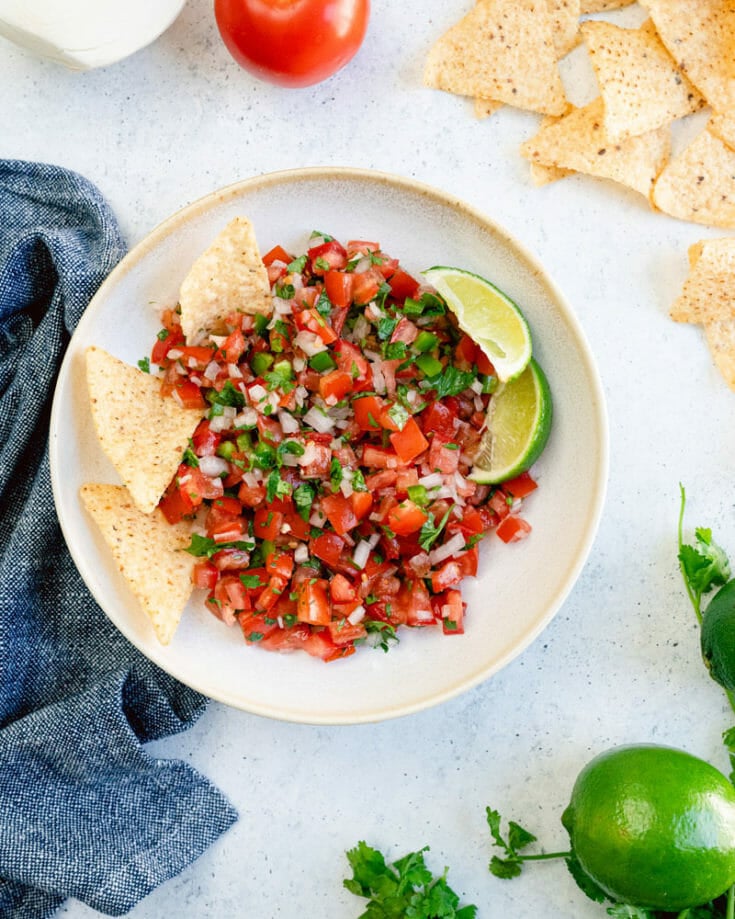 There’s something so carefree about pico de gallo. Perhaps because it conjures up images of consuming loads of fresh pico while watching the waves on the beach in Mexico? Whatever the case, if you’ve got ripe tomatoes, pico is the perfect place to start. Use it as a salsa with tortilla chips, use it on top of grilled or broiled salmon, or of course, throw it into a taco. 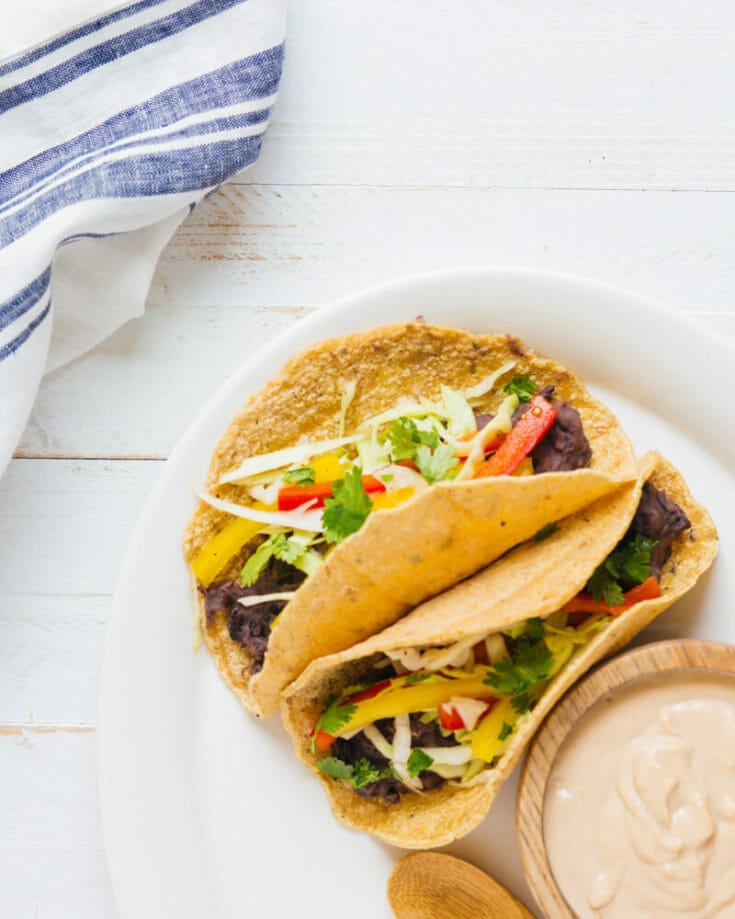 One of our top vegetarian Mexican recipes is our Simple Refried Black Beans. They take no time at all to make, and the savory flavor is unreal. So why not throw them into a taco? These refried bean tacos top the beans with a tangy, crunchy bell pepper slaw and cilantro. Then, they're dolloped with a vegan chipotle cream (or you could use sour cream with a little adobo sauce). They're to die for. 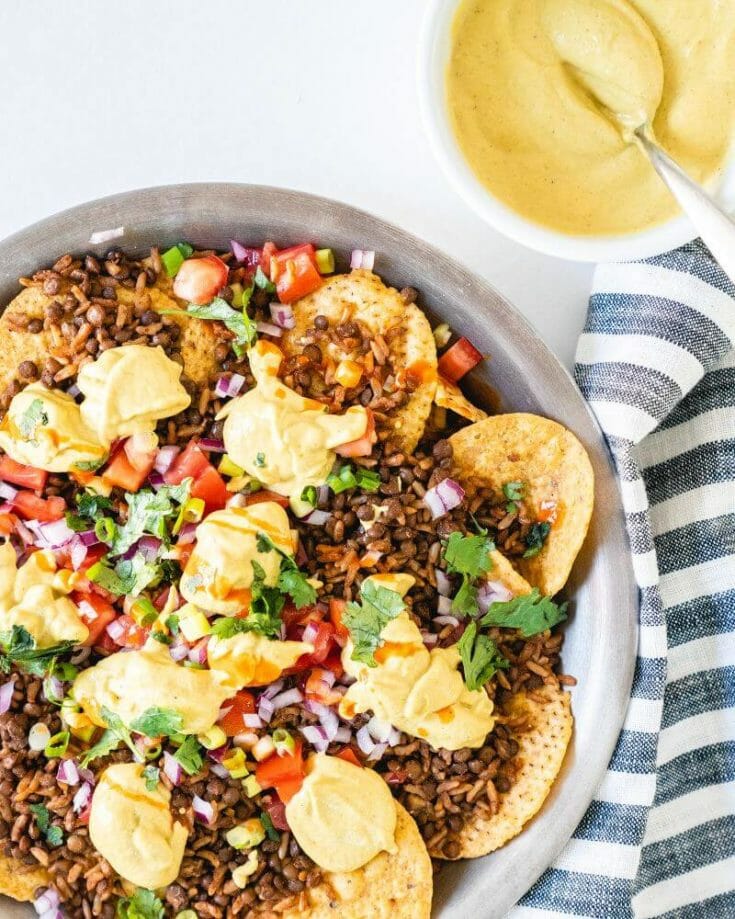 And rounding out this list of vegetarian Mexican recipes: nachos! And lentils on nachos: why not? These loaded vegan nachos are the best because they’re piled high with smoky, meaty lentils, crunchy veggies, and topped with our vegan nacho cheese. To keep them healthy, look for organic corn chips with minimal ingredients (ideally corn, oil, and salt).

These cauliflower tacos with breaded cauliflower, refried beans and silky Yum Yum sauce are all about one thing: big flavor!

Need more recipes? We have so many vegetarian Mexican recipes, we’ve continued our favorites list below. We couldn’t stop at just 15!