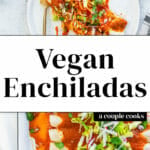 These vegan enchiladas are over the top delicious! Stuffed with black beans and guacamole, they’re doused in a zesty homemade red enchilada sauce.

WOW is all we can say about this vegan enchiladas recipe! It tops the charts (with our vegan lasagna and shepherd’s pie) as one of our most crowd-pleasing plant based recipes…ever. Tortillas are wrapped around a veggie filling oozing with flavor, and it’s all doused in a zesty homemade enchilada sauce. With the crunchy veggie topping, this dish looks simply incredible. And it tastes even better than it looks! Alex and my goal was a whole food plant based (WFPB) enchiladas recipe with no cheese substitutes or need for vegan cheese. With a few tasty tricks, it turned out even better than expected! Here’s how to make it.

What’s in the best vegan enchiladas?

Don’t let these vegan enchiladas fool you: they’ll satisfy people of all diets! They’re packed with zingy flavor and full of nutrients. Even better, there’s a lazy version and a version for when you have lots of time. Here’s what’s in these enchiladas (can you see it peeking out?):

If you have time, it’s absolutely worth making our Homemade Enchilada Sauce. Turns out, it takes just a handful of ingredients to get huge flavor. This full-bodied sauce is zingy, zesty, and you’ll never want to stop eating it. Here are a few notes on incorporating this sauce into these vegan enchiladas:

How to assemble these vegan enchiladas

Assembling these vegan enchiladas is the hardest part. How to make sure you have the right amount of filling so it doesn’t spill out? How to make sure the tortillas don’t split? Here are our tips:

Flour tortillas vs corn tortillas: which are better for enchiladas?

Our homemade guacamole recipe is so good, it’s worth making if you have time! But since storebought guacamole is so easily available, we’d recommend getting your favorite purchased brand to speed up prep time for the recipe. It takes about 15 minutes to make the guacamole. If you’re making of the components at home, we’d recommend the enchilada sauce instead.

But if you do have time, it’s worth making this incredible homemade guacamole, and you can use the extras as a side dish. You could also make it ahead and store it using this storage tip so it doesn’t brown: refrigerate it with 1/2″ of water on top of the guac. This serves as a barrier to the air and works like a charm!

Sides to serve with vegan enchiladas

These enchiladas are a stunning vegan dish that’s perfect for dinner parties or weeknight meals. What to serve with these vegan enchiladas to make it a full meal? We’ve got lots of options. Here are our favorite sides to serve with enchiladas:

This vegan enchiladas recipe is…

These vegan enchiladas are over the top delicious! Stuffed with black beans and guacamole, they’re doused in a zesty homemade red enchilada sauce.

*Prep time listed below does not include time for making enchilada sauce. This adds about 15 minutes to the prep time, since you can simmer the sauce while making the filling.