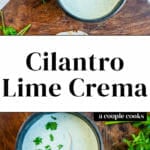 Here’s a tasty sauce that’s begging to be drizzled on just about anything: Cilantro Lime Crema! This Mexican-inspired sauce is perfect for dolloping on tacos and burrito bowls. At the same time, it’s just as delicious as a dip for sweet potato fries and grilled shrimp. It’s full of zesty, herby flavor, and it’s quick and easy to mix up. Alex and I have taken to adding a little drizzle into our DIY quesadillas and it’s pretty darn heavenly. Here’s how to make it!

This cilantro lime crema recipe has a short list of ingredients. It’s quick and easy, so you can whip it up when a craving strikes! Here’s what’s in this tasty sauce:

Mexican crema is a thickened cream often used in traditional Mexican cuisine to dollop over soups, tacos, burritos, enchiladas, and anything that needs a touch of richness. It’s creamy and slightly tangy, and falls somewhere between American sour cream and French crème fraîche. It’s richer than sour cream because it has a higher fat content.

Traditionally, a cilantro lime crema should be made with Mexican crema. You can find Mexican crema at the grocery store, but it’s sometimes hard to find. But guess what? You can make your own Mexican crema! It’s a fun kitchen DIY. Head to How to Make Mexican Crema.

Or, use sour cream!

A traditional cilantro lime crema would be made with Mexican crema. But if you don’t have it, never fear: sour cream is an easy substitute for Mexican crema! You can easily use sour cream and you won’t notice a significant difference.

The nice thing about this cilantro lime crema is that you can make it using various methods! You don’t need any special equipment and can easily blend it by hand. Or, use a food processor or blender to make quick work of it and a more beautifully green sauce. Here’s a breakdown:

Looking for a vegan cilantro lime crema? Look no further than our Cilantro Sauce! This creamy sauce is completely plant-based: it uses cashews to make a creamy base. It’s just as good as this traditional version, so make sure to give it a try if you’re looking for dairy-free options.

Want other flavors? Try this Lime Crema: you can whip it up in just 5 minutes, no blender required. Or, try our Easy Avocado Crema with avocado or spicy Chipotle Crema.

Once you’ve got a batch, the possibilities are endless! Here are our top ways to drizzle or dollop cilantro lime crema:

This cilantro lime crema recipe is…

Vegetarian and gluten-free. For vegan, plant-based, and dairy-free, go to Creamy Cilantro Sauce.

Cilantro recipes are some of the most delicious (we think!). Here are some more recipes starring this tasty herb: