This lime crema recipe is quick and zesty, with a big citrus flavor! Use it for dolloping tacos, bowl meals, and more.

Here’s a quick and simple sauce that adds a zing to everything it touches: Lime Crema! This Mexican-inspired sauce requires just 4 ingredients and a few minutes to whip up: no blender needed. That’s right: just throw it together with a bowl and a spoon! This is a new favorite way to garnish tacos, tamales, quesadillas, and burrito bowls because it’s so simple and full of flavor. In fact, I may have used the word “obsessed” to describe my relationship with this one. Here’s how it’s done!

Ingredients in this lime crema recipe

Crema is a thickened cream often used in traditional Mexican cuisine to dollop over soups, tacos, burritos, enchiladas. Traditionally, a lime crema would be made with actual Mexican crema. But this type of sauce can also be made with sour cream, yogurt, or mayonnaise. This recipe takes inspiration from the rich cultural food tradition of this Mexican sauce, providing variations using three types of dairy.

To be honest, we love this lime crema recipe even more than cilantro lime crema because you don’t need a blender for the cilantro! It’s slicker and cleaner. Here’s what you’ll need:

How to find (or make) Mexican crema

Mexican crema is a thickened cream often used in traditional Mexican cuisine. Creamy and slightly tangy, it falls somewhere between American sour cream and French crème fraîche. It’s richer than sour cream because it has a higher fat content.

You can find Mexican crema at the grocery store: look near the sour cream and creme fraiche. But it’s sometimes hard to find, so you can also make your own Mexican crema! It’s a fun kitchen DIY that takes 48 hours to thicken. Go to How to Make Mexican Crema.

The easiest way to make this lime crema is with sour cream: it tastes rich and incredible! Another option is a bit lighter and healthier: you can use a combination of Greek yogurt and mayonnaise. The Greek yogurt lightens up the calories while the mayo adds richness in flavor. (This is the key behind our Caesar Dressing, Green Goddess Dressing and Ranch Dip.) For this recipe you can use:

This lime crema is a great back-pocket recipe because it’s so simple and requires only a handful of ingredients. When we make tacos, the sauce sometimes comes as an afterthought: and we need something quick and easy so we can sit down and eat our meal! That’s where this lime crema comes in. It’s great on:

Got a few limes around? Use them to make these tasty lime recipes: 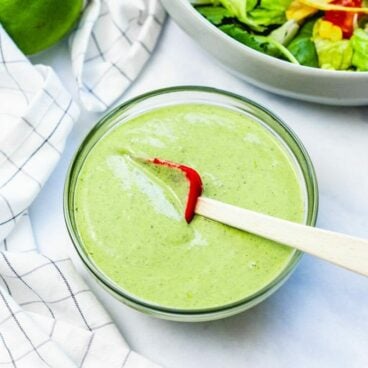 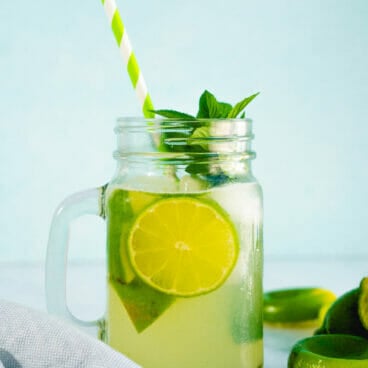 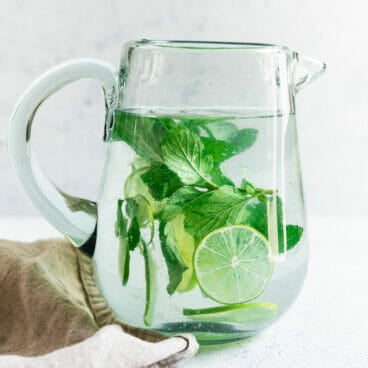 This lime crema recipe is…

This lime crema recipe is quick and zesty, with a big citrus flavor! Use it for dolloping tacos, bowl meals, and more.