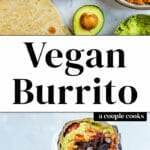 Welcome to…your new favorite healthy meal. Well, at least it’s ours! Something about all those tasty fillings snuggled cozily into a tortilla makes a burrito irresistible. Because Alex and I eat mostly plant based, we decided to try our hand at a vegan burrito. To say it was a raving success is an understatement! This burrito is packed with flavor from Spanish rice (aka Mexican rice), seasoned black beans, peppers and onions, and mashed avocado. Even better, step it up with a zingy vegan sauce. Ready to cook?

What’s in this vegan burrito: the base recipe

This vegan burrito is chock full of healthy veggies like black beans, bell peppers, onions, and avocado. Alex and I were careful not to go overboard on this one prep-wise. Sometimes meals like this one can take quite a while to prepare all the components. The base recipe has just enough going on flavor and texture-wise to be perfectly delicious. Then send it over the top with sauces or more fillings below. Here’s what’s in the base recipe:

Once you’ve got the base recipe, you can take this vegan burrito over the top with a sauce. For parties or when you have time, it’s fun to add even more flavor! (Piling on all those different components is part of what makes burritos from Mexican chains like Chipotle so tasty.) Here are all our vegan sauces fit for a burrito:

Use Spanish rice or this shortcut!

The Spanish Rice is what makes this vegan burrito, in our opinion! Though Spanish rice is actually not Spanish at all…it’s a Mexican dish! It’s sometimes called Mexican rice or arroz rojo (” red rice” in Spanish).Our Spanish rice is faster than most recipes: you’ll cook it with salsa to infuse lots of flavor. It’s so worth it and you can use the leftovers for days! It takes about 30 minutes total to make, and you can most of that time preparing the burrito filling.

Want a shortcut? Make a pot of white rice, then mix it with store-bought salsa to taste. If you’d want, stir in a little adobo sauce from a can of chipotle peppers to get even closer to the flavor of Spanish rice.

How to roll a burrito

Lastly…what’s the best way to roll a burrito? Honestly, Alex and I weren’t the greatest at this at first. It can still be difficult depending on the tortilla! We like to use flour tortillas because they’re the most pliable. You can use gluten-free tortillas if you wish: some brands can tend to break, depending on the ingredients. That’s where aluminum foil comes in handy! Here’s our method for how to roll a burrito:

This vegan burrito recipe is…

*You’ll have lots of leftovers, which you can use throughout the week or make into Spanish rice and beans by adding black, pinto, or kidney beans.

Here are some more of our top vegan recipes: