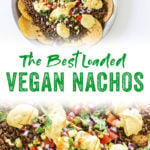 These loaded vegan nachos are the best! These plant based, healthy nachos are so flavorful, no one will miss the meat.

Hey, nacho lovers! Looking for a plant-based spin on the classic comfort food? Here at A Couple Cooks we’re huge fans of this Tex Mex favorite. There’s our sheet pan nachos (the best ever), or grilled nachos, made on the grill in a cast iron skillet. And our Greek nachos that use pita chips as a base. There’s even tater tot nachos, made with our homemade tater tots! But our new favorite? These Amazing Vegan Nachos! They are so full of flavor and the icing on the cake is this flavor-packed vegan nacho cheese. No one will miss the meat: in fact, we like them just as much!

How to make the best vegan nachos

Nachos is a pretty loose concept, so there’s no “perfect” way to make them. So for these healthy vegan nachos, we took this approach: load on fresh, plant-based toppings and homemade sauces made of wholesome ingredients. Making these loaded nachos is very simple once you have made up a few of the components! Here are all our secrets.

There are actually some chips that are just a few ingredients and not too bad on the processed food scale. For these vegan nachos, we suggest looking for organic corn chips that have only 3 ingredients: corn, oil, and salt! Look on the back of the package to determine whether your chips fit this description.

Another way to get around processed chips is to make your own! Try these homemade tortilla chips: they’re incredibly good (and even better freshly made and warm from the oven).

There are a few topping ideas for these vegan nachos, depending on your diet preferences and equipment! Here’s what to know:

This vegan nacho cheese recipe is so delicious and simple to make: and it tastes way better than the plastic store-bought nacho cheese! All you need is to blend together cashews, green chiles, and a few spices. Another option: try our Spicy Chipotle Sauce.

Other toppings you might want to try to step up these vegan nachos? Pickled Radishes or Pickled Jalapeños, which add a nice zing.

When to serve vegan nachos

These vegan nachos are perfect for parties or a gameday appetizer for watching football: or if you’re like us, they also work as a simple dinner! You don’t even need to tell people they’re healthy or vegan, if vegan is a negative buzzword for people.

Everyone in the family can enjoy these vegan nachos regardless of their diet preferences: we promise! Vegan doesn’t have to be lofty, unattainable, or not-as-good-as-the-regular. The experience of these nachos is like any other: super satisfying and delicious! Except that it leaves your body feeling good, instead of the typical gut bomb of salt and fat. We hope you love them as much as we do!

This vegan nachos recipe is…

These loaded vegan nachos are the best! These plant based, healthy nachos are so flavorful, no one will miss the meat.

*Note: The timing for this recipe assumes that the Lentils and Rice and Nacho Cheese are made in advance.

Here are some of our favorite vegan recipes!