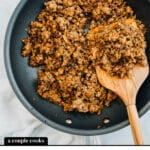 The secret to vegan taco meat that pleases everyone? This walnut taco meat is beyond delicious in tacos, salads, & more.

Here’s a new trick for plant-based eating that will rock your world. Because it did for us! Meet this Walnut Vegan Taco Meat! It might sound odd, but the combination of mushrooms, walnuts, and spices makes a mixture that’s very similar in texture and flavor to real meat. We’ve had a few testers try this and everyone agrees: it’s so delicious! Use it in tacos, taco salad, and even in chili. It’s a great homemade alternative to processed veggie crumbles! Here are all the secrets.

What to expect with walnut taco meat? Well, here’s the thing: it’s not exactly like meat. It doesn’t quite have the same chewy texture. But it’s very close! In fact, it’s the closest thing we’ve ever had. And that’s saying something, since we’ve been writing vegetarian and vegan recipes for 10 years! Here’s what you’ll need for this kitchen magic trick:

Why it works: the basic idea behind walnut taco meat

Here’s the main idea behind this vegan walnut taco meat. It might sound odd: until you try it for the first time! You’ll be sold, one bite in. (At least, we were.) Here are the main steps you’ll complete:

Use a food processor (or knife)

You’ll need one special tool for this vegan taco meat: a food processor! But you can also make it with a knife. Here are a few notes on the chopping:

Vegan taco meat is a great alternative to purchased crumbles

This vegan taco meat is a great alternative to store-bought veggie crumbles. In fact, some brands are essentially just as much a processed food as ground beef itself (though some brands these days are more natural). You can also store it just like store-bought! Keep reading…

The nice thing about this vegan taco meat: you can freeze it just like purchased veggie crumbles! This makes it perfect for throwing crumbles into soups, salads, and more. Here’s what to do if you make these crumbles in advance:

The uses for these crumbles are endless! In fact, they’re so good we can’t help but use them on everything! Don’t limit yourself to only recipes with the word “taco”. Here are some vegan recipes where walnut taco meat shines:

This vegan taco meat recipe is…

The secret to vegan taco meat that pleases everyone? This walnut taco meat is beyond delicious in tacos, salads, & more.

**It also works with 1 cup walnuts and same amount of mushrooms: reduce the kosher salt to ¼ teaspoon and then add more to taste.

*If you can’t find smoked paprika, you can substitute chili powder here.

Here are a few more key vegan recipes that work as substitutes in a whole food plant-based diet: