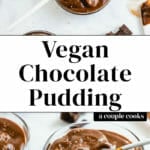 This vegan chocolate pudding is so rich and chocolaty, no one will know its dairy free! Cocoa powder and oat milk combine into a decadent dessert.

Bookmark this recipe stat. This vegan chocolate pudding is so creamy and rich, you’ll think it’s the real thing! The flavor is pure rich chocolate, and it gives you all those nostalgic Snack Pack-style vibes. (It did for us, at least.) The best part: there are no weird “tricks” to this dairy free chocolate pudding. Ever made pudding with avocado or tofu and while it’s good, deep down part of your brain is not quite convinced? This one tastes like the real thing — and it’s made with real ingredients, just like a traditional pudding.

Like we said: there are no crazy ingredients for this easy vegan chocolate pudding. No avocado aftertaste, or weird tofu tricks for a pudding like consistency. This one is pure real ingredients! Here’s what you’ll need:

Use your favorite non dairy milk (almond or oat milk)

You can use your favorite non-dairy milk in this recipe! Here are a few notes about the types of non dairy milk and what works the best in vegan pudding:

How to make vegan chocolate pudding: some tips

The method for making this vegan chocolate pudding is the same as a traditional chocolate pudding! You’ll whisk together cocoa powder, sugar, cornstarch, and milk until thickened, then remove from the heat and add chocolate. Here are some tips to keep in mind as you go about the process:

Troubleshooting: how to avoid lumpy pudding?

The biggest issue with making vegan chocolate pudding: the pudding can get lumpy! To prevent this, make sure to whisk all the dry ingredients well before starting the process: get out any clumps of cocoa powder and cornstarch. Then make sure to add the milk in gradually, whisking after each addition so that it becomes smooth. This is before you even apply the heat!

When you start heating the mixture, continue to stir often to prevent lumps. If you do all these things and end up with some minor lumps, it’s ok! It shouldn’t affect the overall flavor.

The trick with homemade vegan chocolate pudding is that it thickens fully in the refrigerator. It will thicken to pudding-like consistency after refrigerating for about 2 to 3 hours. Here’s what to know about this process:

This vegan chocolate pudding went over very well with our 3 year old! It’s an easy recipe you can make with kids. And it’s a great as a healthy dessert to serve to kids. We served it after a Friday night pizza party and it got rave reviews!

This vegan chocolate pudding recipe is…

This vegan chocolate pudding is so rich and chocolaty, no one will know its dairy free! Cocoa powder and oat milk combine into a decadent dessert.