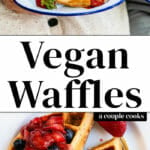 These vegan waffles are so light and fluffy, no one will guess they’re plant based! They’re easy to make with pantry ingredients.

Think plant based waffles are any sort of compromise? Think again. These vegan waffles are light, fluffy, and exactly what you want in a waffle. In fact, we should really just call them WAFFLES that just so happen to be plant based. Even better, the ingredients are simple: flour, sugar, oil, oat or almond milk, and spices: things you’ll likely already have on hand in your pantry. You’ve got to try these: whether you eat plant-based or not. And this strawberry sauce takes them over the top. (It also just happens to be plant based…!)

The ingredients are so simple for these vegan waffles: you might already have them all on hand! Often vegan recipes like pancakes or banana bread call for a flax egg: it’s used to replace an egg as a binder. But for these waffles, we’ve conveniently engineered that out! No special ingredients: just normal pantry ingredients, here. This one’s a spin on our classic waffles that’s just as delicious. The ingredients you’ll need for vegan waffles are:

How to make vegan waffles: some tips!

Waffles are pretty straightforward: and same with vegan waffles! Here are a few tips:

Regular waffles vs Belgian waffles (& which is better?)

What’s the difference between standard and Belgian waffles? Here’s the breakdown:

You might have already guessed our preference here…Belgian waffles! Because they’re taller and fluffier, they look prettier and are more fun to eat. If you’re in the market for a waffle iron, here’s a Belgian waffle iron we recommend.

Once you’ve got those beautiful golden brown waffles…let’s move on to the toppings! Of course, they’re fabulous with just a bit of maple syrup. To make a filling breakfast, we like to top them with nut butter or fruit. Here are some waffle toppings we recommend:

Are you a waffle lover? Try making a double batch and then freezing your leftovers! There’s nothing better than opening the freezer for a quick breakfast. Here’s how to freeze waffles:

This vegan waffles recipe is…

These vegan waffles are so light and fluffy, no one will guess they’re plant based! They’re easy to make with pantry ingredients.