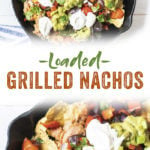 Wondering how to make nachos on a grill? These grillable loaded nachos take summer grilling to a new level!

These Loaded Grilled Nachos were created in partnership with Kroger. All opinions are our own.

Guess what? We made a cooking show for you! It’s called the Summer Barbecue Series and it stars Alex and me with our friend author Tessa from Handle the Heat. Alex, Tessa and I have been working hard to create six brand new summer recipes. These Grilled Loaded Nachos are the first up in our series and man, are they good. When Alex made them for me the first time, I was stunned at how flavorful they were. They’re a fun spin on our classic sheet pan nachos for summer, infused with an irresistible smoky flavor!

Watch: how to make nachos on a grill

The Summer Barbecue Series is a 6-episode cooking show we dreamed up with our friend Tessa. Tessa runs Handle the Heat baking blog and she adds a sprinkling of science to her approach. She’s got a fabulous YouTube channel and book. We met in Detroit, hit it off, and dreamed up a collab to get us in front of the camera. We were so excited to bring on Kroger as our partner and create 6 new summer barbecue recipes with ingredients you can find at their stores.

Grilled nachos are a perfect grilled dinner idea to wow a crowd for summer entertaining! Making nachos on the grill brings a smoky, charred flavor to the nachos and they look stunning in a cast iron skillet. They’re a fun summer recipe to share with guests on the patio. You can eat them as a main dish with a side salad, or as an appetizer for a summer happy hour.

Our grilled loaded nachos feature our best nacho toppings to make them out-of-this-world good. In this recipe, we featured two star ingredients from Kroger (and got everything else there too!): Mission tortilla chips and Private Selection salsa.

How to make nachos on a grill?

The basic concept of how to make nachos on a grill is to place the nachos in a cast iron skillet, cover it with foil, and grill it for a few minutes to melt the cheese. But Alex and I wanted to amp up the grilled flavor in these loaded nachos. So in this recipe, we’ve used the grill not once but twice: once to grill the veggie toppings, and then again to melt the cheese.

Grilling the vegetables for the nacho toppings amps up the smoky, grilled flavor so it’s there in every bite! If you don’t have a cast iron skillet, it’s not necessary for this recipe. You can use any grill proof pan for the recipe, including an aluminum sheet pan.

What are the best loaded nachos toppings?

To us, these are the best nacho toppings: but what are we missing? What are your favorite nacho toppings? Tell us in the comments below.

This loaded nachos recipe is…

Vegetarian and gluten free. For vegan, plant based, and dairy free, use Vegan Sour Cream and omit the cheese.

Wondering how to make nachos on a grill? These Loaded Grilled Nachos take summer grilling to a new level with the best vegetarian nacho toppings!

If you don’t have a grill, you can make these loaded nachos under the broiler as well. The timing and preparation will be the exact same.

Outside of these loaded grilled nachos, here are other summer barbecue recipes: