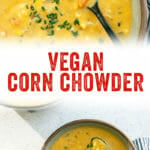 You’ll never believe this creamy soup is vegan: it has the perfect velvety texture and is full of flavor. Here’s how to make our best vegan corn chowder!

“WHOA.” That was my sister, who had just taken a bite of this vegan corn chowder. She said the same thing again when Alex and I mentioned it was vegan. Yes, this corn chowder has just set a new bar for vegan soup recipes. It’s so seriously creamy, with a savory undertone that seems undeniably meaty. Contrast that with the sweetness of the corn and, well, it’s pretty darn perfect. It’s similar to the corn and potato chowder in our cookbook, Pretty Simple Cooking: but this one is all about highlighting beautiful summer sweet corn. Keep reading for this tasty plant based dinner recipe.

How to make vegan corn chowder

How to make a vegan corn chowder, when most recipes have milk or cream? And most recipes aren’t even a vegetarian corn chowder: they also have bacon! It’s certainly a challenge to make up for all those textures and flavors, so we had to pull out our plant based tricks for this one.

To keep this chowder dairy free, it has to use something other than milk or cream to bring body and creaminess. Here are our secrets:

How to make a vegetarian corn chowder taste savory?

Simply making this corn chowder creamy is just one element of the puzzle. Often corn chowder is cooked with bacon, which adds an intensely savory element to the soup. But how to make a both vegan and vegetarian corn chowder that has a strong enough flavor to stand up to the bacon expectation? Here are our secrets:

Alex and I love sweet corn recipes. However, every time I see a recipe that calls for cutting corn off the cob, I wince a little imagining the spray of flying yellow specks all over our kitchen. Cutting corn off of the cob can be a little messy, and this vegan corn chowder calls for 6 ears of corn! Here are a few ways we like to cut corn without making a mess:

This vegan corn chowder recipe is…

You’ll never believe this creamy soup is vegan: it has the perfect velvety texture and is full of flavor. Here’s how to make our best vegan corn chowder!

Outside of this vegan corn chowder, we have lots of recipes using fresh corn! Here are a few of our favorite vegetarian corn recipes: