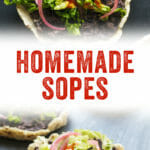 Sopes are a traditional Mexican recipe that are even easier to make than homemade tortillas! Fill them with black beans or meat for a tasty dinner recipe.

After bringing our son Larson home, we’ve become connected to new people all over the globe. Many are related to adoption from all sides: birth mamas, adopted children, adoptive families. Others have reached out knowing Larson has Mexican heritage. One of these generous souls was Alejandra of the vegan recipe blog Brown Sugar & Vanilla. She’s from Mexico, now living in Houston, and is incredibly lovely and kind. We chatted about Spanish kids books and authentic Mexican recipes. One of the recipes she mentioned was sopes.

Sopes are a sort of thick tortilla with upturned edges, topped with meat, beans, and sauces. While Alex and I eat Mexican recipes often, neither of us had ever eaten a sope. Alejandra introduced us to sopes and created this special homemade sopes recipe in honor of Larson and his adoption story. So we are thrilled today to be sharing Alejandra’s method for making authentic homemade Mexican sopes.

Though they sound exotic, they’re actually quite simple to make at home. I expected them to be a little fussy, like making homemade tortillas. But unlike tortillas, which can be difficult to press thin enough, sopes are thicker and easier to press. They’re simple to cook on a hot griddle; the only part that requires a bit of finesse is turning up the edges after cooking.

How to make Mexican sopes

Here’s the basic concept for how to make homemade sopes!

Step 1: Mix up the dough, then roll it into balls.

Mix together a simple dough made mostly of masa harina, then form it into 10 dough balls.

Step 2: Flatten them into thin disks.

Cut a large plastic bag in half and place the dough ball on top of one piece, then top it with the other. Using a pie plate, flatten each dough ball into a thin disk. No need for a tortilla press here!

Step 3: Cook the sopes on a griddle.

Cook each disk on a very hot griddle for a few minutes until cooked through.

Step 4: Crimp up the edges with your fingers.

While the sope is still warm, crimp up the edges using your fingers.

How to serve sopes

And that’s it! Once the sopes are cooked, you can fill them with anything you might use for a taco. Here, we’ve spread them with a thin layer of our easy refried black beans, then sprinkled with bright pink pickled onions and a bit of crunchy romaine. For a special treat, we added a dollop of this vegan chipotle cashew cream. If you think ahead and have some on hand in the refrigerator, it’s perfect for topping Mexican recipes of all kinds (so is this Mexican crema, by the way!). Or, you can go all Jackson Pollock with sour cream and hot sauce.

These homemade sopes make for simple, healthy meals. We made ours as a weeknight dinner (I’ll admit, we can be fairly ambitious on weeknights), but a dinner of sopes would be fabulous for weekend guests. Serve them with a side salad and some chips and salsa fresca as a unique alternative to tacos. They’re a bit outside the norm, but we’re convinced sopes should be a thing. And Larson will grow up knowing—and loving—them!

Because of its focus on fresh vegetables and zesty spices, Mexican-style recipes are easy to make vegetarian and vegan. Here are some of our top vegetarian Mexican recipes:

This homemade sopes recipe is…

Sopes are a traditional Mexican recipe that are even easier to make than homemade tortillas! Fill them with black beans or meat for a tasty dinner recipe.