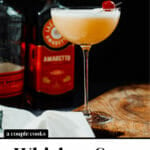 Here’s how to make a whiskey sour with egg white! The frothy foam topping is the cherry on top of this classic cocktail recipe.

When it comes to classic cocktails, there’s nothing quite like the whiskey sour. It’s sweet tart, with just enough pucker from the lemon balanced with simple syrup and a spicy bourbon finish. To take it to over the top status, in our opinion, you’ve gotta have that retro foam topping. Here’s how to make a Whiskey Sour Recipe with Egg White! This classic way to top drinks is perfectly safe and has been a tradition for hundreds of years. Your whiskey sour just got better.

Why add egg white to cocktails?

Egg whites in cocktails is an age old cocktail tradition. Bartenders have been adding egg whites to cocktails since the 1860’s. There are many classic egg white cocktails, from the Gin Fizz to the Pisco Sour. Why? Two things; an egg white adds:

Is it safe to drink egg white cocktails?

Before we start: if you’re worried about the safety of raw egg whites in cocktails, don’t worry! The risk of salmonella is very low. In fact: melons, salad, and peanuts, have more of a threat for salmonella than eggs! Here’s how to safely store and use eggs to minimize risk (via Food & Wine).

Ingredients in a whiskey sour with egg white

The whiskey sour is an iconic drink that goes back centuries. The earliest mention of the drink was in the 1870’s! It’s on the list of International Bartender Association’s IBA official cocktails, meaning it has an official definition. The IBA definition of a whiskey sour actually doesn’t include egg white, but it’s a well known addition to sour cocktails. (For example, the IBA definition of another famous sour, the pisco sour, includes egg white.)

The trick to the egg white foam: dry shake!

How does an egg white turn into foam? It’s a technique called a dry shake. Here’s what to know:

Is there a vegan egg white substitute in cocktails? Yes: aquafaba! Aquafaba is the liquid that’s inside a can of chickpeas. Because it’s so starchy, it works as a binder similar to an egg. Two tablespoons of aquafaba are equal to 1 egg white, so use that in this recipe as an egg white substitute. It makes for the same type of foam!

Best whiskey for a whiskey sour

What type of whiskey to use for a whiskey sour? You can use any type. Here’s a little breakdown on what we like best:

Ready to make it? Scroll down to the recipe below, and let us know how it goes in the comments!

So many other sour cocktails use the technique of an egg white foam topping! If you’re a sour fan like we are, here are a few more egg white cocktails to try:

When to serve a whiskey sour with egg white

The whiskey sour with egg white is a classy cocktail that works for anytime: especially to impress guests! It’s great for sipping as a:

Here’s how to make a whiskey sour with egg white! The frothy foam topping is the cherry on top of this classic cocktail recipe.