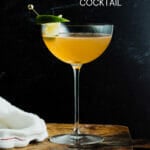 The Pegu Club cocktail is a classic 1920’s gin cocktail that’s like none other! It’s boozy and sophisticated, with a citrusy herbal finish.

After trying 300+ homemade cocktails, it’s not often to find one that surprises us. But this one was not what we expected. Meet the Pegu Club cocktail! It’s a classic 1920’s drink invented at, as the name suggests, the Pegu Club. This boozy drink is sophisticated and refreshing, with a citrus and herbal finish. It’s surprisingly balanced but not sweet at all (though it might look like a sour cocktail). Here’s how to make this intriguing classic…that we think deserves a revival.

What’s in the Pegu Club cocktail?

The Pegu Club is a gin cocktail invented in the 1920’s at the Pegu Club in Yangon, Myanmar (Rangoon, Burma at the time). The first mention of the Pegu Club appeared in a 1923 cocktail book by Harry McElhone, bartender of the iconic Harry’s New York Bar in Paris. (He’s taken credit for famous cocktails like the Sidecar, Between the Sheets and White Lady.) It was very well-known around the world at the time, though it’s faded in popularity today.

Unlike many cocktails of the day, the Pegu Club doesn’t balance sour with sweet simple syrup. Instead gin and orange liqueur are front and center! It makes for an intriguing, sophisticated drink. Here’s what you need for a Pegu Club:

Use two types of bitters

The Pegu Club cocktail calls for not one, but two types of bitters! Cocktail bitters are alcohol that’s infused with herbs, fruit, spices, leaves and other botanicals. They have a bitter, herbal flavor and are used to add nuance and intrigue to cocktails. The most famous cocktail recipe to use bitters is the Old Fashioned, but there are lots of other greats like the Manhattan and Sazerac.

The most popular types of bitters are Angostura bitters, Orange bitters, and Peychauds bitters. If you don’t have orange bitters (they’re less popular), you can absolutely make the cocktail with only Angostura bitters. The difference is very subtle! Of course if you’re a cocktail connoisseur, you’ll enjoy the opportunity to use dashes from two separate bottles.

How to make a Pegu Club cocktail: shake and strain!

The Pegu Club cocktail is easy to make, once you’ve compiled the essential ingredients! All you’ll need is a cocktail shaker.

We love 1920’s cocktails: in fact, we’ve made a list of our Top 1920s Cocktails to Try Today. Here are a few favorites that are in the same vein as the Pegu Club from this list of heavy hitters:

When to serve a Pegu Club

The Pegu Club is a classy cocktail that works for anytime! It’s great for sipping as a:

The Pegu Club cocktail is a classic 1920’s gin cocktail that’s like none other! It’s boozy and sophisticated, with a citrusy herbal finish.