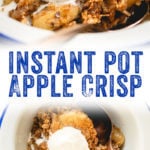 This Instant Pot apple crisp made with organic granola is quick and delicious! It’s a cozy vegan dessert recipe that cooks in minutes in a pressure cooker.

This post was created in partnership with One Degree Organic Foods. All opinions are our own.

Growing up in Minnesota, my family had an apple tree in the backyard that had the best crisp tart apples. Every year we’d pick them to make them into our “famous” apple butter to give to neighbors and friends. And of course, apple crisp! This fall Alex and I decided to create a healthy spin on apple crisp, for nostalgia sake. And because we’re obsessed with our Instant Pot…why not try it in a pressure cooker? This Instant Pot apple crisp turned out incredible and cooks in just 2 minutes, featuring organic granola for the topping.

This Instant Pot apple crisp recipe is quick and easy, and lets the apple flavor to really shine. And here, the pressure cooker isn’t the only time saver. The topping is made with granola! Using granola brings in some seasoning and sweetness. Of course, you’ll want to use a top of the line granola: organic if possible!

Now, this Instant Pot apple crisp is a little different: you’ll garnish the crisp after it’s cooked! This adds a beautiful freshness. When you scoop it into bowls, top with little lemon zest and additional cinnamon for a boost of fresh flavor. Topped with vanilla ice cream or whipped cream, it’s one of our favorite apple recipes.

What is sprouted granola?

The organic granola we used here is One Degree Organic Sprouted Oat Vanilla Chia Granola. If you know us well, you’ll know that we typically make our own granola. But it’s a different story with One Degree Organics! They’re a family business that thinks there should be only one degree of separation between you and the person you grew your food, like a farmer’s market. Every single product they put out has thoughtfully sourced, organic ingredients.

What’s sprouted oat granola? Sprouted grains are grains that are soaked in water. This makes them nutrient-rich, easier for your body to absorb, and easier to digest. One Degree’s sprouted oat granola is made with organic soaked oats, vitamin-rich seeds and grains, and warm spices such as cinnamon, cacao, and vanilla.

Every ingredient in One Degree’s granola can be traced by scanning the QR code on the package or entering the product code on onedegreeorganics.com. For this granola, type in “9HNCH6” and you can see all the farmers of the ingredients!

This Instant Pot apple crisp is quick and simple! The basic steps are that you’ll combine the filling ingredients in the bowl, then top with granola mixed with brown sugar and coconut oil. Then you’ll Pressure Cook on high for 2 minutes and do a quick release. Then you’ll remove the lid and let the crisp sit for 5 minutes to thicken up. That’s it!

A few important notes about this Instant Pot apple crisp before you start:

What people are saying about this apple crisp

A few recipe testers helped us to tweak this Instant Pot apple crisp to perfection! Here’s what people are saying about this pressure cooker apple crisp:

Where to buy sprouted granola

Find One Degree Organics in a store near you!

This Instant Pot apple crisp made with organic granola is quick and delicious! It’s a cozy vegan dessert recipe that cooks in minutes in a pressure cooker. In this crisp, the oats come out intentionally chewy.

Important note: If you use your Instant Pot / pressure cooker to cook strong savory items, the sealing ring on the inside of the lid can sometimes pick up flavor. You may want to check the plastic seal on the lid and smell it before you make a dessert. If it has an odor, soak it in vinegar for a few hours. Typically this shouldn’t be a problem, but we actually ran across it in our first test of this recipe. We have since purchased 2 Instant Pot sealing rings and use one for savory recipes and one for sweet recipes.

Outside of this Instant Pot apple crisp with granola, here are some of our favorite vegan dessert recipes: