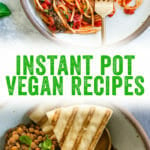 Looking for a vegan Instant Pot recipe? Here are our top recipes that are totally plant based and seriously tasty.

Looking for vegan Instant Pot recipes? Alex and I were Instant Pot skeptics for the longest time. We figured it was just for cooking meat. Turns out, pressure cookers are fantastic tools for cooking anything from sweet potatoes to soups. They can cook dry beans from scratch, or make pasta in minutes. Now: we’ll be the first to admit the Instant Pot still requires time and effort to plan meals and cook. But, it’s a pretty fantastic tool that we’ve come to love. Here are our favorite vegan Instant Pot recipes, and an incredibly tasty Instant Pot spaghetti recipe that you can whip up in a flash. Ready to get started? 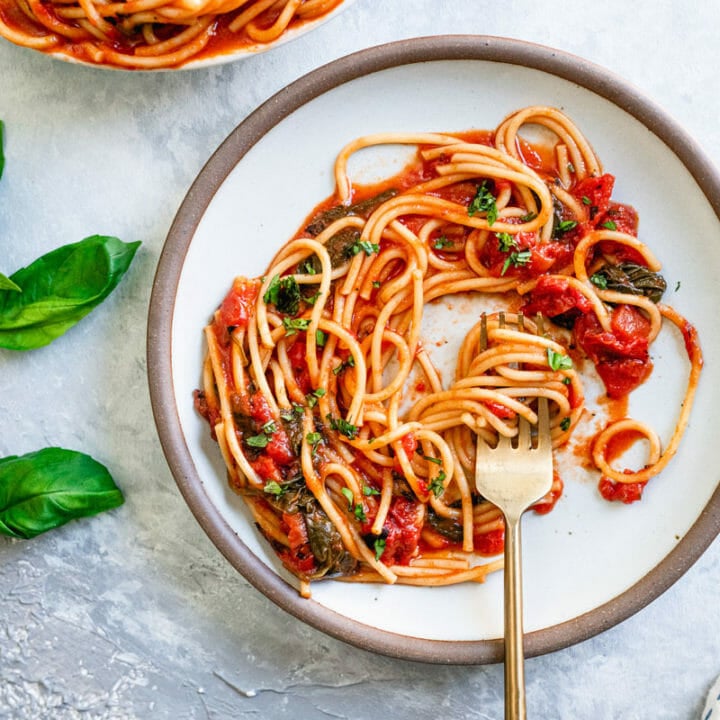 Looking for a fast and easy vegan Instant Pot recipe, where all you have to do is “set it and forget it”? This Instant Pot spaghetti recipe is for busy weeknights, and times when you just don’t want to have to think about dinner. And the flavor? Take it from one of our readers, who said: “Oh my, I scraped the bowl clean on this one! The flavor was awesome and it was so easy, it was exactly what I needed right now.” 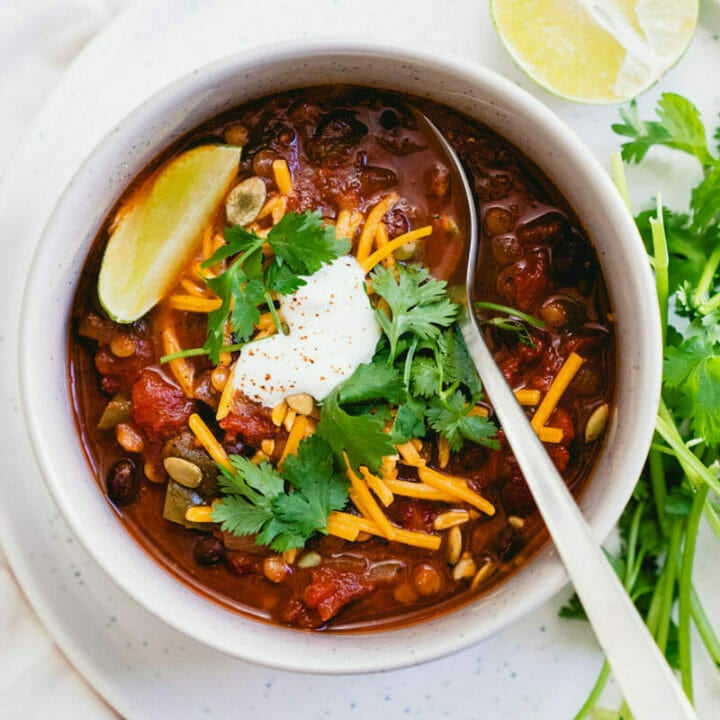 This one is really the best Instant Pot vegan chili recipe! It’s full of beans, veggies, and lentils to up the plant-based protein. A pressure cooker is a quick and easy way to make chili versus Crockpot chili, which takes hours and can turn out soggy. This Instant Pot chili is full of savory, hearty flavor. In fact…we might like it the best of all of our chili recipes! 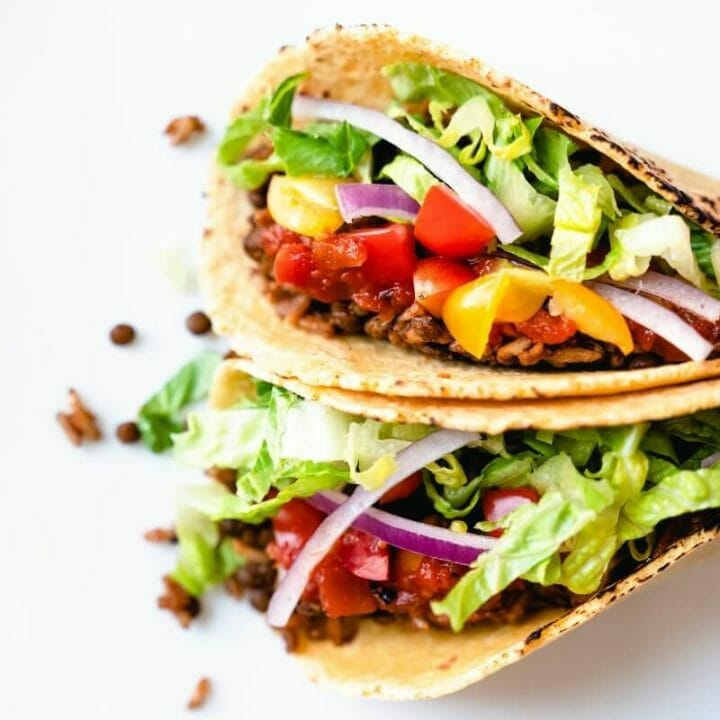 These vegan tacos feature our delicious Instant Pot smoky lentils and rice, spiced with smoked paprika, fennel, onion, and garlic. They cook up together into a meaty, savory mix. Top with a rainbow of veggies, salsa, and crunchy romaine, and you’re in business! 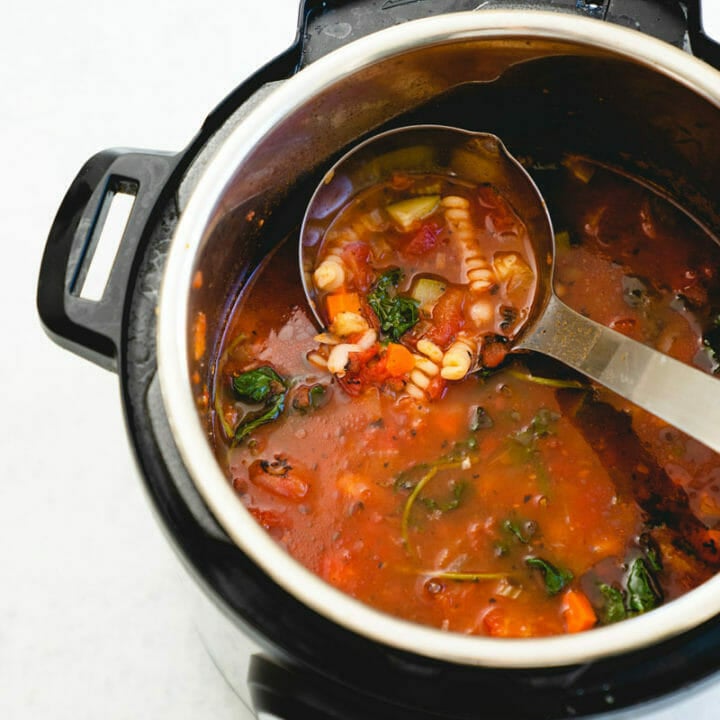 Here's a healthy vegan soup that's incredibly tasty: minestrone! This classic Italian stew is full of chunky vegetables, baby kale and pasta in a tomato-y broth. Serve garnished with fresh herbs, or take it up a notch with a dollop of vegan pesto. So good! 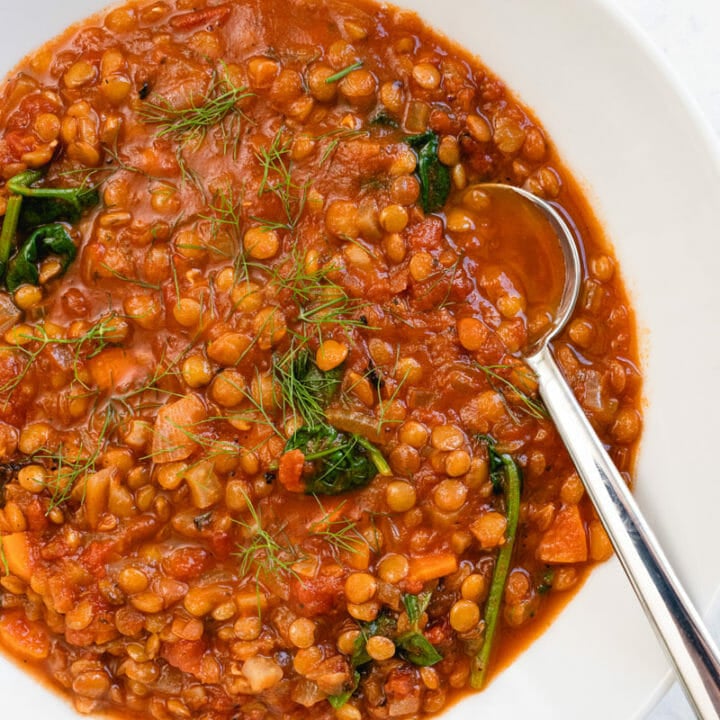 It's cozy, it's comforting, and it's made in the Instant Pot! This lentil soup stars protein-packed lentils, greens, and fire-roasted tomatoes to make a soup that the entire family will love. The star ingredient: fennel, which adds a smoky undertone. Said one recipe tester: "My husband said this could easily go into regular rotation at our house." Score! 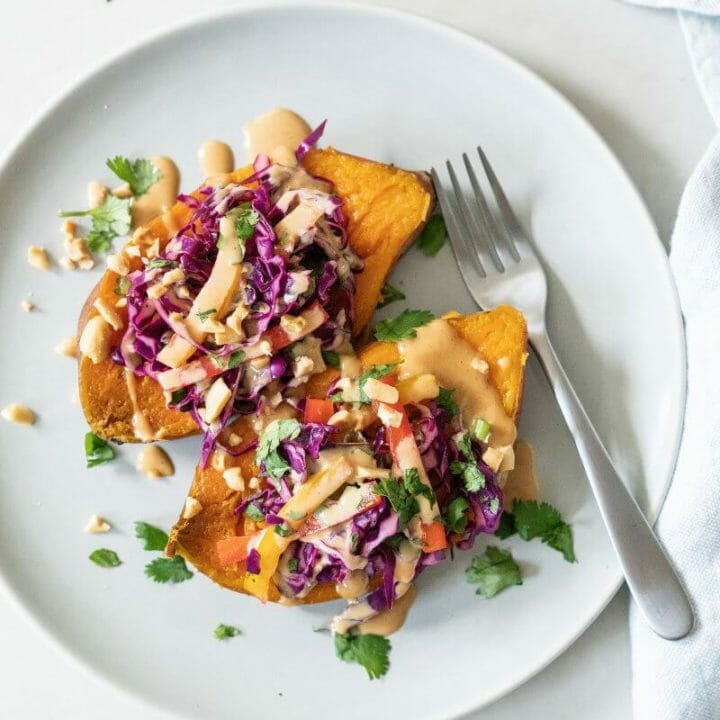 These Thai style baked sweet potatoes are one of our favorite vegan Instant Pot recipes, because of the big flavor in this simple concept. The Instant Pot makes for perfectly cooked, moist sweet potatoes. They're topped with a fresh, crunchy Thai-style pepper and cabbage slaw and a creamy peanut sauce. We’ve heard from many readers and followers that this one is a family favorite! 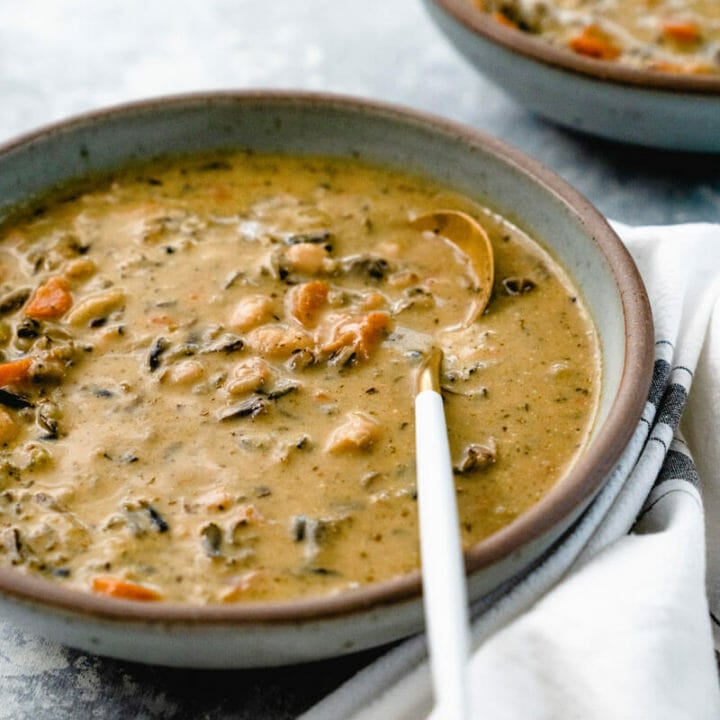 One of our fan favorite vegan Instant Pot recipes is this wild rice soup! It's creamy and comforting, with white beans, carrots, mushrooms and wild rice. The creaminess comes from cashews, blended with some of the soup, which creates a creamy body. It makes for a hearty vegan soup that all eaters can enjoy! 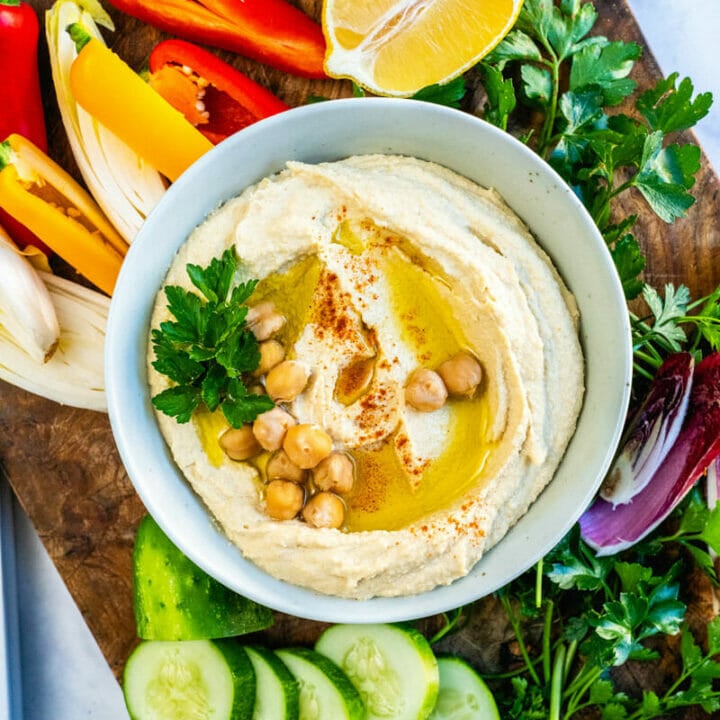 Here’s a fun trick you can whip up with your pressure cooker: Instant Pot hummus! Sure, it’s easy to buy store-bought hummus. But for the very best creamy chickpea puree: homemade hummus is where it’s at! It’s a great trick using your Instant Pot, and perfect if you whip up a big batch of chickpeas. 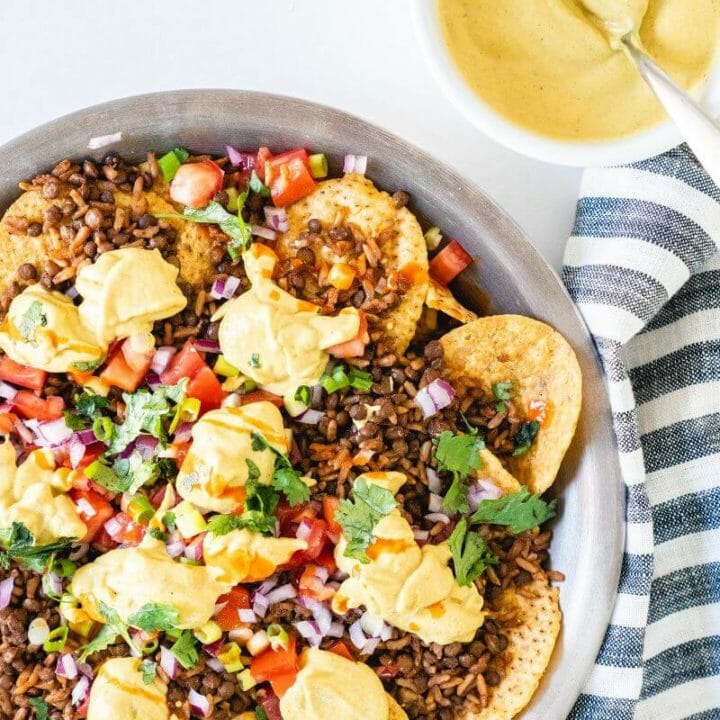 Lentils on nachos: why not? These loaded vegan nachos are the BEST because they’re piled high with smoky, meaty lentils and rice that stands in for taco meat. It's made in the Instant Pot and seriously tasty! Add to that crunchy veggies and our delightful vegan nacho cheese. To keep them healthy, look for organic corn chips with minimal ingredients (ideally corn, oil, and salt). 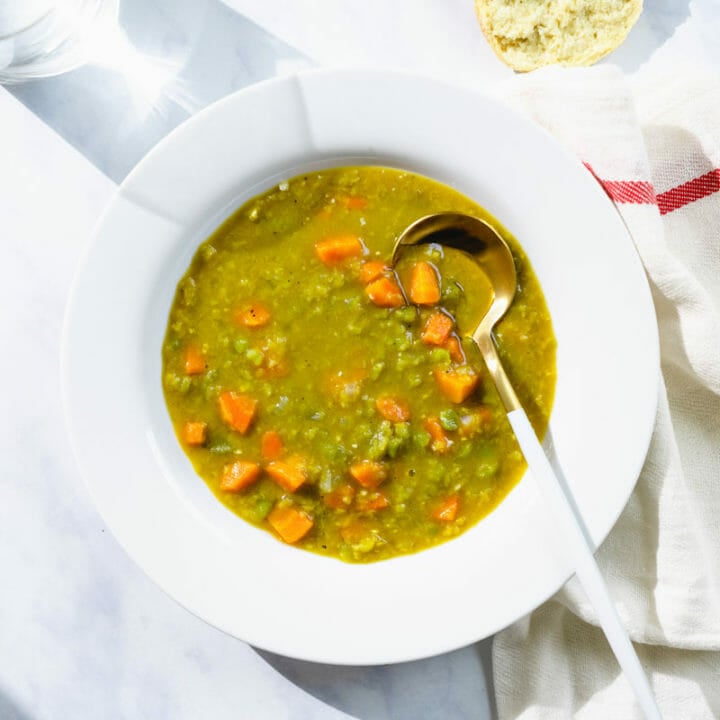 This vegan Instant Pot split pea soup is the ultimate meal: it’s filling, plant based, and easy to make in a pressure cooker. It’s a tasty, healthy dinner recipe! It's full of cozy, lightly smoky flavor. It’s a filling whole food plant based recipe (WFPB) because split peas have lots of plant-based protein! 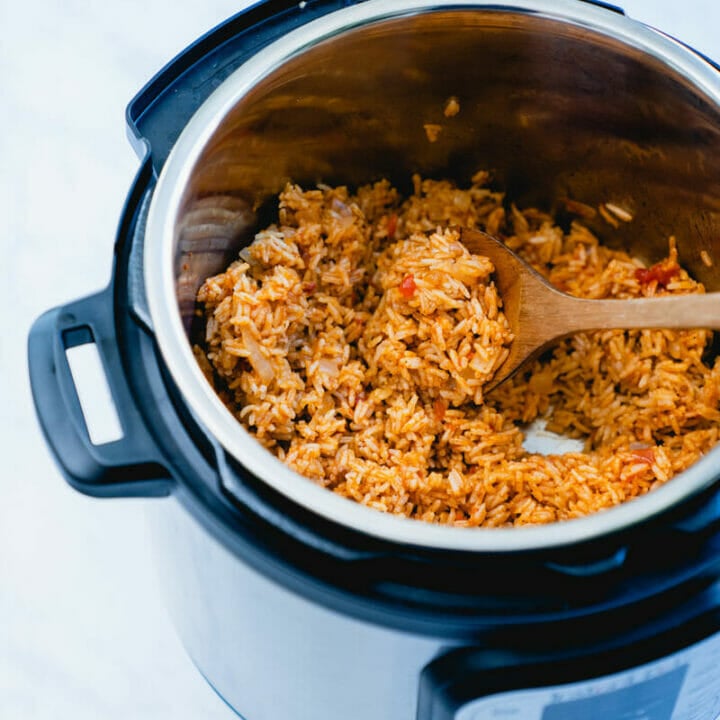 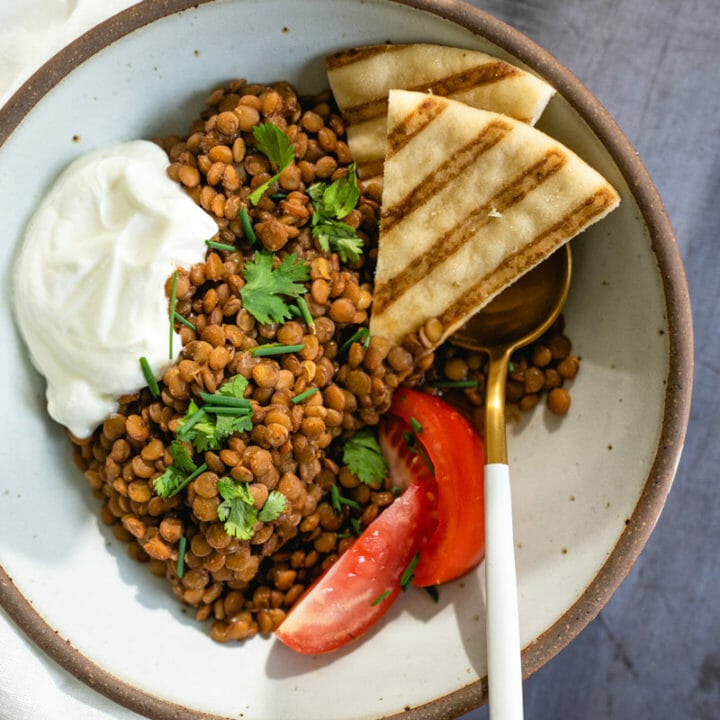 The lentils come out perfectly spiced and very moist! You’ll notice that the bowl of the pressure cooker comes out with a bit of broth left over: stir it in and the lentils will absorb the broth upon sitting. Throw them in a bowl with pita bread, a dollop of cashew cream, tomato wedges, and chopped cilantro for a seriously satisfying vegan Instant Pot recipe. 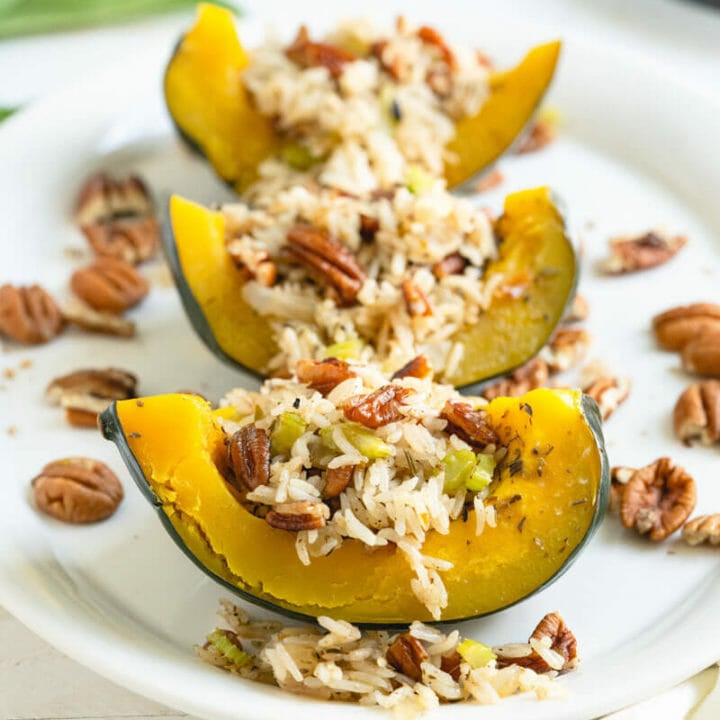 Tender acorn squash is stuffed with a savory, herb-laden pecan and rice stuffing that truly makes your kitchen smell like Thanksgiving while you make it. Did you know you can cook acorn squash in a pressure cooker? This vegan Instant Pot recipe uses the pressure cooker to cook both the rice and the squash, making it simple to whip up. 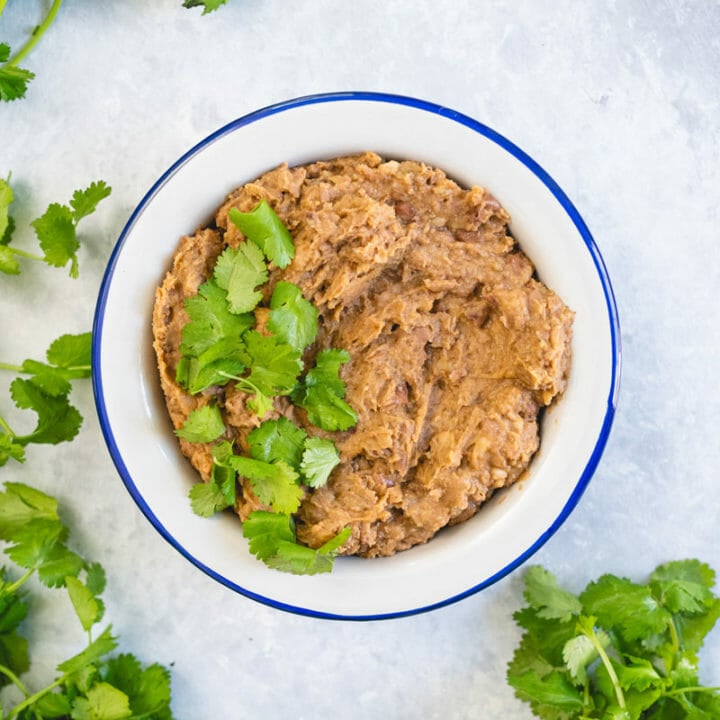 Homemade refried beans taste so seriously good, it’s worth making them when you have the time! We’ve also been trying to cook with more dried beans lately. The Instant Pot is actually perfect for homemade refried beans, because it skips the soaking time! Just throw the beans in with some seasoning, and in 1 hour they come out perfectly tender. Try them in our Refried Bean Dip with chips. 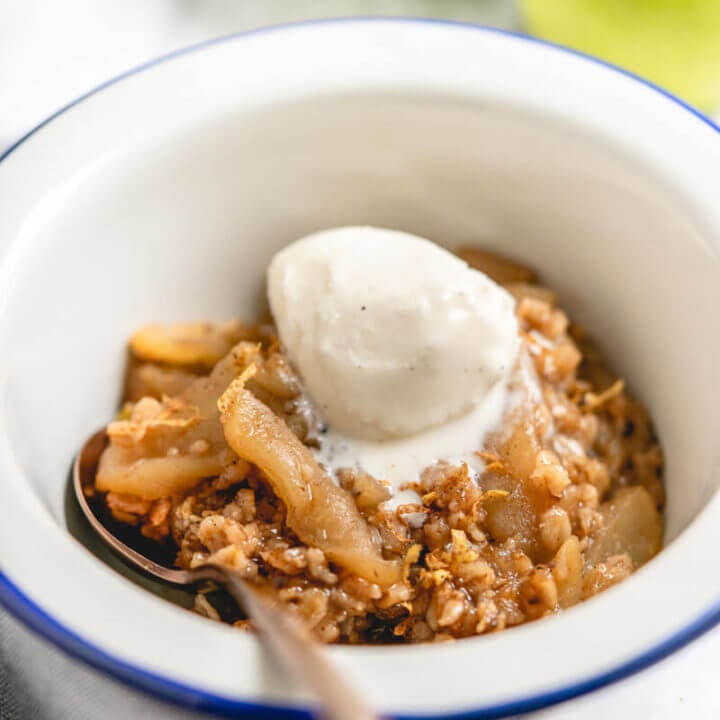 This vegan Instant Pot apple crisp recipe cooks in just 2 minutes! The crisp comes out with a chewy granola topping, brightened with a little lemon zest, and tangy tender apples. Take it from one of our recipe testers: “It was easy and quick and even though it was made in the Instant Pot rather than the oven it made my kitchen smell amazing. The apples came out perfectly tender!" 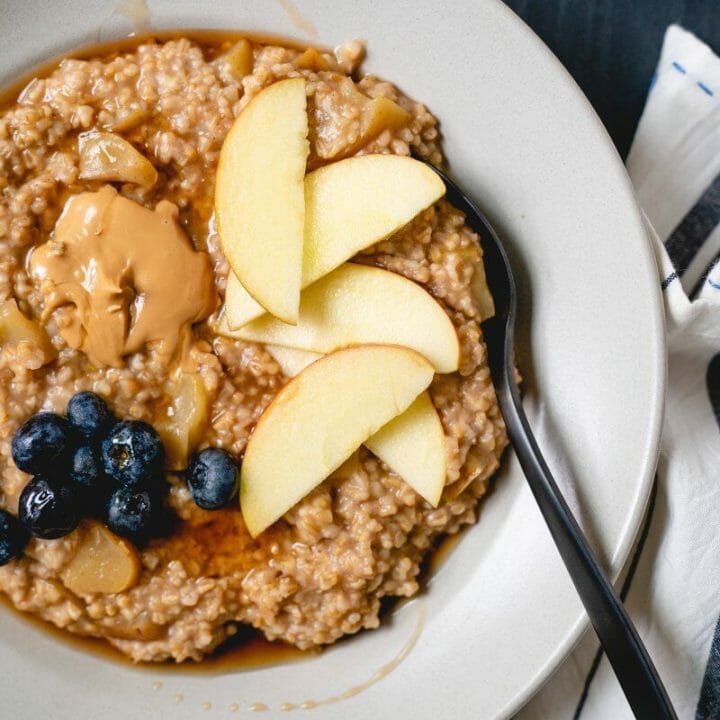 Why not use the Instant Pot...for breakfast? Here's a vegan Instant Pot recipe to start the day: a large batch of steel cut oats! Cook it up at the beginning of the week, and munch off of it all week long. You can top it as you like, but here we’ve used a drizzle of maple syrup, some fruit, and cashew butter! Creamy cashew butter adds additional protein to keep you full throughout the day. 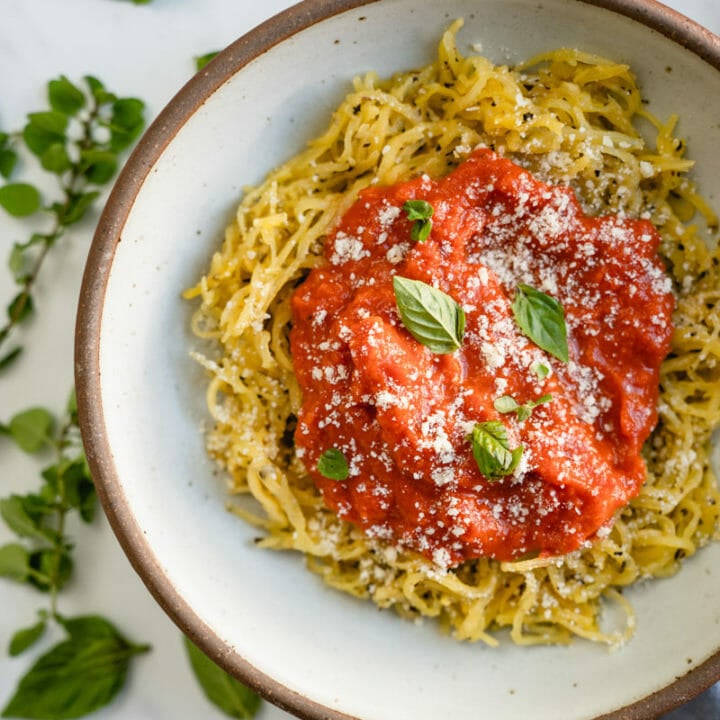 Gone are the days of waiting over 1 hour to roast spaghetti squash in the oven. This Instant Pot spaghetti squash method cuts the time in half! The cook time is only 8 minutes. With the 5 minutes to preheat and 10 minutes to let the squash drain afterwards, you’re still only looking at about 25 minutes total. Serve with your favorite marinara sauce! 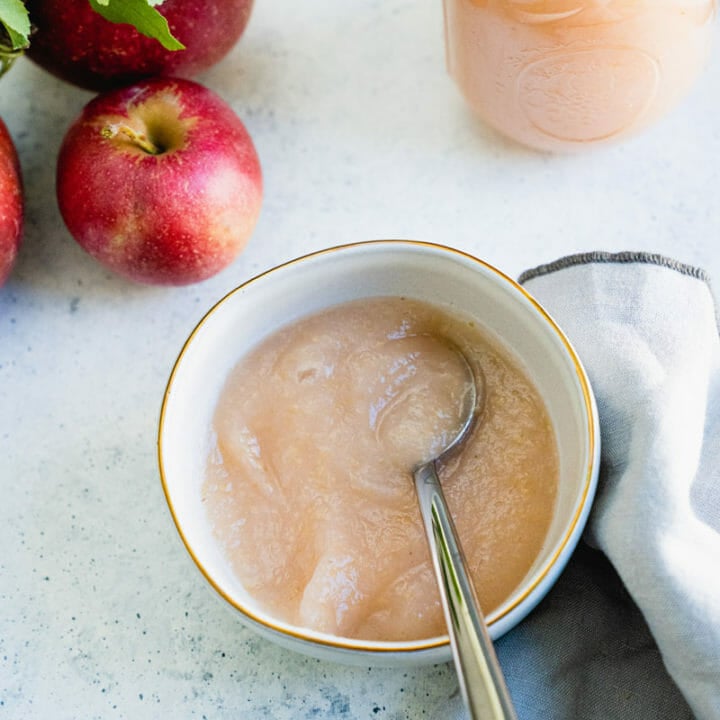 The Instant Pot is a fast way to make applesauce! This vegan applesauce recipe is tangy sweet and depending on the apples you use, you don't even need sweetener. All you need is a bunch of apples and a cinnamon stick. It comes together with no added sugars in under 30 minutes! 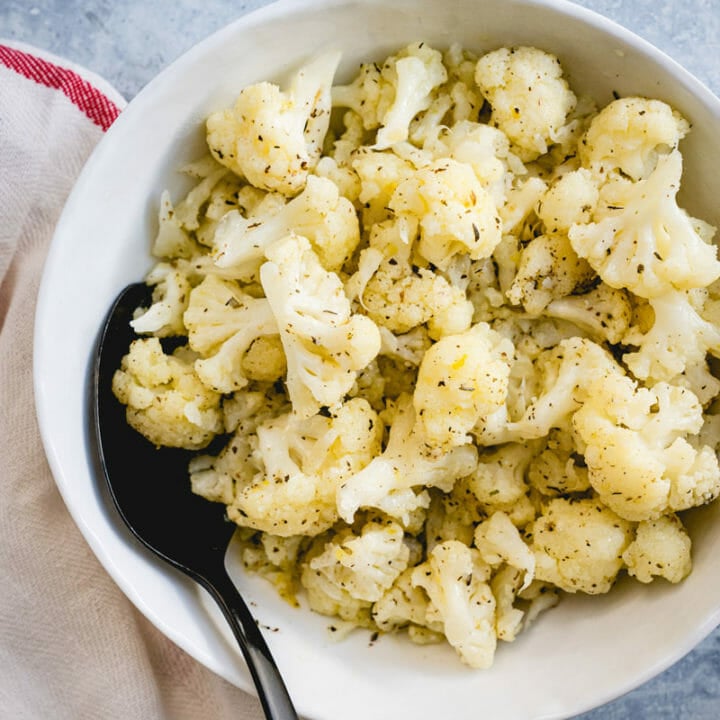 Here's another healthy Instant Pot recipe that makes a quick and easy side dish! This is the BEST way to eat cauliflower: mixed with lemon zest for brightness, Italian seasoning, and olive oil. It's got a Mediterranean flair and is so tasty, you won't be able to stop eating it! 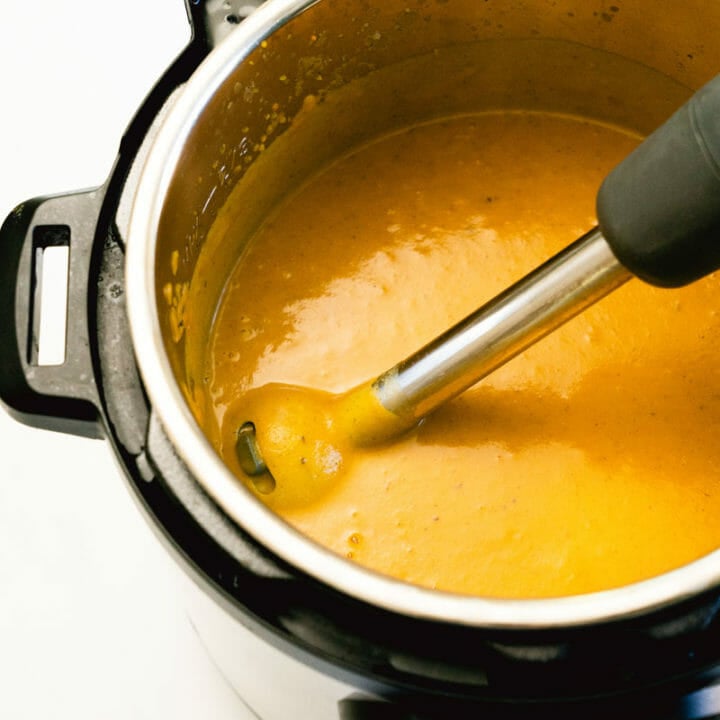 Ready for the quickest, coziest fall recipe? May we present: Instant Pot butternut squash soup! It's spiced with sage, with a hint of cinnamon and a smoky undertone. The squash and carrot give it an electric orange hue, and it's rounded out with potato and apple for sweetness. Really, it's pure gold in a bowl! It's a star in our comforting butternut squash recipes.

What’s an Instant Pot? Why cook with one?

First of all: what’s an Instant Pot? An Instant Pot is a programmable digital pressure cooker (Instant Pot is the brand name; Instapot is a slang variation). There are many other brands of electric pressure cookers. The concept is to cook foods at high pressure, which cuts down on cooking time — versus a crock pot or slow cooker, which is the opposite.

Now, we’ll be the first to admit: cooking with an Instant Pot is not something Alex and I ever expected to do! We’re wary of adding new gadgets to our kitchen–especially things that seem trendy like the Instant Pot! We were on the fence about it for years until a friend mentioned you can make Instant Pot vegetarian and vegan recipes: like cooking sweet potatoes, rice, quinoa, and dried beans.

Since we eat vegetarian or vegan recipes for the majority of our meals, we decided to give it a try. Still skeptical, we put the raw sweet potatoes into our pressure cooker…and they came out perfectly moist with little effort and faster than baking them in the oven! After the sweet potatoes, we were sold. We use our Instant Pot for cooking components and meals.

Here’s how to make this vegan Instant Pot spaghetti recipe:

And that’s it! The Instant Pot spaghetti comes out intensely flavorful, with sweet tomatoes and the herbaceous punch of basil. It’s seriously satisfying for eaters of all kinds, not just vegan! For example, one of our readers said this about the recipe:

“My husband is a total carnivore and he loved this; he said it’s a definite keeper! I expected him to comment that it needed meatballs or sausage, but he liked it just the way it was.” -Amanda

A note on fire roasted tomatoes

What Instant Pot do you use?

Alex and I use an Instant Pot brand Instant Pot, though there are lots of other great pressure cookers out there! The Instant Pot we use is the Instant Pot DUO60 6 Qt 7-in-1 Multi-Use Programmable Pressure Cooker.

There are some variations between pressure cooker brands, so we can’t speak to how other brands cook. For example, we’ve heard that the Instant Pot Mini is pretty different and does not work as well as the standard size. So, only use the Instant Pot Mini for these recipes at your own risk!