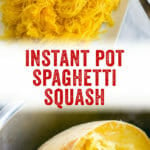 It’s fast and easy to cook this popular veggie in the pressure cooker. Instant Pot spaghetti squash takes half the time of baking and comes out perfectly al dente!

What people are saying about this recipe

All Instant Pots are variable, so we sent this pressure cooker spaghetti squash method to a few recipe testers before sharing it with you. It received rave reviews! Here’s what people are saying about this method of how to cook spaghetti squash:

How to cook Instant Pot spaghetti squash: a tutorial

What’s the best way to make Instant Pot spaghetti squash? It’s all about the way you cut it! Instead of lengthwise, you’ll cut the spaghetti squash in half width-wise. Keep reading for why, or jump to the recipe below.

Step 1: Cut the squash in half width-wise.

Step 2: Place the squash in the Instant Pot with 1 cup water.

Note: Because spaghetti squash are so large, you can only cook one at a time in a pressure cooker. If you’re looking to cook more than one squash, use the baked method. Go to Roasted Spaghetti Squash.

Step 3: Pressure cook on high for 8 minutes, then quick release.

Press the Pressure Cook button, making sure the “High Pressure” setting is selected, and set the time. It takes about 5 minutes for the pot to “preheat” and come up to pressure before it starts cooking. So this process will take about 15 minutes total. When it’s done, do a quick release and carefully release all the steam from the pressure cooker (see instructions in the recipe below).

Allow the cooked spaghetti squash to cool slightly. Then use a fork to scrape out the squash into “spaghetti” strands. The noodles should be long and have a slightly al dente texture. But we’re not done yet…

This step is important! Once you’ve got those beautiful long spaghetti squash noodles, this 10 minutes will save you a big headache. Why?

And that’s it! Perfectly cooked spaghetti squash in under 30 minutes using a pressure cooker! What do you think…life changing?

What’s the best Instant Pot to use?

All pressure cooker brands vary! Here’s the brand we use: the Instant Pot 6 Qt Programmable Pressure Cooker. We have been using it for about 2 years and love it! It’s just the right size and works great. We also have 2 Instant Pot sealing rings and use one for savory recipes and one for sweet recipes.

This recipe is customized for a 6 quart pressure cooker. We also can’t speak to other brands and types of pressure cookers. Use them at your own risk!

It’s fast and easy to cook this popular veggie in the pressure cooker. Instant Pot spaghetti squash takes half the time of baking and comes out perfectly al dente!