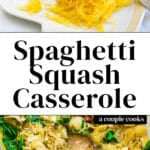 There are all sorts of spins on spaghetti squash casserole: this version uses Italian flavors to make a tangy, savory and cheesy version. Here are the major features:

Is it a main or a side dish?

One important question before we start: is this spaghetti squash casserole a main or a side? It’s the same question as mac and cheese, really. This casserole would make a stand-out side dish for entertaining. We could imagine it on the table at a pitch in or potluck with other hearty sides. It would be perfect for holiday meals like Thanksgiving or Christmas dinner, but it really works anytime that spaghetti squash is in season. It’s a great vegetarian and gluten free casserole option that works for various diets.

However: this casserole does take quite a while to prepare. The full prep time is almost an hour and a half. We’ll be honest: Alex and I don’t spend this much time on a side dish if we’re not entertaining. So, if we were making it just for us, we’d serve it as a main dish! Add a green salad and green beans and suddenly it’s a vegetarian main dish.

This casserole could also be a hearty savory brunch option! It would be perfect for brunch for holiday entertaining, or a baby shower or bridal shower brunch.

Can you speed up prep time on spaghetti squash casserole?

You can! There are some make ahead tips and short cuts we have in mind. Here’s what we’d suggest if you’re running low on time:

How to cut spaghetti squash

What involves the most technique in this spaghetti squash casserole? Cutting the squash! Our trick for getting the longest noddles is to cut the squash in half width-wise instead of lengthwise. The strands of the squash actually run around the width of the squash, not the length. It’s also easier to cut this way so the knife doesn’t slip. Here are the basic steps of how to cut a spaghetti squash (and see the video below!):

Ways to make it a meal!

This spaghetti squash casserole can be served as a main dish or a side dish. As we mentioned above, with the prep time (1 hour 30 minutes) we’d use it as a side for entertaining. To make it into a vegetarian dinner recipe, here are a few side dishes you could pair with it!

This spaghetti squash casserole recipe is…