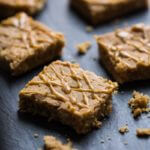 This post was created in partnership with Roxbury Mountain Maple. All opinions are our own.

Have you ever wished that you could visit your past self? What would you tell that person as “Future Me”? Recently I stumbled across a post I wrote a few years ago. Reading these lines today is like looking into a window in the past:

“Alex and I are waiting to be matched with a baby who will be our forever child. And we could get the call at literally any time. We wait with a boxed crib in an empty room, trying to keep ourselves from wondering, who will this little one be? Is it really true that he or she will have a name, a spirit, a humanity that will be etched indelibly on our hearts?”

How this has to do with vegan blondies, we’ll tell you in a minute. Keep reading.

Hello from the future

How I wish I could have called out to Past Me that everything would be okay. Yes, Alex and I would go through the incredible heartache of three failed adoptions. But over here as Future Me, I know that it was all worth it. All the pain and waiting and uncertainty was worth it the day we got to meet our baby boy.

So YES—there is a human living in that once empty nursery. And YES—he has a name and is overflowing with spirit. He’s Larson Ames, and he’s the spunkiest, happiest, busiest, sweetest boy. We’re constantly chasing after our little tornado—and wondering how there ever was a world where Larson Ames didn’t exist.

How the heck does this relate to vegan blondies? Well, the quote from that original post was for a recipe using maple syrup from Roxbury Mountain Maple — and here we are again with another maple syrup recipe! This one a few years later, trying to balance making recipes with a little one underfoot.

This vegan blondies recipe is a treat that works for eaters of all kinds: you don’t have to eat plant-based to enjoy this one! And, these vegan blondies are our very first truly crowd-sourced recipe! After offering 4 recipe choices in a poll over on Instagram, maple vegan blondies was the winner.

What’s in these vegan blondies?

In our recipe testing, we found brown sugar is essential to the blondie flavor and texture. So instead of using maple syrup in the blondie base, we’ve used it in the topping. We’ve replaced the traditional egg in blondies with applesauce, and butter with coconut oil. Chopped macadamia nuts give the interior some texture. And to bring in that maple flair, the blondies are topped with a drizzle of maple cream.

What is maple cream?

What is maple cream? Maple cream is pure maple syrup that’s boiled until it reduces into a creamy spread. You can use maple cream on anything, from drizzling on oatmeal to spreading on toast or dipping fruit. The maple cream we used is from Roxbury Mountain Maple, a New York-based family business. Roxbury is starting to become known for the stuff, and we find the organic creamy spread is very, very good.

In this recipe, we’ve used the Dark and Strong maple cream. It’s worth purchasing a jar, for this recipe or just for spreading on toast or dipping fruit. And, it’s great for gifts!

How to make vegan blondies

If you’ve made boxed brownies successfully in the past, you’ll be able to master these maple vegan blondies in no time. Instead of dumping a mix from a box, you measure out a handful of wet ingredients, then stir in some flour, baking powder, kosher salt, and chopped macadamia nuts.

Bake for 25 to 30 minutes, or until a toothpick inserted in the center comes out clean. Once the vegan blondies are out of the oven, drizzle melted maple cream over top and dig in!

About the company: Roxbury Mountain Maple

Listen: Ben from Roxbury was on our podcast, sharing about what it’s like to work for a family-run maple syrup business. Hear Ben on the A Couple Cooks Podcast: Syrupy Sweet.

Outside of this vegan blondies recipe, here are some of our favorite vegan desserts:

This vegan blondies recipe is…