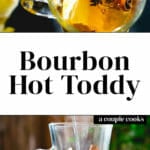 The bourbon hot toddy is a classic warming winter drink for cold weather! It’s quick and easy, made with bourbon, lemon and hot water.

Would you like a bourbon hot toddy? Alex asked me. The hot toddy in my mind looked a little like mulled wine or spiked cider, something full of warm spices and a pleasant aroma. But instead, he poured boiling water over a shot of bourbon, added lemon and spices, and handed it to me. It’s bourbon forward, he cautioned. I took one sip and wowza, it was not what I was expecting! But after I nursed the drink for a bit, I started to appreciate: here’s a warming drink that’s perfect for sipping on chilly evenings. Exactly why the hot toddy exists! Here’s how to make one for yourself.

The hot toddy has a long history (read about it here). In the early 19th century it was thought to be a cure for colds! It makes a lot of sense after you try it: this drink definitely puts a warmth in your chest and the back of your throat! Contrary to what I originally thought, the hot toddy is not a fancy winter cocktail. It’s a hot whiskey drink for around the fire in the evening.

The main elements of a hot toddy are whiskey, lemon, honey, and hot water or tea. Today, there are all sorts of variations on this theme, from cranberry to run to gin hot toddy recipes. In ours, we’ve used bourbon, and maple instead of honey since it’s our drink sweetener of choice. (Plus, sometimes the flavors lemon and honey together give us a medicinal vibe. Anyone else?)

How to make a hot toddy

There’s no simmering with mulling spices or ladling out of a punch bowl here. The hot toddy is humble and not much of a party drink. It’s made for quick and simple preparation at home! All you have to do is:

For this bourbon hot toddy recipe, we’ve added some fancy spices since we had some left over from our hot apple cider! None are necessary, but they add a nice visual element and subtle flavor:

Star anise is the most unique of these whole spices. It’s star-shaped and has a subtle black licorice flavor. It’s available at most grocery stores. If you can’t find it, you can also buy star anise online.

If you’re looking for hot drink recipes, we’ve got you covered! And we’ve got a few winter cocktails too.

This hot toddy recipe is…

The bourbon hot toddy is a classic warming winter drink for cold weather! It’s quick and easy, made with bourbon, lemon and hot water.