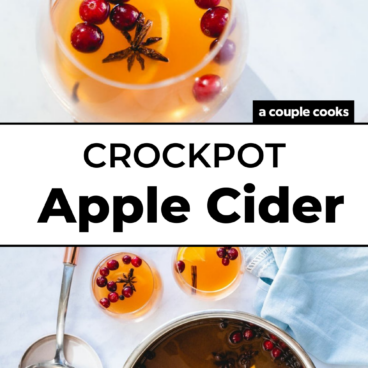 This Crockpot Apple Cider recipe is perfectly spiced with cinnamon and cloves! Everyone will love the wafting smell of this cozy drink.

Is there anything better than the aroma of cinnamon and cloves wafting through your kitchen? When we made this Crockpot apple cider, I asked Alex that exact question. (Then I went down a rabbit hole: is it a cultural or universal feeling? Do all humans feel the cozy I feel when they smell this?) Whatever the case, this mulled cider is the way to cultivate warmth and community in the bitter cold months. This recipe is easy to make and you can use either a Crockpot or an Instant Pot (pressure cooker)!

Use whole spices: for flavor and look!

This Crockpot apple cider recipe is made with real, whole spices that infuse a cozy flavor throughout the entire drink. Tasting the cider before the cooking process, it’s crisp and apple-y. Tasting afterwards, it’s warm and nuanced. These dry mulling spices give big flavor. You’ll use the whole versions of these spices, not ground. Here are the spices you need:

The star anise is the most unique of all these spices: and the most beautiful! It’s star-shaped and should be available at most grocery stores. You can also buy star anise online.

Did you know that an Instant Pot has a slow cooker setting? If you’ve got a pressure cooker, this recipe works in the Instant Pot, too. How to do it?

Should I toast the spices beforehand?

The first step in this Crockpot apple cider recipe is optional, but we highly recommend it! Toasting the spices prior to adding them to the cider helps to bring out the flavor even more. Because there’s no Saute function on a Crockpot, we suggest doing this in a skillet for 2 to 3 minutes, then popping the spices into the Crockpot . (Of course, you could use the Instant Pot Saute feature if you’d like if you’re using a pressure cooker…up to you!)

Um, yes! If you drink alcohol, adding a hint of rum to this Crockpot apple cider is 100% recommended. It adds an even warmer roundness to the recipe. The quantity we’ve specified below is very modest, so you’ll only have a warming hint of it in each sip.

If you’re serving a crowd of people, you might want to allow guests to add their own rum! The quantity below equates to only ½ tablespoon (1 ½ teaspoons) rum per glass: so basically a small swig!

The last step: a beautiful garnish

While Alex and I were testing this recipe, we tried a version where you cook the apple cider with fruit. After the cook time, the fruit had all sunk to the bottom and was no longer a beautiful vibrant color. It also didn’t add a lot to the flavor. So we decided to use it as a garnish. Here we’ve used sliced oranges and whole cranberries to make it look lovely for serving. This is great for entertaining! If you don’t want to use a garnish, you absolutely don’t have to: it tastes great either way!

This Crockpot apple cider recipe is…

This Crockpot Apple Cider recipe is perfectly spiced with cinnamon and cloves! Everyone will love the wafting smell of this cozy drink.

*Doubles easily, and fits into a standard Crockpot or Instant Pot.