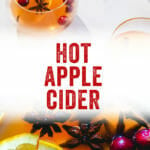 The epitome of cozy winter and fall drinks, hot apple cider is seriously easy to make at home! Here’s how to make spiced cider on the stove.

If there’s any winter or fall drink that makes the cold better, it’s hot apple cider. It makes your kitchen smell amazing. It has the power to gather people, cupping their hands around the warm mugs. The aroma can lift you out of the winter blues, and it makes any holiday party (Thanksgiving or Christmas) that much cozier. Hold it around a fire, and you’ll feel like you can move mountains. Here’s an easy recipe for how to make hot apple cider on the stovetop! It only takes 1 hour and it’s totally hands off.

Got a slow cooker or Instant Pot? Try our Slow Cooker Apple Cider.

Is hot apple cider as easy as warming apple cider on the stove? Yes and no. The secret to this recipe is in the spices. You’ll simmer the cider with whole spices to get an incredible warm flavor. Here’s what you’ll do:

What whole spices do I need?

This hot apple cider recipe is made with whole spices that infuse a cozy flavor. The flavor of cider before cooking is crisp and apple-y. But when you taste afterwards, it’s warm and nuanced. The mulling spices give big flavor. Use the whole versions of these spices, not ground. Here are the spices you need:

Star anise is the most unique of all these spices: you may not have cooked with it before. It’s star-shaped and should be available at most grocery stores. You can also buy star anise online.

To garnish or not? Stepping up this hot apple cider

Alex and I have tested making this hot apple cider by simmering it with fruit. Not only does the fruit not add a ton of flavor, but the color fades and it floats to the bottom. For this reason, garnish the cider at the end so that it keeps it’s color and floats on top! We used sliced orange, which also adds a subtle citrus note. Whole cranberries add no flavor at all, but just look pretty. Some other ideas for a garnish: rosemary sprigs, diced apple, or sliced lemon.

You absolutely don’t need to garnish this apple cider at all! Once you’re done warming the cider and spices for 1 hour, you can drink it immediately. However, adding the garnish takes it over the top and makes it look vibrant and beautiful!

Adding a hint of rum to this hot apple cider is seriously good! Alex and I recommend it because it adds a nice subtle warmth and round flavor to the drink. The quantity we’ve specified below is very modest, so you’ll only have a warming hint of it in each sip. Of if you’d like a stronger rum taste, go to Spiked Apple Cider.

Entertaining tip: If you’re serving a crowd of people, let guests to add their own rum! The quantity below equates to only 1/2 tablespoon (1 1/2 teaspoons) rum per glass: so all you need is a small swig!

This hot cider recipe is…

The epitome of cozy winter and fall drinks, hot apple cider is seriously easy to make at home! Here’s how to make spiced cider on the stove.