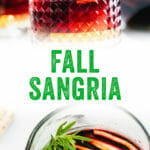 Get ready to be amazed by the best fall drink recipe! This Fall Sangria recipe pairs sparkling apple cider with red wine, orange and cinnamon. In a word: wow.

WOW is all I can say about this one. Not only is this fall sangria recipe beautiful, it tastes like wearing a cozy sweater with a spiced candle in front of a roaring fireplace. (Or something equally cozy…you decide!) Alex is the cocktail recipe master of the two of us. He created this fall slash winter apple cider sangria that’s just sweet enough, cinnamon-spiced with apples, pears and orange. In my sister’s words: “I don’t usually like sangria. But this is the best sangria I’ve ever had.” Now, if you’re keeping track, she’s said “best ever” about quite a few things over here (vegan pumpkin bread, pumpkin muffins, etc.). But I’d have to agree with her…in all cases. Here are the secrets to our favorite fall drink recipe.

How to make a fall sangria recipe

Sangría is a traditional wine punch that originates from Spain. A classic sangria is made with red wine and chopped fruit, and often orange juice or brandy. (There are lots of sangria variations as well: peach sangria, white sangria, apple cider sangria, etc.) I studied abroad in Spain in college, so anything Spain-related is my favorite. But you’ll find that many Americanized recipes for sangria make it much too sweet: it basically tastes like fruit juice.

Here’s a fall sangria that’s closer to a true Spanish sangria in flavor! It’s robust and dark, featuring apples, pears, and orange soaked in Spanish red wine. There’s a little cinnamon thrown in for a kick. To serve, you’ll add ice to the glass, then use half sparkling apple cider or regular apple cider, and top with the red wine mixture. If you’d like, you can pour it in layers to make it two-toned, like these photos Alex snapped. It’s turns into the most vibrant, cozy fall drink recipe imaginable.

Here are the basic steps for this fall sangria recipe (see the full recipe below):

What red wine to use for sangria?

What type of red wine should you use for sangria? Any dry red wine will work for the sangria. Again, this is a more traditional Spanish sangria where dry flavors meld with fruity: you don’t want the wine to be too sweet!

If you want to be even more traditional, use a Spanish dry red wine. Our favorite is a Tempranillo from Rioja, which is what we used when we made this fall sangria. Its vibrant color and fruity tasting notes are perfect for this drink.

How to serve this sangria

The best part of a good fall sangria recipe is the garnish, of course! In this cocktail we used a cinnamon stick, a branch of rosemary (we’re growing some in our garden), and an orange round from the remainder of the orange. Of course, you can use whatever you’d like that goes with the fall theme (any ideas?).

In terms of glasses to use for sangria, one you probably already have on hand is a wine glass. We typically use a stemless wine glass. However, here we decided to serve it in these Old Fashioned glasses because we liked the look! Or, it could work with a lowball glass if you have that type of glass on hand.

This fall sangria recipe is…

Get ready to be amazed by the best fall drink! This Fall Sangria recipe pairs sparkling apple cider with red wine, orange and cinnamon. In a word: wow.

Here are a few more winter and fall drink recipes: