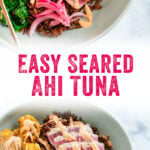 Alex and I get a lot of questions about fast meals. And there is nothing quite like seared tuna as an easy dinner idea. Seared ahi tuna is one of the most delicious foods on the planet, and it literally cooks in less than 5 minutes! Put it together with leftover veg or rice and you’ve got a quick dinner. When we started this website, we mainly posted vegetarian and vegan recipes. However, most of you know that Alex and I are flexitarian: meaning that we eat mostly veggies but also flex once in a while to eat fish and good quality meats. So, we felt like it was time to share this 3 ingredient quick dinner trick!

How to sear tuna

Seared tuna is one of the first quick dinner ideas Alex and I used to make when we first started cooking together! If you’ve never had ahi tuna, it’s time to start. NOW! Seared ahi tuna does not tasty fishy at all. So if you’re looking to convince someone ambivalent about seafood, seared tuna is a great place to start. The flavor? Seared tuna is so, so delicious. It tastes buttery on the inside and salty savory on the outside. It’s one of both Alex and my favorite foods and contains a ton of nutrients, especially for people who eat mostly vegetarian and vegan like us.

How to sear tuna? It’s so quick and simple:

What tuna to buy for seared ahi tuna?

When shopping for ahi tuna, look for fish that’s labeled sushi-grade or sashimi grade. While there are no specific regulations around the label sushi-grade, it means it’s high quality fish that is safe to be eaten raw. (Read more here.) Look at your local fish counter for a tuna steak that has a firm texture and a bright red color.

Alex and I were able to find frozen sashimi grade ahi tuna at our local grocery store. It was sold in a little box and intended for making sushi or sashimi at home. But it is perfect for making seared ahi tuna! If you buy frozen, just pull it out of the freezer and let it thaw in the refrigerator the day of serving. You can also find ahi tuna at your local fish counter.

Another great way to use sashimi grade ahi tuna? Poke bowls! Head over for more about ahi poke and how you can serve it.

How to serve seared tuna

Searing tuna is truly a 5 minute recipe! However, to make it a 5 minute dinner it’s easiest to have a bunch of leftovers on hand for serving it. For our seared ahi tuna dinner, Alex and I used up some of the components we had on-hand. We had just made Cauliflower Tacos with Yum Yum Sauce, so we realized that many of those components could be reworked to make a seared tuna bowl. Turns out Yum Yum sauce is perfect as a seared ahi tuna sauce too! Here’s how we accessorized our seared tuna:

Of course, you could serve your seared tuna with all sorts of things: with rice, over a greens as a salad, and with any of our sauces as a drizzle.

This seared ahi tuna recipe is…