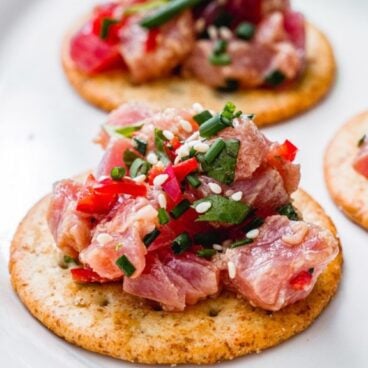 Tuna tartare is the ideal way to use a piece of ahi tuna! An impressive appetizer recipe, it pairs bold flavors with sushi-grade fish.

Got a great piece of ahi tuna? Let’s make tuna tartare! Pairing the bold flavors of soy sauce, lime and toasted sesame oil makes magic with this sushi-grade fish. It’s the ideal spread for crackers or toasts. This classic recipe came on the scene in the 1980s as a spin-off on the French beef-based version, but today it has various incarnations. Here’s our favorite way to make it into an easy appetizer recipe that will wow everyone.

What is tuna tartare?

Tuna tartare is a dish of small chunks of raw sushi-grade ahi tuna tossed with seasonings. Japanese chef Shigefumi Tachibe invented the dish in 1984 at Chaya Brasserie in Beverly Hills. It was originally a spin on the classic French dish beef tartare, which features raw beef molded into a dome and topped with a raw egg yolk.

Chef Tachibe noticed his American patrons weren’t quick to order raw beef. As he looked around his kitchen, he had the inspiration to use ahi tuna as a substitute for the beef. Tuna tartare was born. (Read more here.)

Chef Tachibe’s original recipe for tuna tartare was similar to beef tartare, with French flavors like pickles, onion, capers, tarragon, and a mayonnaise sauce. But over the years, restaurants have taken the concept and made variations on it (as chefs do!). A popular variation is mixing the ahi tuna with Asian-style flavors like soy sauce, rice vinegar, sesame oil, and sesame seeds and served on crackers or toasts. (In fact, it’s very similar to the flavors in ahi poke!)

Note: Often avocado is used in tuna tartare. We opted to avoid it here since we prefer the texture without and it saves better refrigerated.

What to look for when buying ahi tuna

Since you’re using raw fish for tuna tartare, look for ahi tuna labeled sushi-grade or sashimi grade. While there are no specific regulations around the label sushi-grade, it means it’s high quality fish that is safe to be eaten raw. (Read more here.) Look at your local fish counter for a tuna steak that has a firm texture and a bright red color.

You can also find frozen sashimi grade ahi tuna at some grocery stores. It’s sold in a small box and intended for making sushi or sashimi at home. But it is perfect for making tuna tartare as well! If you buy frozen, pull it out of the freezer and let it thaw in the refrigerator the day of serving.

There are two main ways to serve tuna tartare: on its own, or on crackers or toasts as an appetizer. Here are some details on each one:

Jump right to the recipe if you’re ready to make tuna tartare! Here are a few notes about making and serving it:

And that’s it! Let us know if you try our recipe below: and remember! There are lots of ways to make tuna tartare.

Ahi tuna is one of our favorite ingredients to work with! Here are a few more tuna recipes for preparing it: 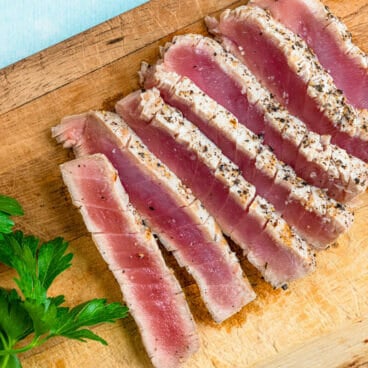 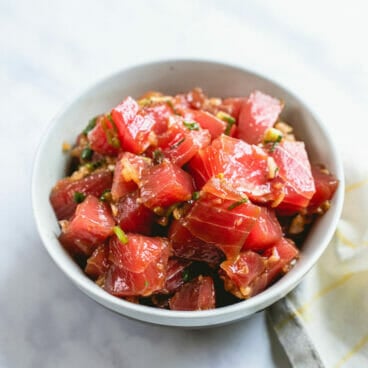 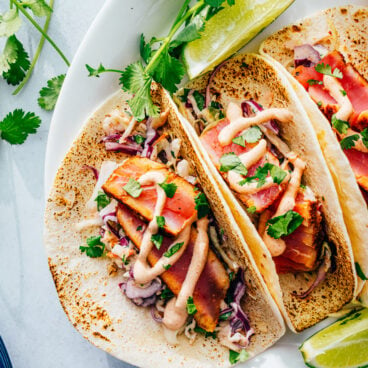 This tuna tartare recipe is…

Tuna tartare is the ideal way to use a piece of ahi tuna! An impressive appetizer recipe, it pairs bold flavors with sushi-grade fish.

*If desired, you can also serve this as a single serving main dish portion.