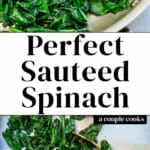 Wow, is this sauteed spinach something to write home about! Let’s go on record: Alex and I both love cooked spinach in recipes. But we didn’t think we liked straight-up sauteed spinach…until now. This spinach is scented with garlic, wilted until it’s bright green in a bit of olive oil. It’s finished off with lemon juice to give it a brightness. The flavor is fresh and vibrant, not lifeless and mushy as you would expect. This healthy side dish uses 3 large bunches of spinach, and Alex and I accidentally ate it all ourselves. It was that good.

Are you intrigued? What are the secrets to the very best sauteed spinach? Well, a few things that apparently cooks in 1950’s America weren’t privy to. Even better: it takes only 10 minutes to make! Here are all the secrets to making spinach taste amazing:

If you want to eat more spinach, this is the recipe for you.

Really! This sauteed spinach comes out so flavorful, you’ll find yourself sneaking more of it onto your plate. (Well, we did.) An interesting thing about spinach: its volume fresh seems very large, but when it’s sauteed it wilts into almost next to nothing.

When you see 3 large bunches of spinach, you’ll swear there’s no way you could ever eat them. And you couldn’t if they were fresh. But saute it down with olive oil and it loses most of its volume. Alex and I accidentally ate this recipe just the two of us in one sitting! So it’s a GREAT way to eat spinach without even realizing it. This easy plant based side dish is so delicious, even your dad might get over his childhood phobia. (I’m hoping mine will.)

Fancy it up: add a topping!

Take this sauteed spinach over the top by adding a fancy topping! Our Sauteed Rainbow Chard recipe features a topping of Parmesan cheese and toasted pine nuts that adds savory flavor and crunch. This Italian-style topping takes this spinach the extra mile and would be great for a dinner party.

Is it better to use spinach bunches or baby spinach leaves?

Good question! Either works. Spinach in bunches actually works great here! This is what we used, and it’s the perfect way to use bunch spinach. Because you’re cooking it down and adding flavor, it’s not as “in your face” as it could be in a salad. But baby spinach leaves or spinach that comes as leaves in a box also works!

A note on sustainability: Alex and I do love the convenience of buying pre-washed baby spinach in plastic boxes at the grocery. But because we’re working to minimize our single use plastic consumption, we’ve been trying to buy more greens in bunches lately. Yes, it does take a little longer to wash and prepare: but it’s worth it in the long run.

Does sauteed spinach make you stronger?

Well, yes and no! It doesn’t make you strong like Popeye said it would. However, it does fill you with vitamins and nutrients, which can make you healthy and strong! Spinach is one of the 20 best vegetables you can eat. Here are some of the benefits that this sauteed spinach offers as a healthy side dish:

There are lots more tasty spinach recipes that we love. If you’re looking to eat more leafy greens outside of this easy side dish…here’s how to do it!

This sauteed spinach recipe is…