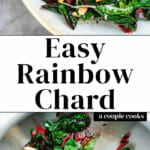 Make chard taste incredible with this sauteed rainbow chard recipe! Amp the flavors in this easy side dish by adding pine nuts and Parmesan.

Looking to eat more leafy greens? Aren’t we all. Leafy greens like spinach, kale, and chard are some of the best vegetables you can eat. But Swiss chard is an underrated player in the game, right? Think of all the popular spinach and kale recipes: spinach artichoke dip, kale Caesar salad, kale chips… Then think of what you eat with chard. (Silence.) At least here in America, chard has been long overlooked. But think again! It’s an incredibly tasty green when prepared correctly. And this easy side dish is here to wow your palate.

Rainbow chard: does it taste better than kale?

Kale is the darling leafy green of the moment. But let’s talk about rainbow chard, its lesser known cousin! Chard, also called Swiss chard, is a leafy green vegetable used in Mediterranean style cuisine. Its large leaves are used in lots of Italian style dishes like sauteed as a side dish, in pasta, or on pizza. The flavor of chard is much milder than kale: it’s closer to spinach. So yes: some people argue that it’s an easier flavor to like than kale! (Though we love the sweet flavor of Tuscan kale.)

Chard is actually related to beets, not spinach or kale! You’ll notice the tops look similar to beet greens. Rainbow chard actually isn’t a variety at all! It’s actually three varieties of chard that are sold together: white-stemmed Swiss chard, red chard, and golden chard.

How to cook rainbow chard

You barely have to do anything to rainbow chard to make it taste good! Just throw it in a hot pan with olive oil and garlic, then salt it to taste. It turns into an easy side dish in just 10 minutes. You don’t even need to mince the garlic: you’ll throw in the whole cloves to the pan. We like this method because it infuses the chard with a subtle garlic flavor: and you don’t run the risk of overcooking the garlic. Here’s how to cook rainbow chard:

Sauteed rainbow chard is a classic easy Italian side dish. Chard is often served in Italian cuisine with pine nuts and raisins, golden raisins or currants to bring a sweet and savory note. For this recipe, we decided to skip the raisins in favor of a handful of Parmesan cheese to stay fully savory.

We highly recommend serving it with these two options to take it over the top! The toasted pine nuts add a nutty essence, and the Parmesan cheese give just the right savory note. The moment Alex and I tasted the chard with this these garnishes, our eyes grew large. It really steps it up a notch! If you eat a plant-based diet, go with just the pine nuts. If you can’t find pine nuts, try toasted almonds.

How to toast pine nuts (and is there a substitute?)

Toasting nuts brings out their nutty essence to the fullest. And you can definitely taste the difference! We highly recommend toasting your pine nuts before adding them to the chard. Here’s what to do:

What if you can’t find pine nuts? Or they’re too expensive? Pine nuts are notoriously expensive because they’re difficult to harvest and only grown in a few regions of the world. If you can’t find them, there are several substitutes. You could top with toasted chopped almonds, cashews, or pistachios.

This sauteed rainbow chard recipe is a healthy side dish for serving with Italian and Mediterranean style meals. It also works in bowl meals! Alex and I have served it in a grain bowl with quinoa and various other veggies. But the best way as is an elegant side (in our opinion). Here are a few great ways to serve it:

This rainbow chard recipe is…

Vegetarian and gluten free. For vegan, plant-based, and dairy-free, omit the Parmesan cheese.

Make chard taste incredible with this rainbow chard recipe! Amp the flavors in this easy side dish by adding pine nuts and Parmesan.