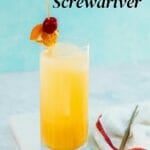 Here’s how to make the popular Screwdriver drink: one of the easiest cocktails in existence! OJ and vodka never tasted so good.

Got OJ? Got vodka? Let’s make a Screwdriver! The Screwdriver is one of the easiest cocktails there is, ideal for afternoon drinks or brunch. Cocktail connoisseurs might call it low brow…and let’s be honest: it is. But there are lots of legit two-ingredient drinks! First, we’ll show you how to make a traditional Screwdriver, which is pretty straightforward. Then we’ve got a few ideas on how to step it up and make a more interesting spin on this drink.

What’s in a Screwdriver drink?

The Screwdriver is a highball cocktail made with orange juice and vodka. The exact origin story of this drink is unknown, though people like to claim it was invented by American oil workers who didn’t have a spoon and stirred the drink with a screwdriver. (Sounds like an urban legend to us!) Whatever the case, the mention of this drink in print was in 1944 in a Newsweek article. So it’s at least that old!

How to make a Screwdriver

Just like a Rum & Coke, all you need to know to make this drink is the Screwdriver ratio. Here’s how to make a Screwdriver:

What does a Screwdriver taste like? Mostly like orange juice, with a faint vodka finish. Because vodka has a mild flavor, it’s almost impossible to perceive it in this drink. Even using high quality vodka doesn’t turn it into a more interesting drink. So how to make it more interesting? Keep reading.

Ways to spice up a Screwdriver

The Screwdriver drink itself is a straightforward cocktail: it’s tastes like orange juice with a subtle spicy finish. We don’t mind it straight up, but it’s nothing to write home about. So we like to spice it up to give it a little more intrigue in the flavor. Here’s what we recommend:

Outside of the Screwdriver, there are lots of great orange juice cocktails! Here are a few we’d recommend:

When to serve a Screwdriver

A Screwdriver works for just about anytime: brunch or lazy afternoons on the patio. Drink it as a:

Here’s how to make the popular Screwdriver drink: one of the easiest cocktails in existence! OJ and vodka never tasted so good.

What’s better than easy cocktails with only 2 ingredients? (Nothing.) Here are a few more 2-ingredient cocktails to try…that end up being cheap drinks too!