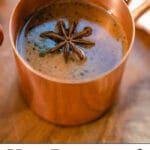 Here’s how to make hot buttered rum! This cozy spiked drink is great for chilly fall evenings or as a cocktail for holiday season.

Here’s a drink that’s ideal for sipping by the fire on a chilly evening: Hot Buttered Rum! Even just saying the name makes you warm inside. This historic drink has been around for centuries. Modern takes on it get a little wacky, so we’ve gone back to its roots to bring you the “real” way to make it. This version is subtly sweet, cozy-spiced with cinnamon and allspice, and spirit-forward with boozy dark rum. Oh: and there’s just enough butter to make it lightly creamy. It’s enough to warm your toes…and your soul.

Hot buttered rum is a drink of dark rum, hot water or cider, butter, sugar, and spices. It’s been around since approximately the 1650’s, when rum distilleries opened in New England and colonists started adding rum to drinks and punches. This is around the time drinks like the hot toddy, milk punch, and eggnog came to be. Each family would have their own “house” version of this warming drink.

How to make hot buttered rum

The concept behind hot buttered rum is to make a “hot buttered rum batter.” The batter features butter, sugar and spices. Each drink has a dollop of the batter along with rum and hot water. Our take on the recipe stays true to the historical version: there’s just enough butter and sugar to make it lightly sweet and creamy: but it’s not like a milkshake. The ingredients in hot buttered rum are:

Modern hot buttered rum recipes have more sugar than the colonial recipe, when sugar was a luxury! Some use apple cider instead of hot water. Other recipes include vanilla ice cream in the batter, which adds creaminess but also lots of calories and more sugar. Over here, we prefer it truer to the original: less like a milkshake, more like a sweeter version of a hot toddy.

Do you love sweet drinks? If you’d prefer a version of hot buttered rum that’s ultra sweet for holiday parties and entertaining, it’s easy to tweak. Here are a few options:

Make sure to use a great dark rum for hot buttered rum: the white or light variety does not work as a substitute! Light rum is used for tropical drinks like daiquiris and piña coladas. Here’s a breakdown of the differences between the two liquors:

Want more drinks with dark rum? Here are a few rum cocktail ideas for how to use up a bottle:

When to serve hot buttered rum

This hot alcoholic drink is great for parties, the holiday season, and for chilly evenings! Serve it as a:

Here’s how to make hot buttered rum! This cozy spiked drink is great for chilly fall evenings or as a cocktail for holiday season.

For the spiced butter (4 drinks; multiply as desired)

*Some recipes use apple cider for a sweeter spin. We prefer drinks that are lightly sweet and boiling water is most traditional.

Looking for more cozy drinks like this one? Some of our favorite warming drinks for the season are: