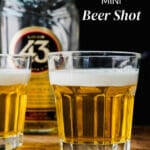 This Mini Beer Shot doesn’t have beer at all! Here’s how to make the popular little shot with Licor 43 liqueur and heavy cream.

It looks like beer, but we’ve got a secret. This Mini Beer Shot has nothing to do with a cold brew at all. Nope, this is a shot of a different nature: it pairs tasty vanilla Licor 43 liqueur and cream. The flavor? Sweet, nuanced, and delicious: essentially the exact opposite of beer. It’s a fun novelty: especially for people trying this tasty liqueur for the first time. One of our Instagram followers told us about this drink since she knew we were Licor 43 fans…and of course we had to try it!

A mini beer shot is a shot made with Licor 43, a Spanish vanilla liqueur, and heavy cream. The bright yellow liqueur simulates the beer, and the heavy cream looks like the frothy foam on top. Pour it into a tiny beer mug, and it looks exactly like a little beer!

What does a mini beer shot taste like? A mini beer shot tastes sweet and aromatic, with notes of vanilla, orange, and cinnamon and a creamy finish. It is very sweet, so serve it as a dessert drink for after dinner. The flavor is similar to a B52 shot, which layers Kahlua, Baileys, and Grand Marnier orange liqueur. If you don’t love sweet drinks, steer clear of this one.

How to make a little beer shot

How to make a mini beer shot? It’s as simple as pouring two ingredients into a glass. Here are two small tips to consider during the process:

Where to find mini beer glasses

Keep in mind: Licor 43 is very sweet, so you won’t want to drink more than 1 ½ ounces of the stuff. If you’re not someone who loves sweet drinks, this isn’t the shot for you. To be honest, we enjoy Licor 43 more mixed into cocktails than drinking it as a shot. But we can’t deny the novelty factor!

Is Licor 43 really worth buying? After making 300+ homemade cocktails, we think so. We first bought Licor 43 to make carajillo, a spiked coffee, and we’ve been using it ever since. Here’s what to know about this unique liqueur:

When to serve a mini beer shot

A mini beer shot is a good after dinner drink, but it works anytime. Serve it as a:

This Mini Beer Shot doesn’t have beer at all! Here’s how to make the popular little shot with Licor 43 liqueur and heavy cream.