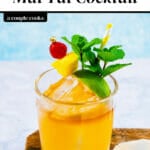 The Mai Tai might sound like a fruity resort drink from the 1990’s, but it’s anything but! No, this drink is a classic cocktail from the 1940’s that’s been (cough) ruined by saccharine sweet versions intended for tourists. How to make a real Mai Tai? Well, this rum cocktail is breathtakingly complex, featuring rum, orange liqueur, and fancy almond syrup. It’s just sweet enough, with nutty and vanilla notes against the sharp citrus. Float a little dark rum on top, and you get to the core of a Mai Tai: it’s sophisticated, nuanced, and might we say…extraordinarily special. Here’s how to make this classic!

Full disclosure: we weren’t fans of what we thought was a mai tai…until we tasted the classic version! The Mai Taic cocktail in its original form makes sense. It’s tropical, nutty, boozy and zingy: and it’s nothing like the adult fruit juice you might be expecting. (I ordered a Mai tai at a bar recently and it tasted like a Hawaiian punch juice box. No thank you!)

Of course, there are multiple personalities who try to take claim for this classic cocktail. The most widely accepted story is that it was invented in 1944 at Trader Vic’s restaurant in Oakland, California. It became very popular in the 1950’s and 60’s, especially at tiki restaurants. (And since Tiki culture is built on appropriation, we won’t exalt the virtues of that phenomenon!)

What’s in the original Mai Tai? Contrary to what you might think, there’s no pineapple juice! There’s actually no fruit juice at all, other than lime juice. The classic Mai Tai cocktail is on the list of International Bartender Association’s IBA official cocktails, meaning that it has an “official” definition. The ingredients in a Mai Tai drink are:

As a note, the classic Mai Tai ingredients also often include simple syrup. We prefer it with only orgeat syrup to capitalize on its special flavor to the fullest. Speaking of…

What is orgeat syrup? Is there a substitute?

Alex and I have ordered cocktails with orgeat syrup at bars and been mystified at this ingredient. What is it? Do you have to have it in a Mai Tai? Here’s a breakdown:

A Mai Tai recipe traditionally uses orange curaçao, but it can be hard to find. Here are a few notes on what else to use as a substitute:

Two types of rum for the best flavor

Many Mai Tai recipes use two types of rum mixed into the drink. Our version takes it a step further and floats the dark rum on top! It makes for a showy presentation and it’s become a tradition that some people like in their version of this drink. Here’s a bit more about the two types of rum you’ll need:

What other cocktails can you use these rums for? Use aged rum in an El Presidente or Pineapple Rum Cocktail, and dark rum in a Dark and Stormy or Jungle Bird.

How to make a Mai Tai

So you’ve got your orgeat syrup, stocked up on golden and dark rum, and figured our your orange liqueur. Now it’s time to make a Mai Tai cocktail! This is the easy part: shake it up, then garnish. That’s all there is too it!

When to serve a Mai Tai

The Mai Tai drink is a festive and fun cocktail, great for parties or impressing guests! It’s great as a: