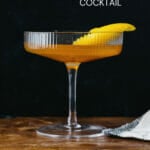 Despite its name, the Japanese Cocktail is an 1860’s American classic brandy drink! Orgeat syrup gives it an almond essence.

It might be called the Japanese Cocktail, but this drink isn’t related to Japanese cocktails or cuisine. It doesn’t even have Japanese whiskey! But this American classic cocktail is worth a try. Grab your favorite brandy or Cognac then sweeten it with orgeat, a tasty almond cocktail syrup. Add a few shakes of bitters and it comes out nutty with a hint of citrus and an herbal finish from the bitters. In fact, it’s one of the best ways to class up a great brandy. Wondering where the name came from? Us too.

What’s in a Japanese Cocktail?

The Japanese Cocktail is an American classic cocktail made with brandy and orgeat syrup. The recipe was first published in an 1862 book, The Bar-Tender’s Guide by Jerry Thomas, the first ever drink book published in the United States. In fact, Mr. Thomas was nicknamed the “Professor” because of his wide knowledge of bartending, and is considered the “father of American mixology.” The Japanese Cocktail is thought to be one of his only original recipes in the book.

Why is it called the Japanese Cocktail? There’s nothing about the ingredients that’s traditionally Japanese! Instead, it’s thought to be inspired by the first Japanese diplomatic mission to come to the US in 1860. The delegates stayed in a hotel across the street in New York City from Jerry Thomas’s bar. Here’s what’s in the Japanese Cocktail:

The brandy to use

What brandy to use in this Japanese Cocktail! If you have it, our top choice is Cognac. But there are a few other choices that work well. Brandy is a liquor made from distilling wine or other fruit, like apples or apricot. Each type of brandy will yield a different drink! Here’s what to try:

What not to use? Pisco, a Peruvian brandy made of fermented grapes with a funky, earthy flavor. Save that for a Pisco Sour!

What is orgeat syrup?

The other ingredient you’ll need for the Japanese Cocktail? Orgeat. If you don’t have it already, we recommend grabbing it: it’s a fun substitute for simple syrup because it has a more intruiging flavor. Here’s what to know about orgeat:

Lemon juice isn’t specified in the original Japanese Cocktail recipe by Jerry Thomas. But it’s a nice way to add a little brightness to the drink! We never turn down a little lemon, so we added just ¼ ounce (½ tablespoon) to this cocktail. The effect is a hint of zing, but it’s not necessary: especially if you don’t have a lemon on hand.

However, the traditional garnish for this drink is a lemon twist! So if you want to make it look perfectly traditional, the lemon is key. Here’s how to make a lemon twist without any special tools.

Got a great bottle of brandy? After you’ve made the Japanese Cocktail, use it for any of these great Cognac Cocktails or Brandy Cocktails:

When to serve a Japanese Cocktail

The Japanese Cocktail is sophisticated and versatile. It’s perfect for sipping as a:

Despite its name, the Japanese Cocktail is an 1860’s American classic brandy drink! Orgeat syrup gives it an almond essence.