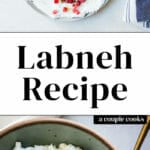 Labneh is yet another Mediterranean food that we found in Mexico (incidentally enough!). We ordered it with a trio of dips that also included hummus and baba ganoush. It seemed that the creamy, slightly sour cheese must be some sort of fancy Middle Eastern concoction. We learned that labneh, known as labneh cheese or yogurt cheese, was no more than strained yogurt. The first labneh recipe I found made it look so easy that I insisted on checking it three or four more places just to make sure. Keep reading for our labneh recipe!

Labneh, known as labneh cheese or yogurt cheese, is simply yogurt that’s strained overnight and then mixed with salt. This extra thick Mediterranean yogurt cheese is a suitable dip for pita or veggies. The consistency and taste is somewhere between sour cream, yogurt, and cream cheese. It’s generally served with olive oil and some spices or herbs (paprika, garlic, thyme, etc).

It’s also tasty as a sandwich spread, or for anything else that needs a bit of zest. You could even experiment with using it in baked goods in place of cream cheese or Greek yogurt—the possibilities are endless!

How to make labneh: a tutorial

To make this super thick, strained labneh cheese you’ll start with a container of plain yogurt. Whole milk yogurt works best for this labneh recipe since it’s thicker than nonfat yogurt and has a lot more flavor. And if you want a really thick labneh, use plain Greek yogurt instead of regular yogurt (you might not need to strain the Greek yogurt for as long, though). Here are the basic steps for how to make labneh (or head to the full recipe):

Once you’ve stirred in the yogurt, you simply have to pour it into a cheesecloth and tie it onto a wooden spoon. Suspend the spoon over the mouth of a pitcher. Then place it into the fridge for a full 24 hours to give the whey plenty of time to separate from the yogurt.

Step 3: Remove from the cheesecloth. Refrigerate or use immediately!

After 24 hours have passed, you should be left with a thick, creamy labneh. Homemade labneh keeps in the fridge for up to two weeks. But usually it’s all be gone by then!

What to do with leftover whey?

After making labneh, you’ll be left with protein-packed whey in the bottom of your pitcher. What to do with the leftover whey from making labneh? You can try using it in breads, smoothies, and more. In all honesty, we’ve never reused the whey ourselves, but we’re interested in experimenting with it. Let us know if you’ve tried this in the comments below!

10 best ways to use labneh

There are so many ways to use this labneh recipe! From a dip, to a sandwich spread, to a dollop on soups and grain bowls, there are infinite uses of labneh cheese. Here are a few of the top ways to use this yogurt cheese recipe:

This labneh recipe is…