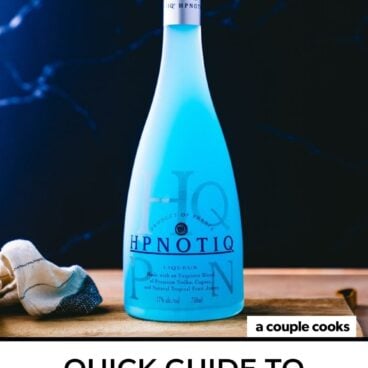 Hpnotiq is a sky blue liqueur that tastes like passionfruit and mango! Its bright color and fruity flavor make it ideal for cocktails.

It’s sky blue, it’s fruity, and it’s got major early 2000’s vibes: it’s Hpnotiq! Pronounced “Hypnotic” for those of us not in the know, this classy liqueur has a brilliant color and delightful passionfruit flavor. But is this trendy bottle worth the hype? Here’s the backstory of the blue liqueur, and whether we think it’s worth adding to your collection.

Hpnotiq is a sky blue liqueur invented in 2001, made with tropical fruit juices, vodka and Cognac. It was invented by entrepreneur Raphael Yakoby, allegedly inspired by a bottle of blue perfume he saw in Bloomingdale’s. The blue liqueur caught on after rapper Sean Combs started to sell it in his restaurant chain Justin’s in New York.

The brand became a pop culture hit, and was mentioned in rap and hip hop hits of the early 2000’s (apparently it was included in 163 song lyrics back in the day!). In 2003, Yakoby sold the brand to Heaven Hill Distilleries, Inc. for a reported 50 million dollars. It’s now bottled in France and imported to the US.

How do you say it? Say “Hypnotic.” (In fact, it’s often misspelled that way.)

Hpnotiq tastes sweet, with strong notes of passionfruit and mango and a subtly bitter finish. Critiques of the blue liqueur are that it is rather sweet and reeks of the 2000’s. But hey: some people say it’s ready to make a comeback!

How much alcohol is in Hpnotiq? It is 17% ABV (alcohol by volume), so it has a low alcohol content that’s similar to liqueurs like Baileys Irish Cream.

Are there any Hpnotiq substitutes? Not really! Blue curacao is close in color, but it’s an orange liqueur so the flavor is quite different. There’s not really a good match for this liqueur.

Hpnotiq might carry a strong 2000’s vibe, but we’re here for it! The passionfruit flavor is unique and it’s well-balanced with other fruity flavors (though it’s on the sweet side). We like it in tropical cocktails because the flavors pair well, and the famous Incredible Hulk is rather intriguing. It’s not a must-buy since it’s not used in many cocktails, but it’s a fun splurge for the adventurous home mixologist.

Compared to other liquors, Hpnotiq is mid-priced. A 750 ml bottle costs about $20.

You can drink Hpnotiq straight as a shot, or shaken with ice. Or, make it into cocktails! The most popular Hpnotiq drink is the Incredible Hulk, but you can also try it in a tropical drink like the Hypnotic Breeze or Daiquiri. 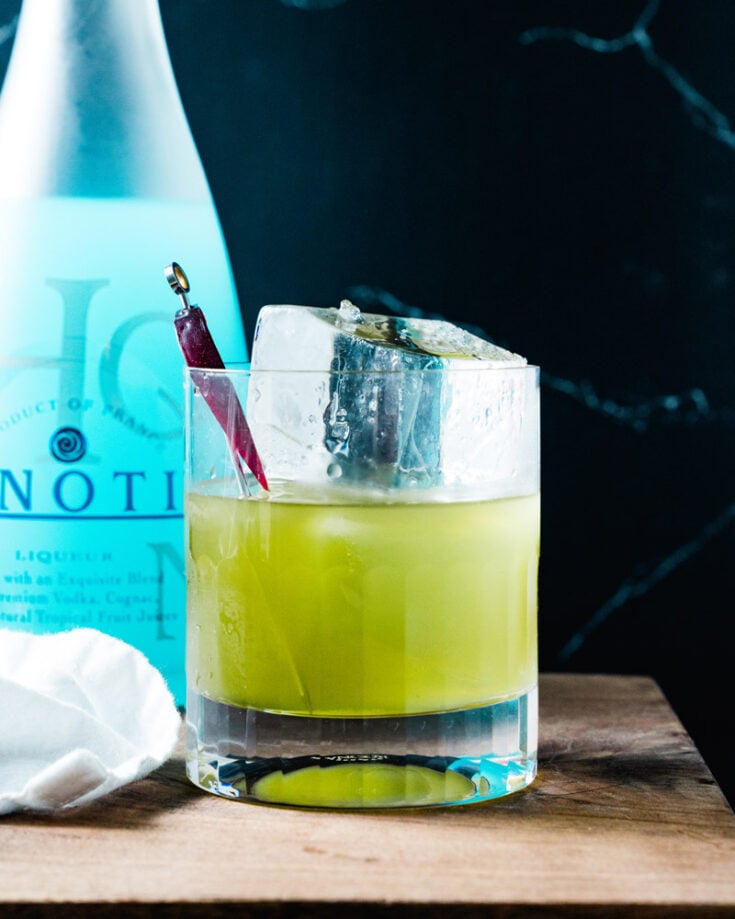 The most popular drink with Hpnotiq is the Incredible Hulk! This combination of Hpnotiq and Hennessy is weirdly satisfying, with notes of passionfruit and mango that mix with oak and vanilla. This lowball cocktail was invented in 2003 in New York City as a ploy to get more people to drink the stuff. 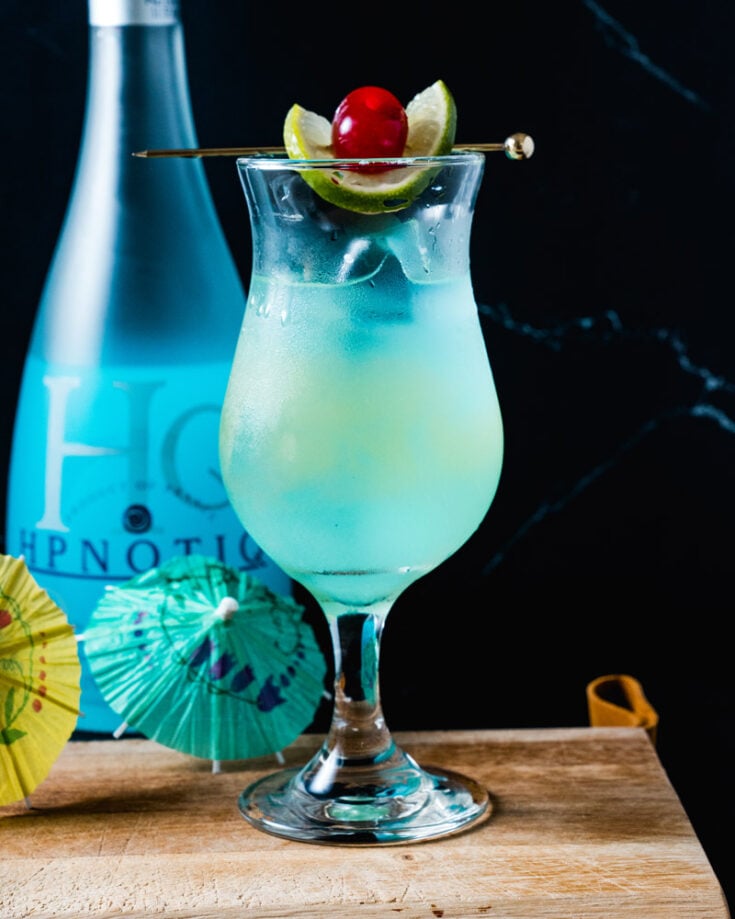 Looking for an impressive Hpnotiq drink? This sky blue liqueur tastes of passionfruit and mango, so it’s ideal for mixing into a vaguely tropical cocktail. Try the Hypnotic Breeze! It’s ocean-hued, fruity, and refreshingly sweet tart, pairing this bright liqueur with tangy pineapple and lime. 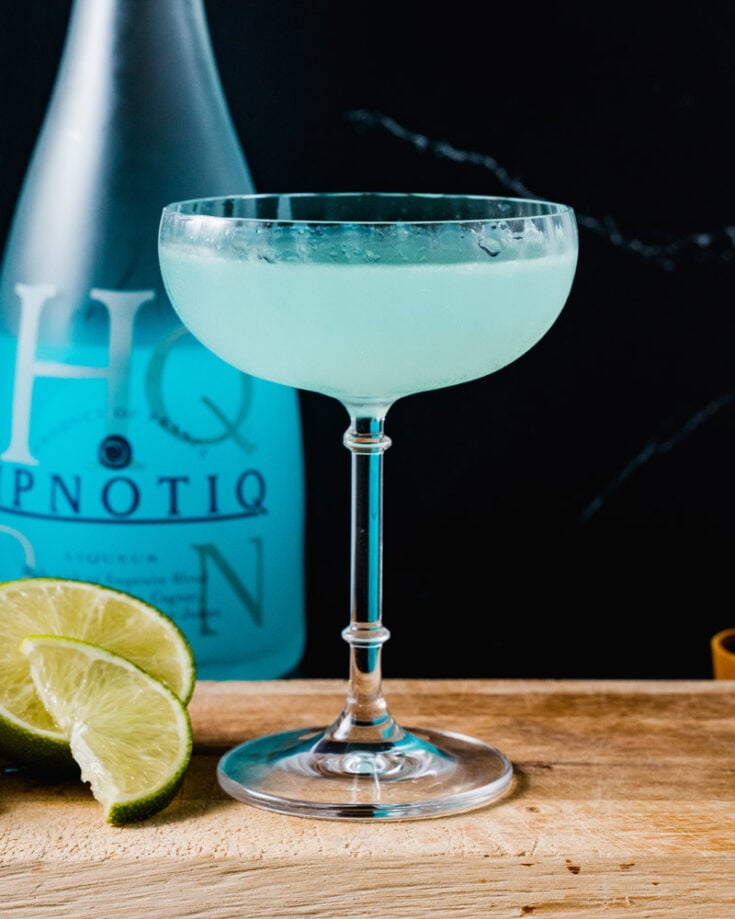 Why not turn the Classic Daiquiri into...a Hpnotiq Daiquiri? Add this bright blue liqueur to the mix, and adds fruity notes to the refreshing rum drink. Use 1 ounce each of white rum, Hpnotiq, and lime juice, and ½ ounce simple syrup.