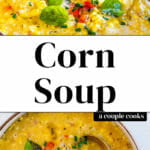 This simple corn soup is a seasonal way to enjoy fresh corn! The sunny flavor is sweet and nuanced, and it’s full of healthy vegetables.

Want a corn recipe outside of eating it on the cob? Try this Fresh Corn Soup! It’s a new favorite around here. The flavor is sweet and nuanced, full of vegetables like onion, celery, potatoes, and of course: loads of corn! Many corn soup recipes are heavy with rich cream and butter, but this one is light and healthy. On its own it’s vegan and plant-based, but we like serving it with a dollop of sour cream to make it a little more filling. Here’s how to make this tasty seasonal treat!

This fresh corn soup is different from a corn chowder. Instead of rich and creamy, this healthy soup is fresh and full of vegetables. It’s partially blended to have a chunky texture: or you can fully puree it to have it smooth. It’s up to you! We like it partially blended so it’s got both body and chunks, but that’s just us. Here are some notes on the main ingredients you’ll need:

How to cut corn off the cob

Have you ever tried to cut corn kernels off the cob, only spray them around your entire kitchen? (Two enthusiastic hands up, over here!) After years of doing the same, we finally found a better way. Yes, there’s a secret to cutting corn kernels so they collect all neatly together. All you need is a Bundt pan or tube pan, the kind you use for angel food cake. Here’s how to cut corn off the cob:

How to make corn soup: just a few tips!

This healthy corn soup isn’t rocket science: it follows the same tried and true formula of most soup recipes. Chop veggies, saute veggies, add broth and simmer. That’s what you’ve got here! There are just a few things outside of the standard motions:

Once you’ve simmered this easy corn soup, here’s where you get to put your touch on it. There are three ways to serve this soup:

It’s all about the garnishes

The fun part is the garnishes! They make it visually appealing and add a contrasting freshneses. Here’s what we’d recommend:

How to serve corn soup

Keep in mind that this fresh corn soup isn’t packed with plant based protein: it’s more of a side dish than a main meal. Here are a few things you add to make it a main dish:

This corn soup recipe is…

This simple corn soup is a seasonal way to enjoy fresh corn! The sunny flavor is sweet and nuanced, and it’s full of healthy vegetables.