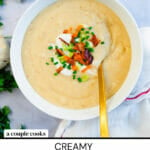 This creamy vegan potato soup is the stuff dreams are made of! Cozy and rustic, you’d never guess it was plant based.

Here’s a recipe that’s cozy and creamy, perfect for wrapping your hands around a cup in chilly weather. Try our best Vegan Potato Soup recipe! This one is so full of flavor and impossibly dreamy that you’d swear it had cream or milk in it. Turns out, it’s easy to make a potato soup without dairy that’s the equivalent of wearing a cozy sweater next to a roaring fire. There’s no blender needed: this soup is beautifully chunky and flavored with savory Old Bay. Load it up with toppings and it’s a stunner. We couldn’t stop shoveling in bites!

What’s the magic behind this vegan potato soup? This one is a spinoff on our Loaded Potato Soup, with a few simple tweaks to make it plant based. The flavor is out of this world good. Here are the ingredients you need for a vegan potato soup:

Vegan potato soup is tricky: not only can it not use cream and butter, there’s no dairy milk allowed. What’s the best non-dairy milk to stand in that can still provide creaminess? Here’s what we’ve found:

No blender needed: use a potato masher!

This vegan potato soup recipe is naturally creamy: there’s no need for a blender! Cook the potatoes until they’re falling apart, then mash them right in the pot using a potato masher. This cuts down on mess, and makes for a great creamy but chunky texture (my favorite part about this easy potato soup). Personally, we love potato soups with a bit of texture: not ones that are perfectly smooth. This one hits the mark for us!

The next challenge to a vegan potato soup recipe: what to use for toppings? With no cheese, bacon, or sour cream allowed, there’s still plenty of options! Here are our favorite toppings to make a loaded vegan potato soup:

Want to make a vegan potato leek soup instead? Potato leek soup is one of life’s great pleasures: the leeks add even more savory, oniony flavor to the potato puree. Here’s what to do if you’d like to transform this soup:

Last idea for mixing up this potato leek soup: want to add more protein? You can add sliced vegan sausage to the soup and simmer until heated through, just a few minutes. We happened to have a vegan sausage in the refrigerator when we made this soup, so the next day we tried it. It’s even more filling!

When you’re shopping for a vegan meat substitute, check the package ingredients to make sure it’s not too processed. There are several brands on the market now that are made with real food ingredients: but you’ll have to review the ingredient list. Also make sure the ingredients fit your dietary preferences (some contain gluten or egg).

Once you’ve got your vegan potato soup recipe, what to serve with it? There are lots of great sides to go with potato soup. Here are a few that would be fantastic here:

This vegan potato soup recipe is…

This creamy vegan potato soup is the stuff dreams are made of! Cozy and rustic, you’d never guess it was plant based.

*To make vegan potato leek soup: Substitute 3 large leeks for the shallots. Chop off the dark green stems of the leeks and the bottom root, then slice them in half lengthwise. Place each leek half cut-side down on the cutting board, then chop it into thin slices, resulting in half-moon shapes, then rinse them thoroughly in a colander. Add the leeks with the garlic and cook about 4 minute until tender, then follow the remainder of the recipe.