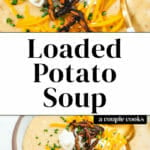 Loaded potato soup is the ultimate cozy dinner idea, and this one is so easy to make! It’s all that’s great about a baked potato, remade as a healthy soup.

Ready for our new favorite cozy and healthy soup? Loaded potato soup. Who could pass that up? (I mean, really!) This one is impossibly creamy with intermittent potato chunks, using no heavy cream at all! Old Bay gives it an irresistible undertone. It’s so easy to make: you don’t even need a blender! And like any good recipe, the best part is the toppings. You can use whatever you like best: Alex and I chose old standards like shredded cheese, sour cream and chives, but added a new-to-us twist. Keep reading for all our secrets to what we think is the best loaded potato soup you’ll find.

So! Most loaded potato soup recipes have loads of cream and butter. This one is ultra creamy using milk and a moderate amount of butter. It also has intermittent potato chunks, which makes the soup taste even heartier! We found we prefer this to a fully pureed texture. And that means you don’t even need a blender to make it! When Alex created this recipe, he hit on genius (in my opinion). Here are are the secrets to this tasty soup.

Got a pressure cooker? Go to Instant Pot Potato Soup.

You’ll start with a large pot or Dutch oven. Melt the butter, then saute the shallots and garlic for a few minutes. Then you’ll add the flour: this makes a “roux” to thicken the soup. Cook the flour for about 2 to 3 minutes. Once the liquid is added, the flour will thicken it nicely. This trick is used often in creamy sauces and originated in French cooking. (For gluten-free, you can use 1 for 1 gluten-free flour.)

Add the vegetable broth, milk, potatoes, salt and Old Bay. You’ll simmer for about 25 minutes, until the potatoes are so tender they fall apart when you mash them against the side of the pot. Important: make sure the mixture does not boil! Keep the heat on very low. Stir often and scrape the bottom to make sure nothing sticks. The soup will become very thick.

Remove the soup from the heat and mash it until the desired texture forms. The soup will be creamy but with small chunks of potatoes. Alex and I found that makes the most satisfying texture for a loaded potato soup, versus having it completely pureed. Stir to incorporate the mashed potatoes.

And now, you’re ready for the best part of a loaded baked potato soup: the toppings! Keep reading for all our favorites.

This loaded potato soup is the canvas for all of your favorite potato toppings! Here’s what we added to ours, some standard and some a little more unique:

What other topping ideas you love? Let us know in the comments below! And, if you’re looking to make it into a meal? Go to Best Sides to Serve with Soup.

One of the best parts of this loaded baked potato soup (besides the toppings!) is the background hint of Old Bay. It provides the perfect flavoring. But what is it? Old Bay is an American seasoning blend that’s often used to season seafood, most notably in shrimp boils. It’s also used in chowders like this potato soup.

The main ingredients in Old Bay are paprika, celery salt, black pepper, and crushed red pepper flakes. You can find Old Bay in your grocery store in the spices aisle, or buy Old Bay online. Or, you can make your own! Try our Old Bay seasoning.

Yep! This soup contains dairy in the milk and cheese, so it’s a vegetarian soup. (If you do want a vegan version of it, give us a shout out in the comments!) To keep it vegetarian and still have that signature salty, smoky flavor of bacon, Alex and I invented a new vegan bacon recipe. It’s mushroom bacon! This bacon is made out of shiitake mushrooms, and it brings just the right smoky topping to this soup.

If you’ve never tried a vegan bacon recipe (we’ll assume many of you haven’t), never fear! It’s not weird. It’s actually extremely satisfying and the perfect topping to keep this soup a healthy meatless dinner recipe.

This loaded potato soup recipe is…

Vegetarian. For gluten-free, use gluten-free 1 for 1 flour. For vegan, go to Creamy Vegan Potato Soup.

Loaded potato soup is the ultimate cozy dinner idea, and this one is so easy to make! It’s all that’s great about a baked potato, remade as a healthy soup. Vegan variation: Go to Vegan Potato Soup.