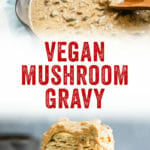 This vegan mushroom country gravy is rich and creamy: you’ll want to pour it on everything! Mushrooms, garlic, fennel, and smoked paprika pack big flavor.

It’s creamy and thick, full of savory mushrooms. It’s got just the right bite from a good dose of black pepper. Yes, this vegan mushroom gravy is so darn good you’ll want to pour it on just about everything! It’s a country gravy that Alex and I originally made for some flaky biscuits (and it was perfect). While it really makes for the best vegan biscuits and gravy, it’s also great on just about anything! Try it for Thanksgiving on mashed potatoes, or on fries as a vegan version of poutine. Ready to get cooking?

Looking for a smooth brown gravy? Go to Easy Vegan Brown Gravy instead.

The secrets to this vegan mushroom gravy

So, gravy without meat. How is this possible? We’ve got a few flavor tricks that help to make this vegan mushroom gravy tasty as meaty as possible without using actual meat. Turns out, pulling out all the savory flavor tricks of vegan cuisine actually works wonders here! Here’s what makes up this country-style gravy:

Vegan gravy has a tendency to thicken up even further as it cools. If you have leftovers of this vegan brown gravy that seem too thick to reheat properly, we recommend warming the gravy in a saucepan over low heat to loosen it up a bit. If the gravy is still too thick once it’s heated through, stir in a little vegetable broth. And we mean a little, as in a tablespoon or so! You don’t want it to become too runny.

Now, I’m guessing if you’re here you have a specific idea on what do do with your vegan mushroom gravy. (What is it? Tell us in the comments: we’re dying to know!) Alex and I originally made this for our biscuits and gravy recipe, there are lots more ways to eat it. Here are some highlights:

This vegan mushroom gravy recipe is…

Vegetarian, vegan, plant-based, and dairy-free. For gluten-free, you could use 1-for-1 gluten-free flour.

This vegan mushroom gravy is rich and creamy: you’ll want to pour it on everything! Savory mushrooms, garlic, fennel, and smoked paprika pack big flavor.