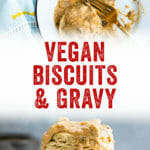 Yep, these are the best vegan biscuits and gravy! A thick, peppery mushroom gravy coats impossibly flaky biscuits. All we can say is: wow.

Are you a biscuits and gravy lover? Hailing from the state of Minnesota, I didn’t know what biscuits and gravy were until I moved south to Indiana. Here, I was intrigued to find that biscuits topped with a thick white sauce of crumbled sausage counted as breakfast. And after trying it, I found it oddly satisfying! Alex’s family are big fans of this hearty breakfast. So once Alex and I started eating more plant based recipes, we realized we’d have to find a vegan version. Thus, our vegan biscuits and gravy recipe was born! And let us tell you: it is every bit as satisfying as the original. (We think.)

Why vegan biscuits and gravy?

This website is devoted to mostly healthy, plant based recipes made with whole foods. So are these vegan biscuits and gravy a healthy, whole food breakfast recipe? Actually, not really! This one counts as an occasional treat we’d serve as part of a special breakfast or vegan brunch. This fits into our philosophy of all things in moderation: a total treat food! And man is it worth it.

Why make vegan biscuits and gravy instead of the real thing? If you love this hearty Southern-style breakfast but also want to cut back on meat, this is the perfect way to indulge. The creamy, savory mushroom gravy is every bit as comforting and cozy as a sausage country gravy. And the vegan biscuits are impossibly flaky. In fact, it’s one of our favorite veggie-based recipes for meat eaters.

These are the best vegan biscuits.

If you love to eat plant based, these vegan biscuits must be on your list of things to try! They’ve got those signature layers, but are made 100% of plants. The secret? Vegan butter. Because so many vegan butters are processed, Alex and I don’t often use it in our cooking. But these days, it’s getting easier to find a minimally processed vegan butter. When we tested these biscuits with coconut oil, they were dry and crumbly after being cooled. But vegan butter resulted in the best moist texture and savory flavor!

When you’re shopping for vegan butter for these biscuits, try to find one that is minimally processed with real food ingredients. Another plus is using organic! We used Miyoko’s Vegan Butter, which is made with mostly cashews and coconut (and happened to be organic). Let us know in the comments below if there are other vegan butter brands that you love.

The only special tool you need? A biscuit cutter.

Let’s move on to the sauce side of these vegan biscuits and gravy! Alex and I have a great vegan brown gravy that’s perfect on mashed potatoes. But for this recipe, we needed a country gravy to mimic the pale, chunky sausage gravy that’s traditional in this recipe. It’s total vegan comfort food! Here are the secrets to this vegan mushroom gravy:

Vegan gravy has a tendency to thicken up even further as it cools. If you have leftovers that you refrigerate, we recommend warming the gravy in a saucepan over low heat to loosen it up a bit. If the gravy is still too thick once it’s heated through, stir in a little almond milk. And we mean a little, as in a tablespoon or so! You don’t want it to become too runny.

Other plant based breakfast recipes

Want to stay plant based for breakfast or brunch? Here are a few other of our favorite plant based breakfast recipes, some healthy and some more decadent:

This vegan biscuits and gravy recipe is…

Yep, these are the best vegan biscuits and gravy! A thick, peppery mushroom gravy coats impossibly flaky biscuits. All we can say is: wow.

*Prep time & cook time are for gravy only.