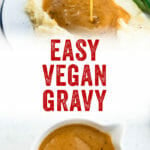 This easy vegan brown gravy takes just 15 minutes to make and is full of savory flavor! Perfect for drowning a pile of mashed potatoes.

Looking for a quick and easy vegan gravy recipe? You’ve come to the right place. Alex and I eat a mostly whole food plant based diet and this website is devoted to those recipes! While we do “flex” on holidays, one of our favorite things is to make delicious plant based versions of comfort foods. So, of course we had to try our hand at vegan gravy! We have a great vegetarian gravy recipe, but that one relies on butter and milk. A plant-based gravy can’t use dairy as a crutch…and turns out it doesn’t need it at all! This vegan brown gravy has big flavor, all from plants.

The secrets to vegan gravy

There are lots of ways to make vegan gravy. Many recipes use mushrooms to bring savory flavor (Alex and I working on a mushroom gravy recipe as we speak). Other recipes roast up a ton of vegetables and puree them to use as the base. But for this recipe, we wanted a brown gravy that was incredibly easy. Because, there’s enough work in the main meal: who wants to spend hours on gravy? Luckily, we were able to find secrets to making big flavor that’s 100% plant based:

Making this vegan gravy is easy and takes no time at all! Here are a few notes on gravy-making:

What to pour it on!

What to use this vegan gravy on? Well, we’re glad you asked! This one is a perfect vegan Thanksgiving recipe or vegan Christmas dinner recipe. We’ve got lots of vegan and plant based holiday recipes for your perusal. Here are a few favorites:

Vegan gravy has a tendency to thicken up even further as it cools. If you have leftovers of this vegan brown gravy that seem too thick to reheat properly, we recommend warming the gravy in a saucepan over low heat to loosen it up a bit. If the gravy is still too thick once it’s heated through, stir in a little vegetable broth. And we mean a little, as in a tablespoon or so! You don’t want it to become too runny.

This vegan gravy recipe is…

Vegetarian, vegan, plant-based, and dairy-free. For gluten-free, use gluten-free flour.

This easy vegan gravy takes just 15 minutes to make and is full of savory flavor! Perfect for drowning a pile of mashed potatoes.