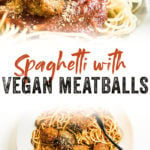 Want meatballs without the meat? This vegan spaghetti and meatballs is the best recipe you’ll find: complete with vegan Parmesan on top.

This post was created in partnership with One Degree Organic Foods. All opinions are our own.

Creating this vegan spaghetti and meatballs

In February, I took a trip to New York City right after our Pretty Simple Cooking cookbook launch and stayed my friend Gena Hamshaw of the blog The Full Helping. Trust me, if you’re on the fence about vegan food, hang around Gena for a few minutes and you’ll see how delicious it can be! Gena took me out to a fantastic vegan restaurant called Candle Cafe West. While there were lots of tasty sounding items on the menu, I stopped reading when I got to vegan spaghetti and meatballs with vegan Parmesan. It sounded so comforting and delicious, so I ordered it. And promptly fell in love.

Returning home, I told Alex about this delicious vegan spaghetti and meatballs with vegan Parmesan from New York City. Could you help me recreate a recipe? The next day, I had an event and was out late. When I got home, Alex had some really, really amazing vegan spaghetti and meatballs waiting for me. I can’t quite explain the comfort of sitting in our dark kitchen at 10 pm, twirling pasta doused with tangy marinara and topped with vegan meatballs.

Now, some of our recipe testers claim this vegan spaghetti and meatballs recipe would win over a meat lover. At the very least, they’re perfect for vegetarians and vegans who want that cozy vibe of meatballs without the meat. To us, they’re a special occasion meal when we’re in the comfort food mood.

The ingredients for the meatballs are simple: just oats, potatoes, cashews, garlic and spices! They’re best when pan fried in a bit of oil, but we’ve added a baked option below as well. High-quality marinara sauce is key here: it brings in the flavorful, savory component even more. Or you can use our Easy Marinara Sauce or Homemade Spaghetti Sauce! And the vegan Parmesan — well, we’re new converts! It’s got the texture of shaker can Parmesan cheese, but it’s fully-plant-based and super savory. >> How to make vegan Parmesan.

The farmers behind it all

Do you know the names of your farmers? Maybe for produce, but how about foods like…oats? Get this: the farmer of the oats used in this vegan spaghetti and meatballs recipe is Eldon Kebernik from Alberta, Canada. I just watched a video of him talking about his passion for organic farming! Kind of surreal, right?

This kind of magic comes from One Degree Organic, the only business I know that is this intentional and thoughtful in sourcing quality ingredients from family farmers. They bring food from a farm to your table so there’s only one degree of separation between you and person who grew your food. And they’re a family business too! My friend Sondra’s family runs it, and her son Andrew is very close in age to Larson. (Side note: Larson loves looking at his internet friend Andrew on their organic cereal boxes.)

You can use any oats for this recipe — however, One Degree Organics are the only oats we know of that are sprouted, organic and gluten-free, and traceable to the exact farmer who grew them. What’s the difference with sprouted grains? Sprouted oats boast more nutrients and are easy to digest. But to us, the most compelling thing is getting to see the farmer’s face and hear him talk about his passion for organic farming. Pretty incredible. Thanks to One Degree and Eldon for making these vegan meatballs possible!

Where to buy these organic sprouted oats? Find One Degree Organics in a store near you!

This vegan spaghetti and meatballs recipe is…

Want meatballs without the meat? This vegan spaghetti and meatballs is the best recipe you’ll find: complete with vegan Parmesan on top.

Here are a few more vegan Italian recipes you should try:

Here are a few of our favorite vegan and vegetarian pasta recipes: