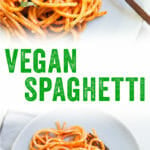 This easy vegan spaghetti has a superb vegan marinara sauce of garlic, shallots, capers, and a bit of cashew cream. Pasta at its finest!

One night after a long night at work, Alex whipped us up an impromptu vegan spaghetti dinner. Rummaging around, he found some canned tomato puree and spaghetti noodles in the cupboard, and a few shallots in the pantry. Digging in the refrigerator, he unearthed some jarred capers and some leftover cashew cream. The vegan spaghetti and creamy marinara sauce that resulted was so good I kept asking him, how exactly did you do that? Of course his response was, I have no idea. He was cooking by intuition. After writing a food blog for years and then writing a cookbook, taking notes while cooking is second nature for us. But this one caught us on sneak attack. Keep reading for the story behind this easy vegan Italian recipe.

The story behind this vegan spaghetti

This vegan spaghetti with creamy marinara sauce has a supremely savory sauce: garlic, shallots, and capers all work together with cashew cream to make as much umami as possible. It’s so.darn.good. After remaking what he thought he did that fated evening several times, Alex was able to recreate the delicious vegan spaghetti he had made on a whim. Since we knew we’d be making this one for years later, this time we made sure to write it down!

We shot the photographs together, and after editing, Alex presented the final photos to me for this post. I couldn’t wait to see the photos of the creamy, comforting vegan spaghetti so I could remember eating it all over again. Except when we looked at them together, there was something not quite right. The image of the pasta was flat and lifeless. Something was not quite evoking the comforting, creamy umami experience that was the vegan spaghetti with creamy marinara. Both of us looked at it and said, Oh.

Alex decided to go back to the drawing board with the same photo. He brought it up in Photoshop and this time put a new filter on it. The new filter made the colors shine and brought in a warmth that was missing from the original image. Then, instead of showing the entire plate of pasta, he cropped in so you could see the gooey details of the sauce and the contrasting tangles of the noodles. This time, when I looked at it, the photo said gooey, creamy, comforting vegan spaghetti.

Why am I telling this story? Because it’s like life, in a way. How many times do we look at an aspect of our lives and say Oh. That’s not quite what I was expecting. There’s something that’s not quite right. And it’s disheartening.

But what if, like Alex, we could apply a new filter to our lives? What if we had a new filter that enhanced the color and brightness? And what if we could crop in to where we could clearly see the detail (and a little bit of the mess!) and realize that what’s there is truly beautiful? A simple change of perspective can cultivate a heart of gratitude, if we let it.

And now, to go eat all the vegan spaghetti with creamy marinara sauce. PS. it’s also a fabulous used as a pizza sauce.

This is an incredibly easy vegan pasta recipe! It takes about 40 minutes to make, but half of that time is hands-off simmering time. Here are a few things to keep in mind when making this vegan spaghetti:

This vegan spaghetti recipe is…

This easy vegan spaghetti has a superb vegan marinara sauce of garlic, shallots, capers, and a bit of cashew cream. Pasta at its finest!

As a fun optional topping, sprinkle with Vegan Parmesan Cheese!

There are so many ways to make an easy vegan pasta. It takes about 40 minutes to make, but A few of our favorites are:

Outside of this vegan spaghetti with marinara sauce, here are a few of our favorite vegan recipes: