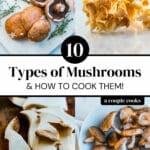 Here are the most popular types of mushrooms and how to use them! These different types of edible mushrooms are each uniquely delicious.

Move over, button mushrooms: there are so many types of mushrooms to enjoy! Button and portobello mushrooms might be the most popular, but there’s a whole world of fungi to discover. These days, more varieties than ever are becoming available at grocery stores in the US, not to mention farmer’s markets! Mushrooms are low in calories and fat, high in vitamins, and best of all: over the top delicious when cooked correctly.

Here at A Couple Cooks, we’ve become mushroom experts: experimenting with each one to find its best qualities. Here are all the most popular types of mushrooms we’ve found at our local grocery stores! There’s a bit about the mushroom, what it tastes like, and the best ways to use it. Whatever recipe you choose: you won’t be disappointed.

And now…types of mushrooms & how to use them! 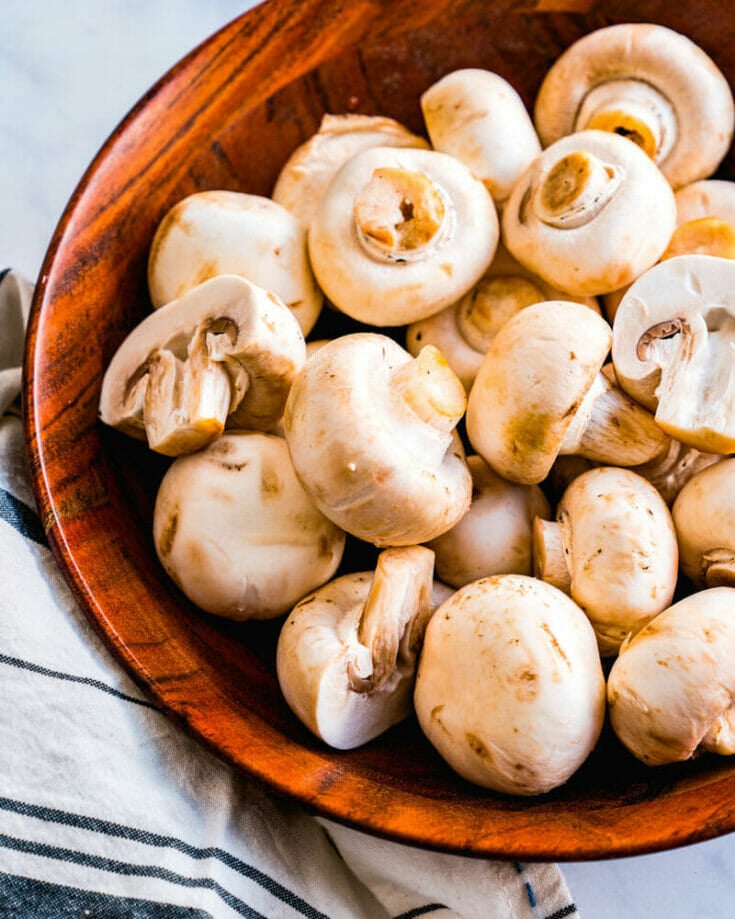 Type: Button mushrooms are a small mushroom with a round top. This variety, scientific name Agaricus bisporus, is one of the most widely consumed in the world. They’re one of the cheapest and easiest to find at grocery stores in the US. This variety is the same as the cremini and portobello, but it's the first growth stage.

Flavor: Very mild; they're great raw and their flavor develops even more when sautéed and grilled

How to use them: Sauteed, grilled, or roasted, stuffed, in salads, in pizza, risotto, pasta, and more 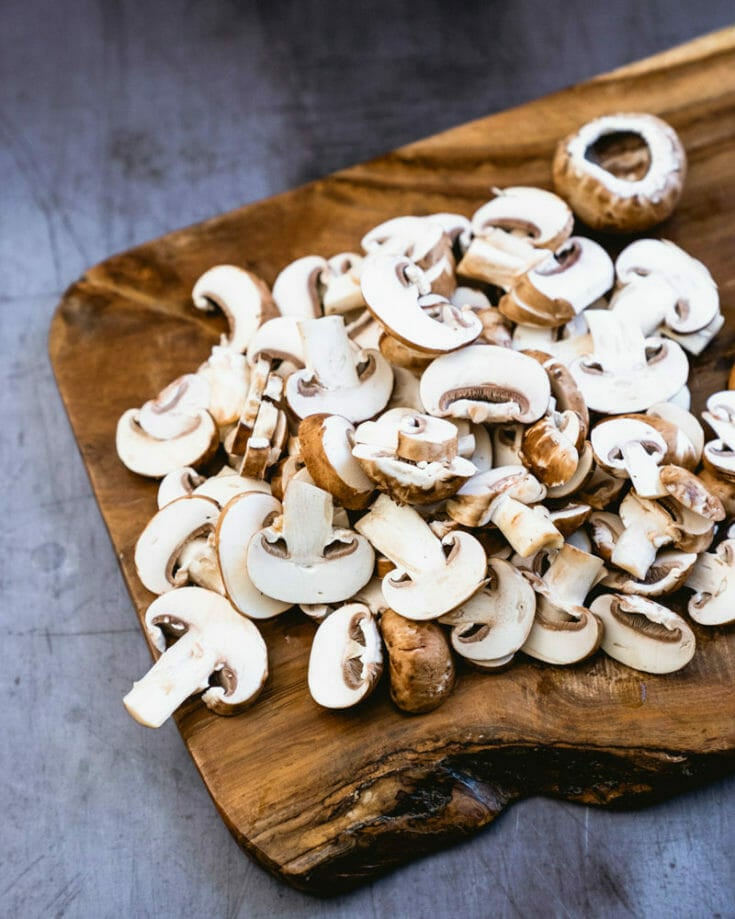 Flavor: Robust, savory and meaty; like a mini portobello

How to use them: Sauteed, grilled, or roasted, in salads, stuffed, in pizza, risotto, pasta, and more 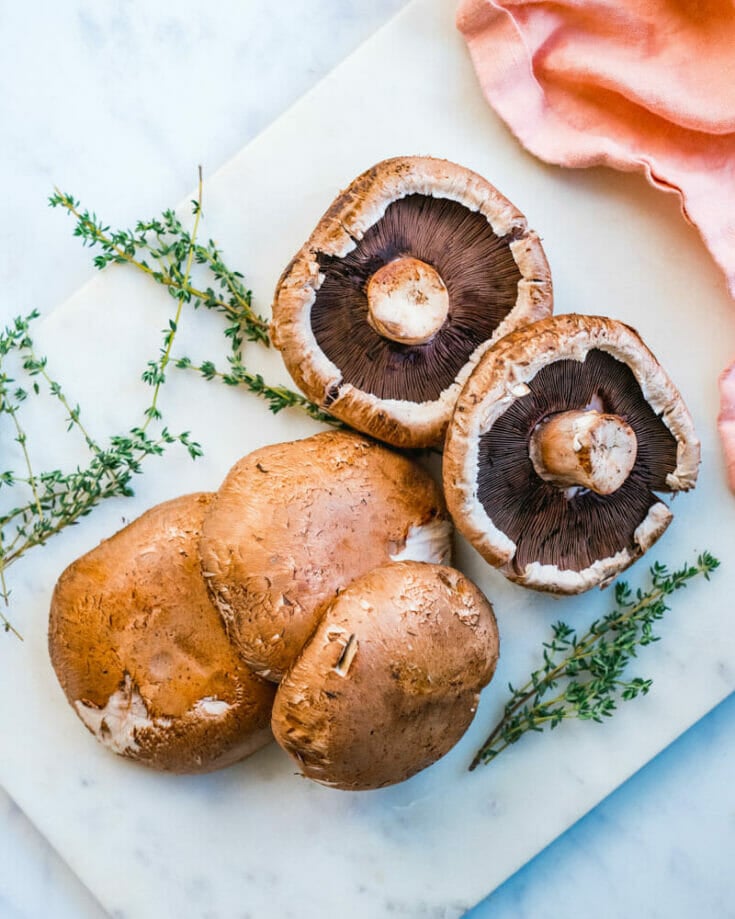 Type: The portobello mushroom (aka portobella or portabella) is one of the most widely consumed mushroom varieties in the world, called Agaricus bisporus. The white mushroom and cremini (aka baby bella) are the same variety of mushroom, just earlier growth stages. The portobello is the oldest stage, so it has the most meaty and savory flavor.

Flavor: Intensely meaty and savory, with loads of umami; ideal for use as a meat substitute (for flavor, not protein)

How to use them: Sauteed, grilled, or roasted, stuffed, chopped on pizza or in pasta, risotto, and tacos 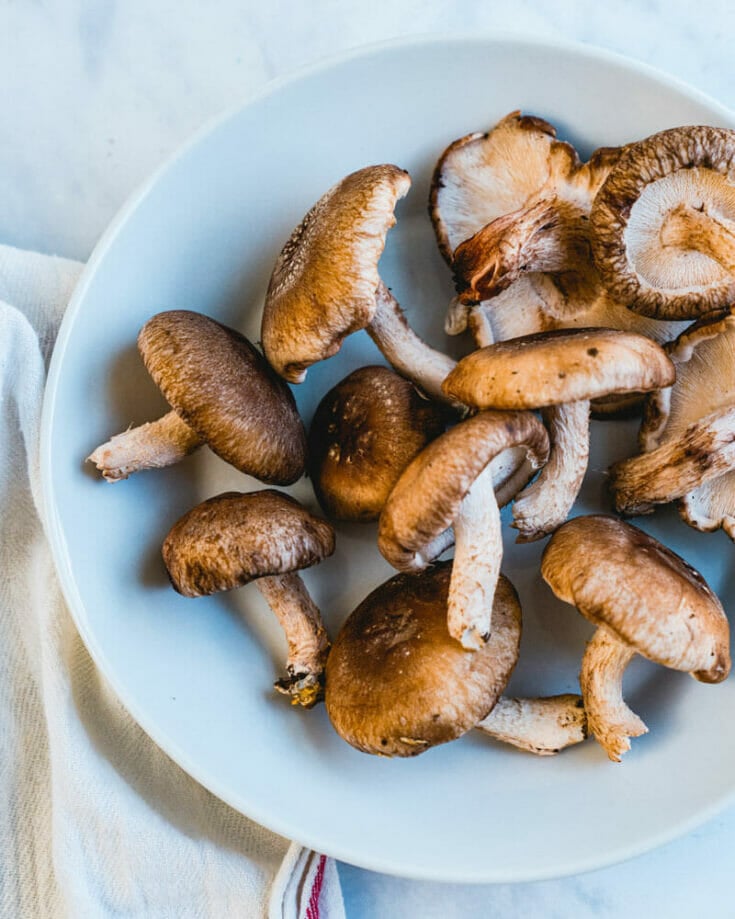 Type: Shiitake mushrooms are one of the most popular edible mushrooms in the world, native to East Asia. They are slender and light brown, with a tough, inedible stem.

How to use them: Shiitake mushrooms are often included in Asian-style dishes like Japanese, Chinese and Korean cuisine. Use them in ramen and stir fries, and they also work in pasta, pizza, and risotto. 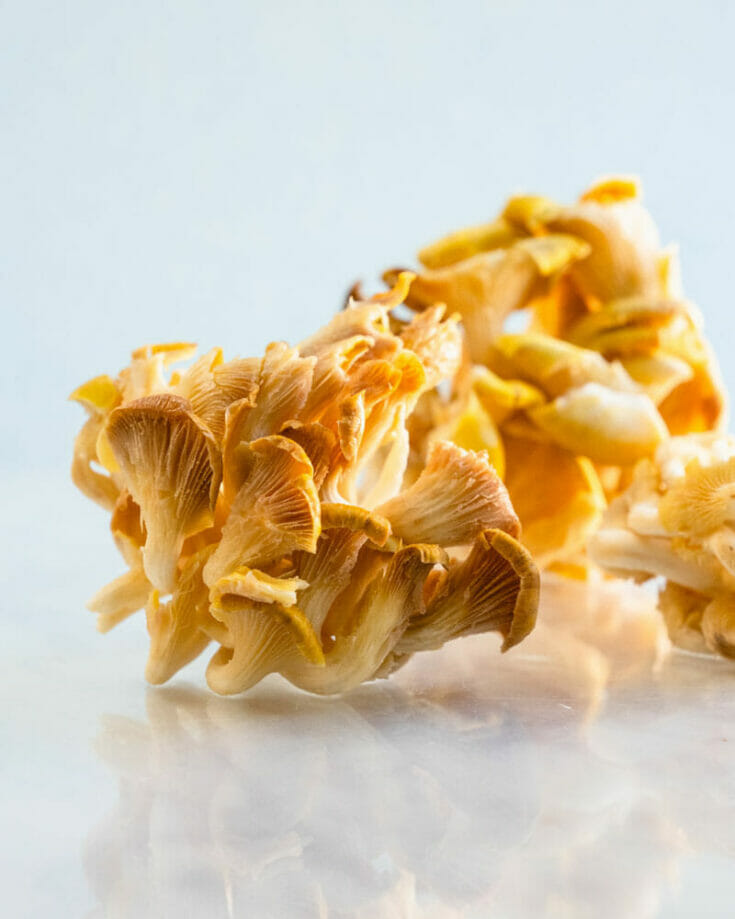 Flavor: Delicate and savory, with a hint of complexity on the finish. Some people say they have a slight seafood flavor, or a subtle anise finish (black licorice).

How to use them: Sauteed as a side dish, fried as a vegan meat substitute, or in sit fries, pasta or risotto 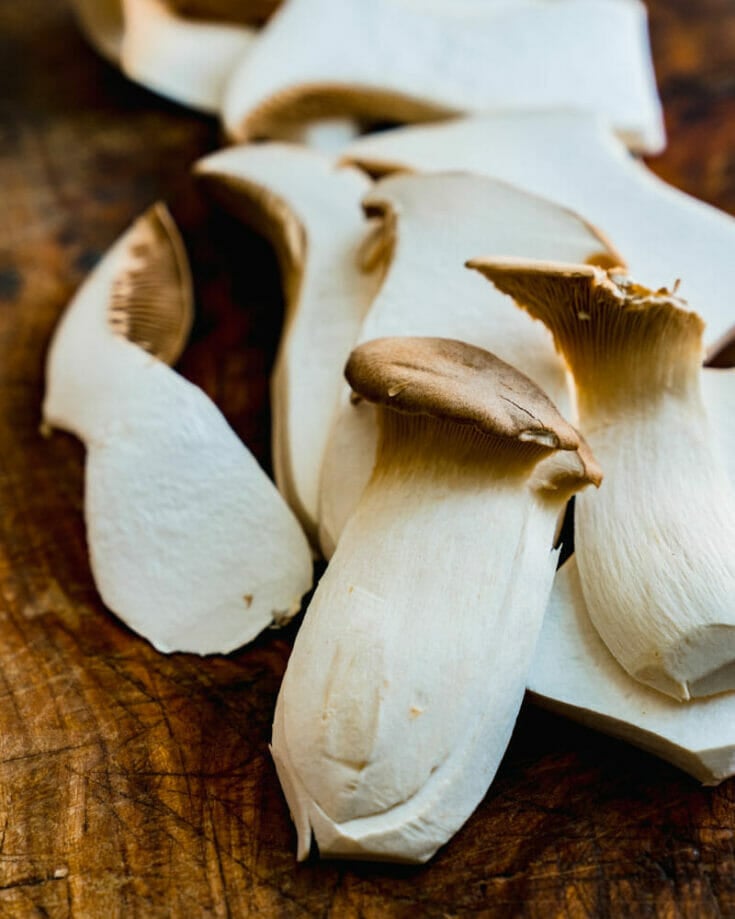 Type: King oyster mushrooms are the largest in the oyster mushroom family. They’re also known as king trumpet mushrooms or French horn mushrooms. They grow individually, instead of clusters like the pearl oyster. Native to the Mediterranean, they’re commonly used in Chinese, Korean and Japanese cooking.

How to use them: Sauteed, in stir fires, or texture makes them a great choice as a meat substitute, shredded with BBQ sauce or as "scallops" 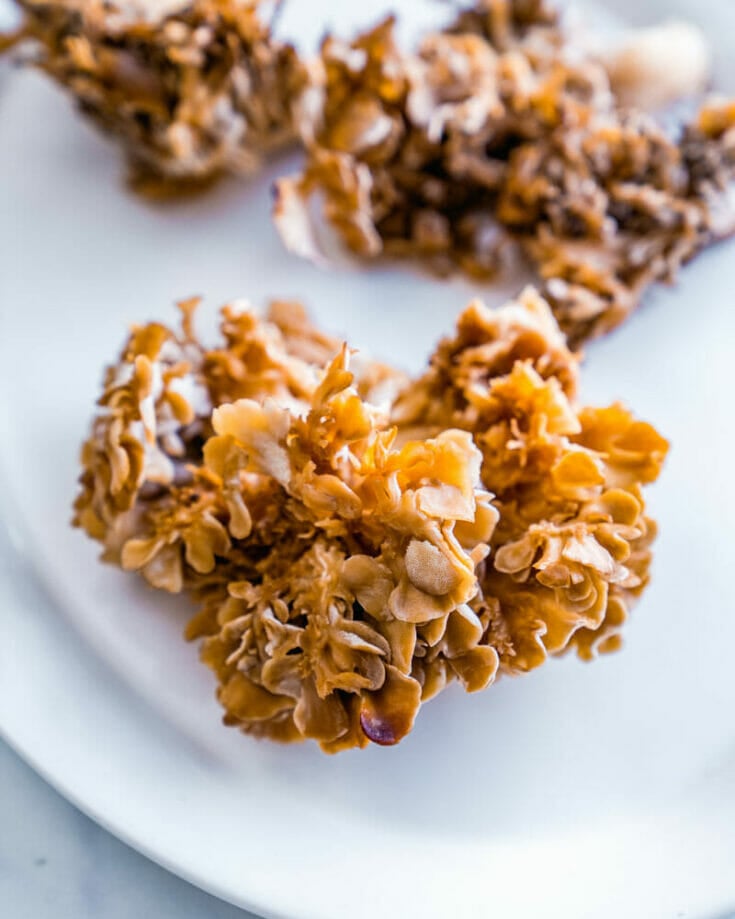 Maitake Mushrooms, aka Hen of the Woods

Type: The maitake mushroom is an edible mushroom that grows at the base of trees; it’s light brown and grows in feathery clusters. Also known as the hen of the woods mushroom, it’s native to North America, Europe and China. It’s been consumed for centuries in China and Japan; in fact, maitake means “dancing mushroom” in Japanese.

Flavor: It has a strong earthy, peppery flavor and is best served cooked.

How to use them: Sauteed, roasted, add to soba noodles, stir fries, pizza or ramen 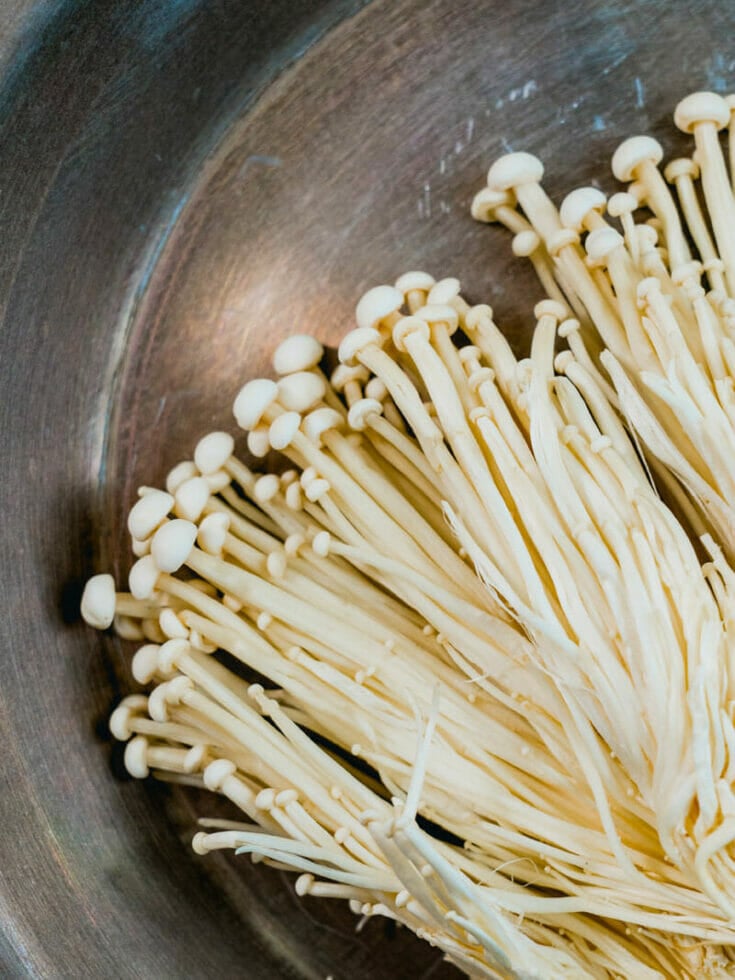 Flavor: Delicate, savory flavor and a crunch from the thin strands

How to use it: Sautéed or raw in salads, or throw it raw into ramen and hot pot and it cooks up right in the broth 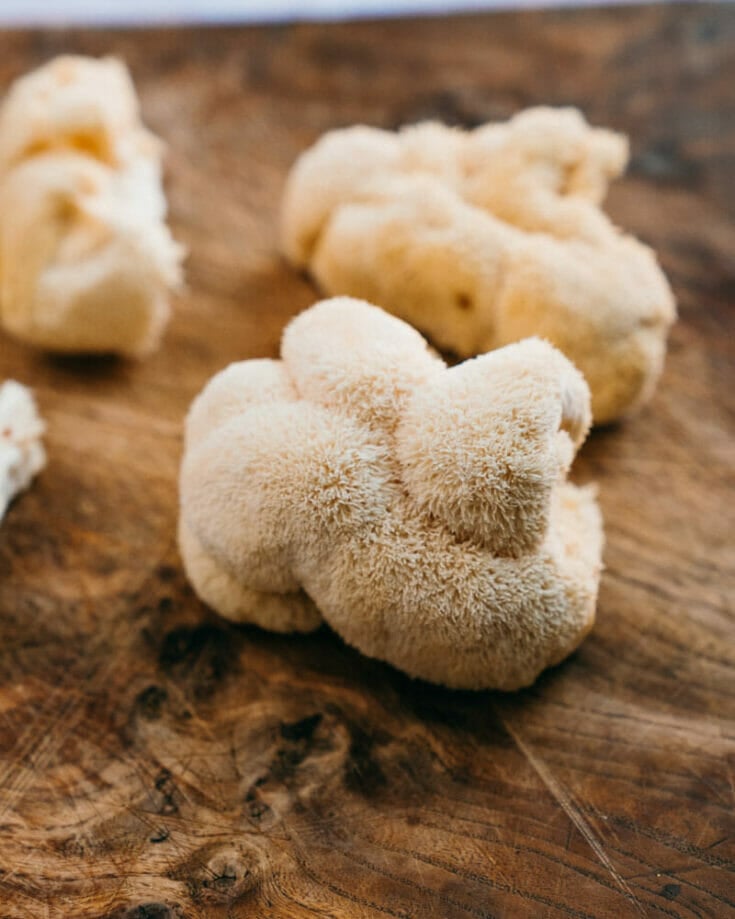 Type: The lion’s mane mushroom is a white fungus with a hair-like texture that bears resemblance to its namesake. It’s also known as the hedgehog mushroom and is native to North America, Europe and Asia.

Flavor: Delicate, tender, juicy and meaty. Some people say it tastes like seafood or crab meat.

How to use it: Sauteed as a side dish, in stir fries, in a sandwich as a vegan meat substitute 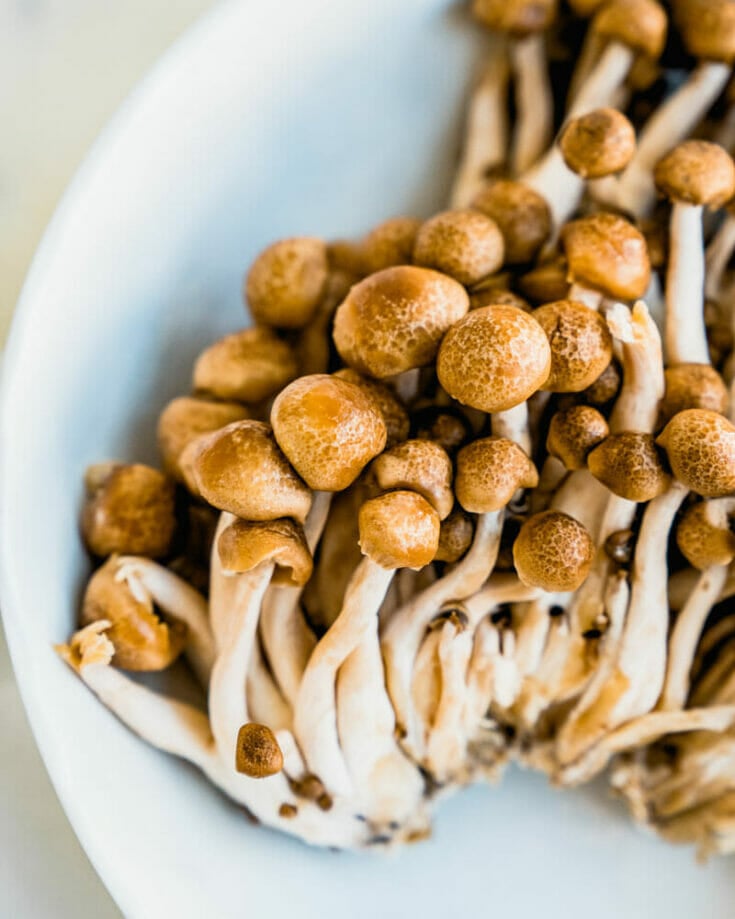 Type: The beech mushroom is an edible mushroom that grows on beech trees, hence the name. They’re also known as shimeji mushrooms or clamshell mushrooms, and native to East Asia (they’re also cultivated in the US, Australia and Europe). They grow in clusters and are small and thin, with round tops.

How to use it: Sauteed as a side dish, in stir fries, soups, risotto, pasta, and soups

Mushroom storage and how to clean

Once you bring home your mushrooms, what’s the best way to store them? And should you wash them before using them? Here’s our two cents:

Want more ideas on how to use mushrooms? We’ve got lots of great mushroom recipes:

*Want recipes for other types of mushrooms like lion’s mane, enoki, maitake, shiitake, oyster and more? See the list above!