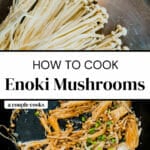 Enoki mushrooms are a beautiful type of mushroom that’s extraordinarily delicious! Here’s a recipe for how to cook this tasty fungi.

Here at A Couple Cooks, we’re unabashed mushroom lovers. So we were thrilled to get our hands on some Enoki mushrooms! This type of mushroom is common in Japanese and Chinese cuisine, but it only recently started to be easy to find at non-specialty American grocery stores. The enoki mushroom is incredibly delicious and absolutely worth experimenting with in the kitchen! Sauté up a bunch, or add them to a bowl of ramen or hot pot. Here’s a bit more about why you should grab some enoki mushrooms when you see them!

You may have seen enoki mushrooms in photographs of ramen or hot pot: it looks like long, white noodles. Here’s what you need to know about this variety:

How to store and clean them

Once you get your enoki mushrooms, what’s the best way to keep them fresh? And how to clean them before cooking them?

How to cook this enoki mushroom recipe

Ready to get cooking? Try this Sauteed Enoki Mushroom recipe! It makes a pan of ultra savory, umami-packed mushrooms that are absolutely irresistible. In fact, I couldn’t stop eating them. After Alex took these photos, I kept sneaking back to the pan and ended up eating them all before he could dig in. Even better, this delicate type of mushroom takes only 2 minutes to cook! Here’s what you’ll do (or skip to the recipe below):

Eat these enoki mushrooms as a side dish, with a stir fry, or throw them into noodles like sesame soba noodles. Keep reading for other ways to serve them…

Don’t want to make sauteed enoki mushrooms? There are lots of other ideas where you don’t even need to cook them separately. Here’s what to do:

Ready to try the recipe? Scroll to the recipe below!

This enoki mushroom recipe is…

Enoki mushrooms are a beautiful type of mushroom that’s extraordinarily delicious! Here’s a recipe for how to cook this tasty fungi.

There are so many other types of mushrooms to try! Sample them all: